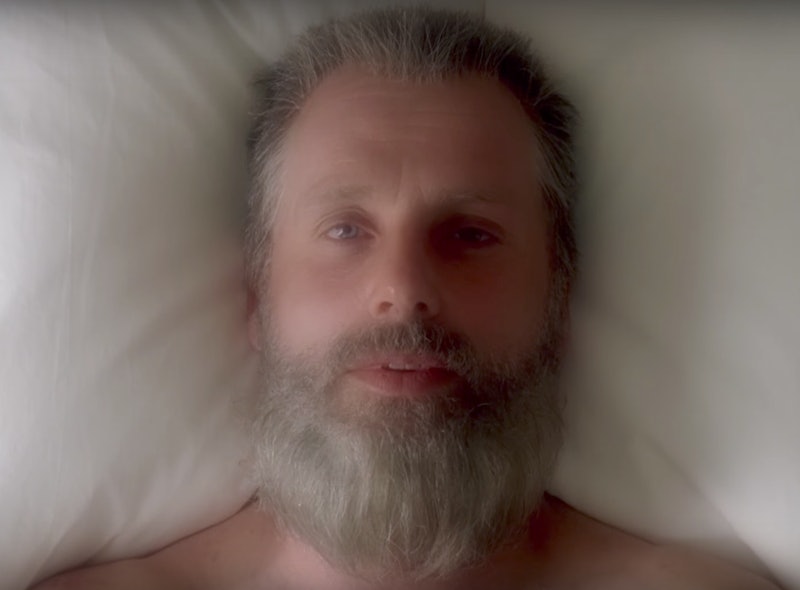 "Old Man Rick" makes his Walking Dead debut in the Season 8 premiere — but if your head hurts from trying to discern what exactly was going on there, you're probably not alone. Spoilers ahead. The "Old Man Rick" scene on The Walking Dead could be Rick dreaming. Or is this a flash-forward to the Grimes family's happy future? There are clues everywhere, and none of them make a whole lot of sense just yet.

In the premiere, a white-bearded Rick wakes up in a bright room filled with flowers. It almost looks like a funeral home, but it is Rick's home in Alexandria. He wakes at 8:23 a.m., and if that isn't a Lost reference, it should be. The whole thing has a real "Sideways World" vibe from Lost Season 6 to it. He has a cane, and a robe, and he seems happy in his supposed retirement.

"We're all playing hooky," says Carl about this happy future day. At the end of the episode, Judith drags Rick outside to look at the preparations for some kind of festival, maybe a harvest festival, that involves a big owl.

"They're going to get you," says Michonne to Judith.

What does this all mean?! The first shot of Rick's face is clearly meant to mirror the pilot, when he initially woke up from a coma. Other than that, everything else is a big, old enigma.

Just the fact that Rick would let his hair get that bad is a mystery unto itself. The beard is fine, not the worst beard in the apocalypse, but why is the top so spiky and patchy? Please don't let that aesthetic be the future Rick wants for himself.

The Alexandria Safe-Zone looks a little different, too. Rick and Michonne's house is relatively the same, some decorative upgrades, but there's a new stone house across the street, and lush gardening going on all around them. You can use AMC's 360 tour of Alexandria to refresh your memory, if you want. It almost looks as if Rick has conflated his home with the Hill Top. Does that mean this isn't the real future?

Also, why have the other characters aged so inconsistently? Judith seems to be about three years older, but Carl and Michonne look the same. We all age at different paces, but it does make one question the reality of the scene.

Even the music has the audience questioning reality. One of the most genius details in the sequence is the use of Weird Al Yankovic's "Another One Rides the Bus." No, Rick is not listening to the original Queen song that may capture the feeling of The Walking Dead's many deaths. It's just a silly parody song about the woes of public transportation, but played so quietly that if you're not listening closely you could get confused. "Hey," says Carl in the episode, "I didn't put that song on." Curiouser and curiouser.

All that said, how many flash-forwards were in the episode? The whole hour is rather ominous. There's also the fact that the show is cutting to two as-yet unexplained scenes: one with Rick by fresh graves, and another that's close on Rick's face, eyes wet with tears, with a stained glass window in the background. Is this when he's imagining that happy future? Those scenes, which often lead into the Old Man Rick fantasy/future glimpses, might be the biggest clues of all as to how Season 8 will play out and lead to this dream and/or future.

Could Rick be grieving a member of his family, or about to die himself? Perhaps that is the explanation for this bizarre flight of fancy. One of the Saviors that Rick kills in the episode threatens/warns him that Carl is going to die.

In Season 7, the group fantasized about a future where Glenn got to have a big group dinner with his baby and all of his survivor family. The most likely answer to Old Man Rick is that it's just this kind of situation all over again. Then again, The Walking Dead loves a good surprise, so never expect the expected and keep a close eye on all these hints.