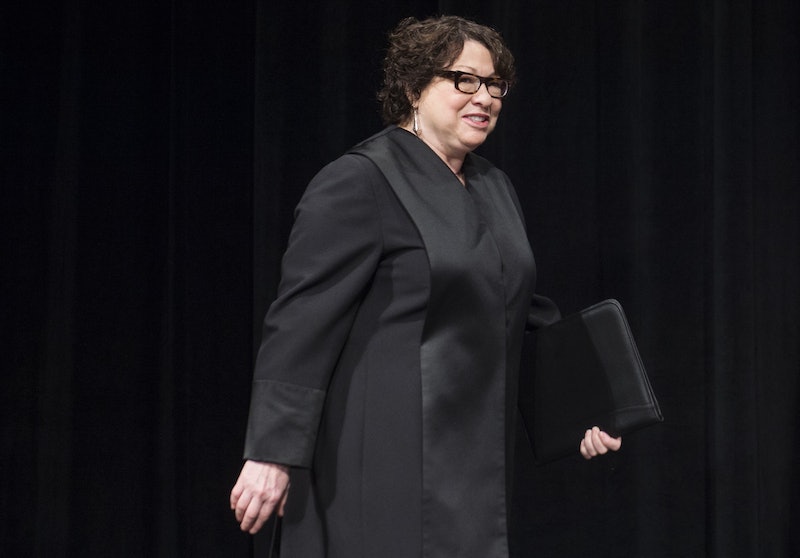 Surprisingly, the guest list for President-elect Donald Trump's inauguration doesn't really indicate how controversial of a candidate he turned out to be. President Obama, First Lady Michelle Obama, former Presidents Jimmy Carter, George W. Bush, and Bill Clinton, along with former Democratic presidential nominee Hillary Clinton are all expected to be in attendance on Friday. From the Supreme Court, justices including Chief Justice John Roberts and Associate Justice Sonia Sotomayor are expected to attend the inauguration. All in all, it is almost hard to tell that Trump has made many skeptics out of the political elite with his unruly campaign.

Sotomayor has remained relatively quiet about her feelings toward Trump. That's to be expected, considering the Supreme Court typically doesn't comment on political matters, in order to remain unbiased. Justice Ruth Bader Ginsburg went against the norm when she called Trump "a faker" back in July. "He has no consistency about him," Ginsburg said. "He says whatever comes into his head at the moment. He really has an ego."

For her part, Sotomayor didn't touch on the Trump issue until after his election. At that time, she still didn't mention him by name, but she nonetheless had some sobering words for unhappy voters. "We can't afford for a president to fail," she said.

We can't afford to despair. And we can't afford to give up on pursuing the values that we and others have fought so hard to achieve. And so for me, this is a challenge: Sonia, continue doing what I think is the right thing. And it's a challenge we all have to face and maintain.

As a Supreme Court justice, Sotomayor will likely have to face Trump's challenging policies and proposals on a regular basis. Trump and the GOP majorities in Congress will also be getting to work appointing Antonin Scalia's replacement to the high court. Not to mention, Trump's immigration policies may come under the court's scrutiny.

It's plain to see why Sotomayor may find it challenging to deal with a Trump presidency. In 2009, she became the Supreme Court's first Latina justice. In 2013, Sotomayor swore in Vice President Joe Biden for his second term. In doing so, she became the fourth female judge in U.S. history to administer an oath of office, according Fox News. In other words, she represents many of the populations that Trump's campaign seemed to marginalize.

Still, she's expected to attend Friday's inauguration, along with her fellow justices. By showing up, Sotomayor will live up to her post-election guidance. She isn't giving up, but rather, pushing through to keep the country and its government successful.