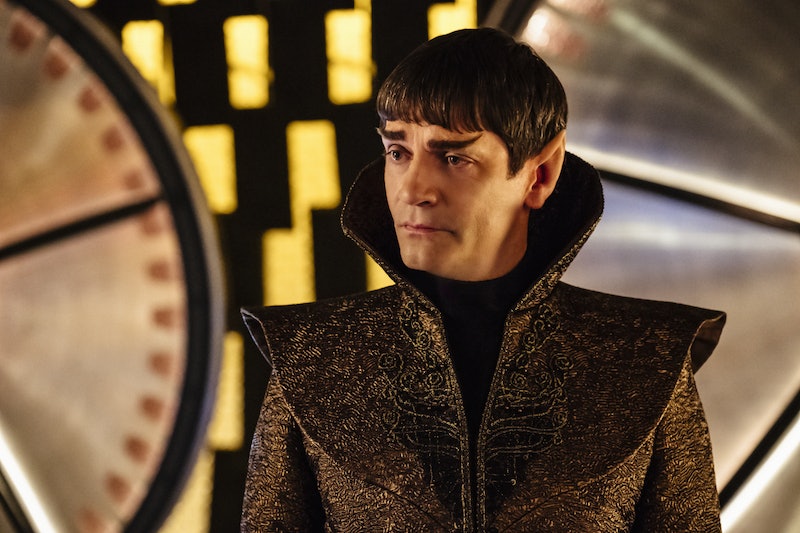 Star Trek: Discovery's hero Michael Burnham (Sonequa Martin-Green) may be a human, but she has a Vulcan upbringing. Her foster family is familiar to Trek fans too — Michael was raised by a certain ambassador whose son also served as a Star Fleet First Officer. That raises the question: will Spock be on Star Trek: Discovery? The timeline of the series definitely makes it possible.

They almost certainly know each other, as Michael lived with Sarek and Amanda Grayson. Discovery takes place in the Earth year 2256, at which point Spock was 26 years old, according to canon. Considering this show takes place ten years before the original series, Michael is probably a little bit older than him. Since they both attended the Vulcan Science Academy and Starfleet Academy, it's not like they missed each other because of schooling.

At San Diego Comic-Con, executive producer Alex Kurtzman assured fans that "We're aware" Spock never mentioned having a foster sister. "You'll see where it's going," he said, "but we are staying consistent with canon." In one of the movies, Spock also has a brother named Sybok that he doesn't talk about. If Zachary Quinto and Winona Ryder, who play Spock and Amanda respectively in the J.J. Abrams Trek movies, maybe a version of that character will show up on the new series.

In an interview with IGN, Martin-Green said that there is "certainly room" for Spock to appear on Discovery in some form, even if it's just a flashback. “I can be brutally honest," Martin-Green said, "and say I think it is quite genius the way that they have weaved me into that story. It is something that seems very normal when you see it. It makes so much sense. It’s not what you’d expect, but it does make sense."

That's definitely intriguing. What does it mean? Does Spock hate her or something? The first two episodes gave us a taste of Michael's relationship with Spock's father Sarek, played by James Frain, but her history with the family has not totally been revealed. Maybe Spock finds it illogical to refer to Michael as his sister and considers her a friend, instead. Sarek and Amanda truly have an impressive family. Michael was the first human to attend the Vulcan Learning Center, and Spock was the first Vulcan to enlist in Starfleet. They should be very proud.

It will also be interesting to see how much of Vulcan has shaped Michael as a character. How does someone born with human emotions raised in a world that has minimal use for them? Even in the two episodes that have aired, there is a noted change between Sarek's ward the first time she boarded the U.S.S. Shenzhou dressed in full Vulcan garb and where the series kicks off with her as a slightly renegade first officer. Her hairstyle is a clear nod to her upbringing as well — but after a few years with humans she's not quite as serious anymore.

Michael's "entire life is a sort of inner war," Martin-Green said in a behind the scenes interview for CBS AllAccess, "between Vulcan influence versus human emotion." It may give her an edge at Starfleet to have that logical perspective, but there's personal conflict there as well. "It's in essence 'nature versus nurture,'" said Martin-Green.

Star Trek: Discovery is its own series with its own characters and its own stories, so even if Spock does cameo in some form, it won't likely be more than that. Such an iconic character could become a distraction. If you're desperate to learn more about their relationship, Spock and the U.S.S. Enterprise do feature in the new Star Trek: Discovery novel Desperate Hours set one year before the premiere. Even if Spock never appears on the AllAccess series, he's a part of the lore. For Trek fans old and new, that's pretty cool.