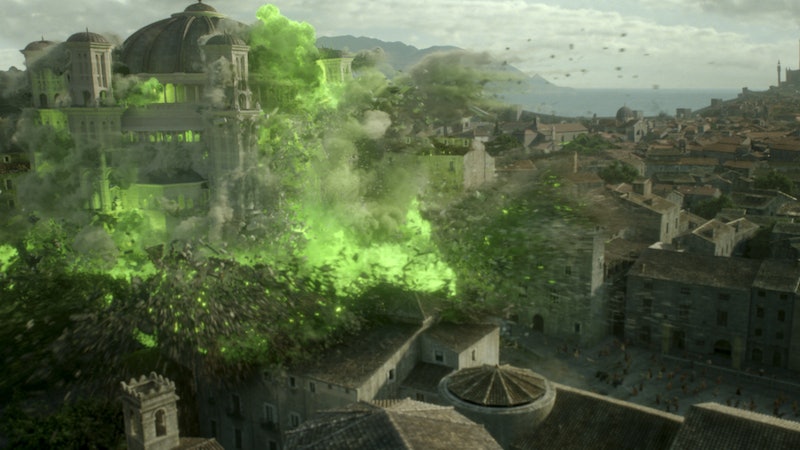 As the Lannisters have shown us multiple times on Game of Thrones, wildfire destroys wood, stone, steel, and flesh. It also was the preferred weapon of Daenerys' father Mad King. So what better weapon for the Battle of King's Landing? It's not clear if there is still wildfire in King's Landing on Game of Thrones after Cersei used it to blow up the Sept of Baelor in the Season 6 finale. But even if she used up all of King Aerys II Targaryen's stash, Game of Thrones has established that wildfire can be made. So this green substance may fittingly make a return during the battle between Cersei Lannister and Daenerys Targaryen.

In Season 2, pyromancer Wisdom Hallyne was in charge of the city stocks of wildfire. He said, "After the dragons died, wildfire was the key to the Targaryen power." The alchemists had perfected the creation of wildfire since Maegor Targaryen. But once the Mad King, Aegon II, was killed by Jaime Lannister, wildfire wasn't produced anymore. That is until Cersei ordered Hallyne and the Alchemists' Guild to begin making it again as a way to defeat Stannis Baratheon. Tyrion then used the 7,811 pots of wildfire to defeat Stannis' army in the Battle of Blackwater Bay.

Wildfire wasn't used as a weapon again until Season 6. But Jaime had told Brienne in Season 3 how the Mad King had stored wildfire "all over the city — beneath the Sept of Baelor and the slums of Flea Bottom. Under houses, stables, taverns. Even beneath the Red Keep itself." And so when the High Sparrow had seized control over the kingdom via Tommen, Qyburn investigated the rumors that these caches of wildfire still existed. They did and Cersei used them to blow up the Sept of Baelor to destroy her enemies and become queen.

The explosion was contained to the area around the sept with the Red Keep being untouched. That could mean there is still wildfire located in the very same castle that holds the Iron Throne, plus other areas of King's Landing. But the Red Keep would be the worst area to still have wildfire underneath it since Cersei invited the citizens of King's Landing to live within its gates during "The Last of the Starks."

Even if Cersei used all of the wildfire that Aegon had left when she blew up the Great Sept, the events in Season 2 show she knows that she can always create more. Perhaps the Alchemists' Guild is gone, but Qyburn clearly loves a good experiment (*cough* Zombie Mountain*cough*), so he could be making more. And Cersei clearly has no qualms destroying buildings and people if it means she can retain her power.

However, what's interesting to consider is how the wildfire could actually lead to Cersei's destruction. When wildfire is hit with regular fire, it ignites immediately with devastating consequences. Daenerys has Drogon, so if his dragon fire hit those pots of wildfire, the Mother of Dragons could unintentionally blow up a huge part of King's Landing — which, hey, maybe that's part of Cersei's plan to mess with Daenerys since she knows that the Dragon Queen is more merciful than her. (Remember that, Mad Queen Daenerys theorists.)

Then there's the fact that there are secret tunnels throughout King's Landing. Back before the Battle of Blackwater Bay, Varys presented Tyrion with a map that showed 50 miles of tunnels underneath King's Landing. "The Targaryens built this city to withstand a siege and to provide escape if necessary," Varys said. So if Daenerys' advisors don't betray her, her army may be able to enter King's Landing through those tunnels — and maybe realize there is wildfire stored underneath the city before it's too late.

Whether Daenerys, Cersei, or no one wins the Battle of King's Landing, it seems that wildfire could come into play again. Especially when you remember Daenerys' vision in the House of Undying where she saw a destroyed throne room. While it seemed that this was a sign the White Walkers would destroy King's Landing, maybe it's a sign that wildfire and/or dragon fire will be what ruins the Great Hall. So prepare yourself for an explosive ending courtesy of both queens on Game of Thrones.