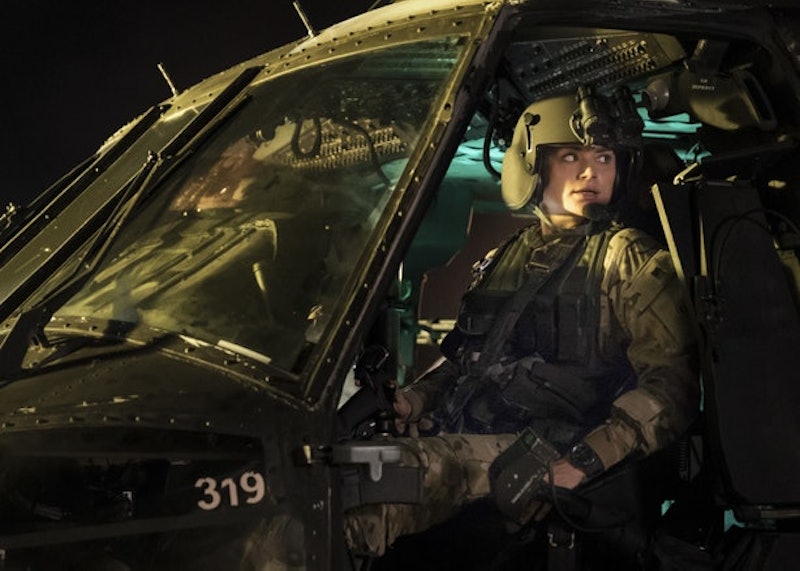 All of a sudden, TV series about the military are all the rage. In what many TV fans perceive as an attempt to appeal to the working class populace of Middle America who voted in Donald Trump as president, just about every big network has a flag-waving new show about the U.S. armed forces. CBS, who always went for that demographic anyway, has SEAL Team, NBC is going with The Brave, and then there's The CW's Valor. The show looks much grittier and realistic than the fantasy YA-focused network's usual fare, but is Valor based on a true story?

It's not. The series is a complete work of fiction, created by writer and musician Kyle Jarrow. The plot centers around a small group of elite helicopter pilots who try and balance their personal lives with their intense — and at times controversial — missions. Here's the series' synopsis, according to Deadline's Nellie Andreeva:

In Valor, the boundaries between military discipline and human desire are tested on a U.S. Army base that houses an elite unit of helicopter pilots trained to perform clandestine international and domestic missions. The drama unfolds in the present as well as in flashbacks to a failed mission involving one of the first female pilots in the unit, ultimately uncovering layers of personal and government/military secrets and leading to a season-long plan to rescue a group of MIA soldiers.

But just because the show's story is made up, that doesn't mean it isn't taking some inspiration from real life. In an interview with Red Carpet Report at the show's preview at PaleyFest, Jarrow revealed that he was at least partly inspired to create the series by his brother, who is an army veteran. "My brother was in the army," Jarrow said. "He's a veteran, and so I kind of always wanted to write about his experience, so he's been a big inspiration." Jarrow went on to describe how the series is a character drama at heart, but the military setting ramps up the intensity from the typical television drama. "There is action of course, but it's really about the relationships between these people. Work relationships, love relationships ... people in the military are people like us," he said. "They are loving, they are cheating, they are lying, they are trying to figure things out, and then when they go to work, they're risking their lives. And that just feels like a really fascinating thing to explore that, frankly, normal people don't experience that last part of it: Risking their lives every day."

Another real life inspiration in the show is its female lead. Christina Ochoa portrays Chief Warrant Officer 3 Nora Madani, one of the first females in her special forces unit. Jarrow got this idea from the fact that special ops forces in real life have just recently begun admitting women to combat positions, something that Nora struggles against in the series. "Special ops in real life has just very recently been taking female pilots in combat-forward positions," Jarrow said last summer at the Television Critics Association press tour, according to The Hollywood Reporter's Kate Stanhope. "It's really the first special ops combat position that has been available to women, and that struck me as really important and a really fascinating story."

Adding authenticity to the women in combat aspect of the series are two female veteran advisers in the writers room. "They are very dedicated to giving us authenticity," showrunner Anna Fricke said of the veterans, according to THR. Fricke also revealed that the series' decision to put a woman front and center of its military drama was inspired by the current political landscape, and they're hoping they can bring about some change with their positive depiction of Nora. "It makes a political statement," she said. "Bringing strong, empowered females to the forefront in telling these stories and their fight and showing them as nuanced and filling them with subtleties … is incredibly important, especially nowadays, if we have the opportunity to take this as a our little soapbox and have a platform for that voice. I'm incredibly proud to be a part of any project that has that mission."

Valor may not be a true story, but its focus on a female special ops combat pilot, and its input from real life veterans, make it a realistic military drama nonetheless.

More like this
UK Viewers Will Have To Wait To Watch The Handmaid’s Tale S5
By Maxine Harrison
This Episode 6 Moment Foreshadows Viserys' Fate On 'House Of The Dragon'
By Grace Wehniainen
Nicola Coughlan Shared A Lady Whistledown Excerpt From ‘Bridgerton’ Season 3
By Grace Wehniainen, Alyssa Lapid and Sam Ramsden
A New 'And Just Like That' Table Read Pic Confirms A Key Character's Return
By Jack Irvin and Grace Wehniainen
Get Even More From Bustle — Sign Up For The Newsletter