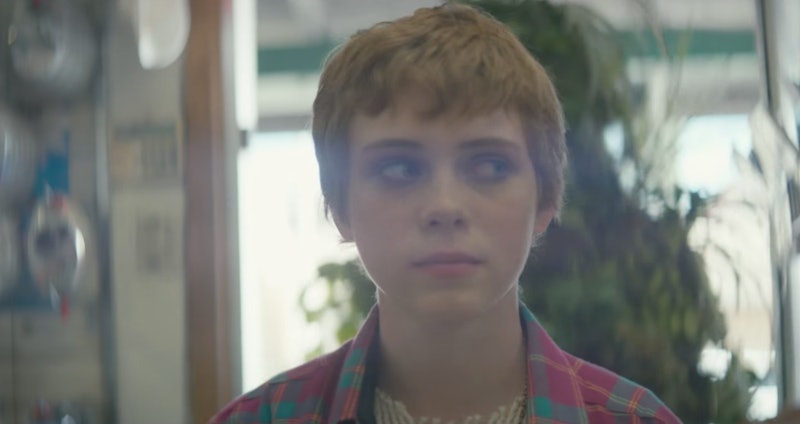 "Gen Z" constitutes the generation of people born after 1995, and just as their nickname suggests, they're extremely cool. Among the members of the post-millennial generation is Sophia Lillis, who recently starred in It as Beverly Marsh, the one girl in the "Losers’ Club." As anyone who went to middle school knows, usually the people considered losers turn out to be the best people, and Marsh is no exception. Lillis appears in The War On Drugs' music video for "Nothing To Find," with a shorter 'do, but the same level of cool. And, basically, the It star's about to become your new favorite, if she isn't already.

The song is off the band's new album, A Deeper Understanding, and its video features Lillis as a young hoodlum on her adventures with — wait for it — a green plant monster. She and her plant friend go on adventures together and take care of each other in a strange yet heartwarming way, and it's everything you'd expect from an edgy 15-year-old like Lillis. The video also has a nostalgic tone that makes a compelling case for Lillis joining the cast of Stranger Things, especially considering that her short haircut in the music video is reminiscent of Eleven's equally awesome hairstyle.

If that video doesn't make you wish you were a wandering teenager whose shrubbery-friend follows you around on cross-country roadtrips, nothing probably will. And if you loved watching Beverly Marsh join her friends in their fight against an evil clown in It, you weren't alone. "I learned about her and how strong she is and how desperate she is. It was kind of like someone I wanted to be: how brave she is, and how she went head-on to defeat this clown that could have killed her at any second," Lillis said in an interview with Vanity Fair.

Her involvement with the album called A Deeper Understanding is appropriate, because the actions of her peers reveals that Gen Z is a force of socially aware and thoughtful individuals. From Rowan Blanchard to Yara Shahidi to Millie Bobbie Brown, the young female stars of the film and TV industry demonstrate an unbelievable level of confidence and boldness that should give everyone some hope that get better with these people coming of age. Stars like Blanchard frequently take to social media to discuss important topics like women's reproductive rights, Black Lives Matter, and most recently, the hurricane devastation in Puerto Rico.

On a recent photo on Instagram, Blanchard wrote, "This Women’s Equality Day join me by taking a stand. 1 in 5 women in the US has relied on a Planned Parenthood health center at some point, and they need our help now more than ever." So, next time someone chastises you for using social media too much, you can tell them that you're helping to save humanity like the rest of Gen Z.

The young actors in Hollywood today are certainly full of surprises, and it seems they even surprise themselves with their depth. In her Vanity Fair interview, Lillis described Marsh's relationship with the "Losers’ Club," saying, "Those are the only friends that she had. She was desperate when she realized the gang was falling apart. That was the closest she’d ever gotten to having a person who actually loved her.” Then, after reportedly pausing and laughing, Lillis added, “Wow, that was depressing!”

It's no great shock that what Lillis and her peers say in interviews are often uncannily profound, because growing up with social media and technology being what it is today, the Gen Zs are likely more aware of the human condition at a younger age than any generation before them. It will certainly be fun to see what else Lillis surprises us with, whether it be music videos or movies.

More like this
Everything To Know About Taylor Swift’s 10th Studio Album, 'Midnights'
By Grace Wehniainen and Jake Viswanath
Lizzo Twerks While Playing James Madison's 200-Year-Old Crystal Flute Onstage
By Radhika Menon
Twitter Is Freaking Out Over Rihanna’s 2023 Super Bowl Halftime Show Announcement
By Stephanie Topacio Long
Craig David Is Still Slicker Than Your Average
By Olivia-Anne Cleary
Get Even More From Bustle — Sign Up For The Newsletter