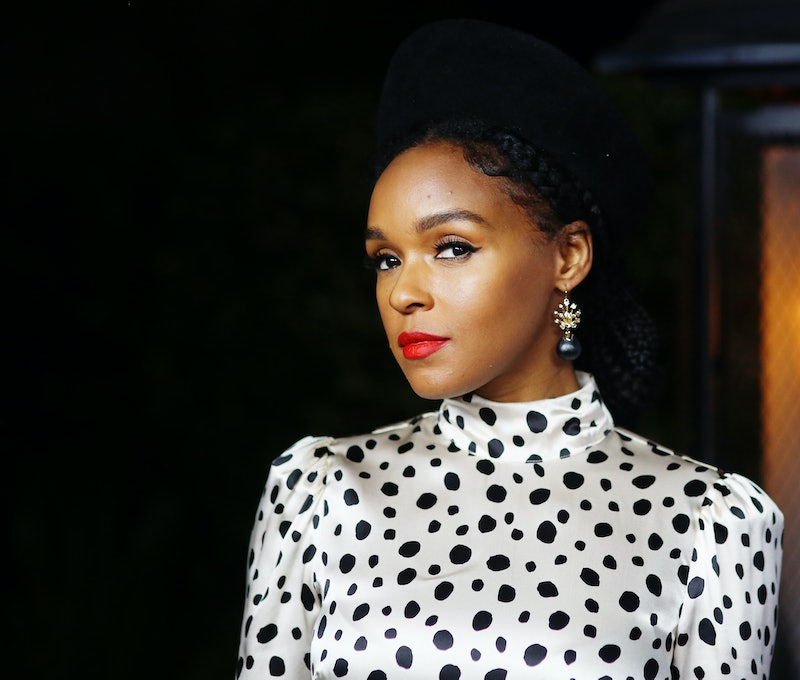 Christian Louboutin hosted the ultimate shoe lover’s fête Monday night in Paris, where he unveiled L’Exhibition[iste], the largest-ever exhibition dedicated to the designer’s work. Janelle Monáe, Karlie Kloss, Diane von Furstenberg, and a host of other celebrities and tastemakers attended the exhibit opening, which took place at the Palais de la Porte Dorée museum with a cocktail party and private dinner.

Ever the detail-obsessed dresser, Monáe stepped out in the ultimate coordinating look: a black tuxedo, red and black candy cane-inspired boots, and a matching ponytail. Yes, the electric lady herself wore a red ribbon in her hair that perfectly complemented her striped Louboutin boots. She topped off the ensemble with heart-shaped earrings and a matching choker, as well as silver rings and a bright red manicure. The entire outfit was an ode to Louboutin’s signature red and black color palette.

Born near the museum in Paris’ 12th arrondissement, Louboutin first began visiting the Palais de la Porte Dorée in his adolescence. During one particular visit, he noticed a sign prohibiting visitors from wearing high heels, which ultimately inspired his career trajectory and one of his most iconic designs: the Pigalle pump.

“Every shoe to me has a personality,” Louboutin told The New York Times ahead of the exhibit opening. “Every shoe has a connotation to me. I probably almost name all my shoes by characters or by attitudes or by just anecdotes which are coming in my head.”

Monáe’s appearance at the opening of Louboutin’s buzzed-about exhibit came just a few days after she attended the 51st Annual NAACP Awards in Los Angeles, where she wore a Balmain gown that featured a black crop top and a floor-sweeping orange skirt. She finished that look with Stuart Weitzman heels, Jennifer Fisher jewelry, and a statement necklace by Alexis Bittar.

The Harriet star has been on quite the high-fashion tour in recent weeks. At the 2020 Oscars, the multi-hyphenate wore a stunning silver gown by Ralph Lauren, complete with a sparkling headpiece and an open back. Accessorizing with a dazzling choker, a swoop bang, and fiery red lipstick, Monáe successfully pulled off one of the best-dressed looks from Oscars night.

This article was originally published on Feb. 26, 2020