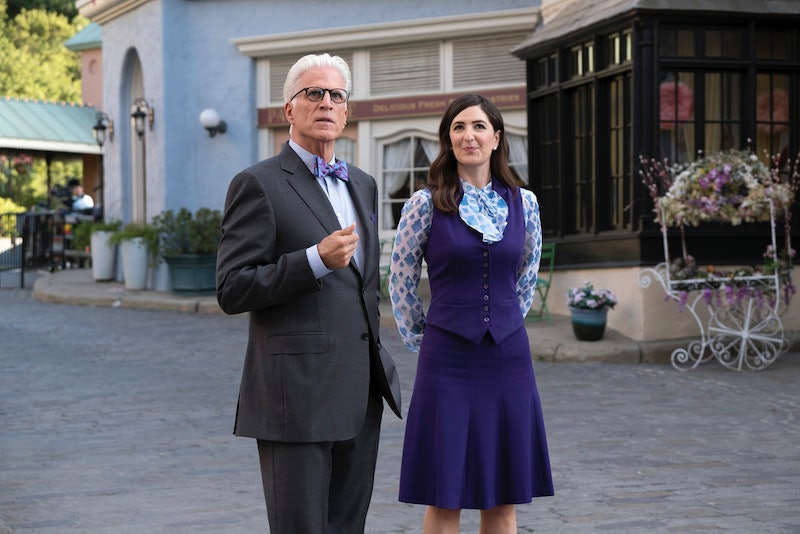 The premise of The Good Place might lead you to believe that the sitcom is more than a little cynical — but this hopeless place has got a lot of heart. Even demons and sentient databases can find love and experience personal growth. Janet and Michael's friendship on The Good Place prove that in a really sweet way.

The main gang doesn't appear much in the Thursday, Oct. 26 episode. The four humans are off being tortured by Vicky while Michael helps Janet diagnose and cure her glitches. Flashbacks reveal how Michael stole Janet from the real Good Place, and how she helped him design his experiment. She came up with the frozen yogurt restaurants in the first attempt! They have quite a history in this weird little afterlife world.

Michael and Janet ultimately put together that Janet's deeply buried romantic feelings for Jason are what's causing the glitches. She's lying about being happy for him without realizing it. Janet's solution? Kill her. Not the button way that reboots her and erases her memory. That's just a temporary solution that will ultimately make her pangs for Jason stronger. What Janet suggests is a more permanent death that turns her into a marble and shoots her into space. Like you do. She asks that Michael just kill her and steal a new Janet, thus restoring balance to the neighborhood.

But Michael can't do that. He can devise an elaborate Sartre-esque torture neighborhood for four morally mediocre humans. He can lie to his boss and kick a puppy into the sun. But he can't kill Janet. Setting her to self-destruct would solve all of his problems, but he has a conscious after all.

"The reason is friends," Michael exclaims, after Janet presses him to explain his hesitation. "You're my friend, Janet. That's why I can't kill you. We have been through so much together. Sure, for you, each time I rebooted you, you met me all over again. But for me, our relationship has become important. You're my oldest, my truest, my most loyal friend. I can't just get rid of you, or replace you with some other Janet I don't even know."

Not only is this super sweet, but it means a lot for Michael's path towards becoming a good, or at least a better, being. He cares about someone! He has a heart, or whatever the demon equivalent of a heart may be! Sure, Janet's emotional maturity has to do with her many reboots leading her towards sophistication and actualization. Her journey is more of a metaphor for what people go through in life.

At the end of the episode, Janet consults Eleanor and gets a human solution to her very human problem with Jason. Instead of offing herself, Janet is going to do what she says and "go get it girl"... whatever that means. She uses her newly defined friendship with Michael to criticize his signature style, and makes herself a rebound boyfriend named Derek played by actor Jason Mantzoukas.

Also, fingers crossed that Janet stands next to a powerful array of magnets and gets loopy soon — the closest thing she says she can get to being drunk. That's something we've got to see on The Good Place, along with Janet's void home.

Finally, it's nice to know that Michael was never really abusing Janet, a truly pure not-lady. He may have been lying to her about his true purpose and plan for the neighborhood, but he also confided in her and shared something with her. Maybe Michael was never really as cruel as he thought he was. Maybe Janet was always a little more human than she thought she was. This adorable bond that we have kind of proves it.

More like this
Paul Mescal, Man Of Mystery
By Samantha Leach and Heather Hazzan
Mike Flanagan Teases 'The Midnight Club' In This Exclusive, Creepy Clip
By Grace Wehniainen
'Grey's Anatomy's New Intern Got Advice From Dr. Bailey Herself
By Grace Wehniainen
Glenda Cleveland Died 2 Decades After Trying To Turn In Neighbor Jeffery Dahmer
By Brad Witter
Get Even More From Bustle — Sign Up For The Newsletter