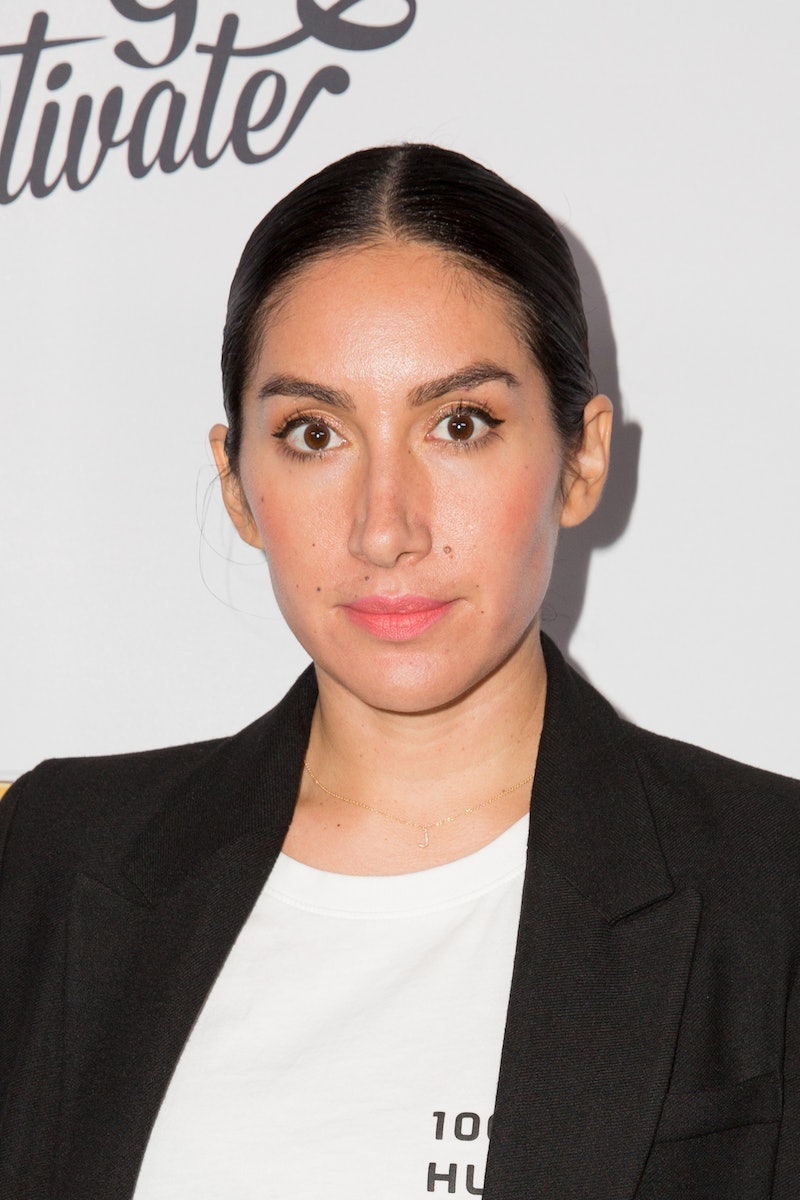 In Bustle’s Q&A series 28, successful women describe exactly what their lives looked like when they were 28 — what they wore, where they worked, what stressed them out most, and what, if anything, they would do differently. For Bustle's beauty issue, Advice Haul, celebrity hair stylist and OUAI founder Jen Atkin reveals the one piece of advice she'd give her 28-year-old self if she could do it all over again.

These days, Jen Atkin's roster of celebrity clients is rivaled only by her roster of celebrity BFFs, but the 38-year-old hair stylist to the stars tells Bustle that when she was 28, her life probably looked a lot like yours. At the time, she was living paycheck to paycheck in Los Angeles, dancing along to Lady Gaga at bars with her friends, and avoiding the dentist at all costs. It wasn't always the most glamorous, she says, but she was working as a hair stylist, doing what she loved — she thought she'd already reached her "career high."

Fast forward 10 years, and Atkin now sits atop what can only be described as a hair care empire. Her product line, OUAI, became an instant favorite after launching in 2016, thanks largely in part to its set-and-forget approach to styling (its celebrity Instagram following didn't hurt, either). Her regular rotation of clients includes A-listers such as Karlie Kloss, Gigi and Bella Hadid, and *multiple* Kardashian-Jenners, who you'll also occasionally find gracing her Instagram feed (Atkin, NBD, has almost three million followers).

Still, Atkin says her goals right now remain largely the same as they were back when she was 28 — she just wants to help women feel their absolute best. Here, Atkin opens up about her biggest stressors when she was 28, her greatest idols, and the single piece of advice she wishes she could go back and tell her younger self.

Take us back to when you were 28. Can you describe exactly how you were feeling and where you were?

I was just starting to shift from salon stylist to editorial. I remember working on Diana Jenkins’ coffee table book Room 23 [which featured celebrities photographed by Deborah Anderson in a Beverly Hills hotel], and she gave me the opportunity to work with Cindy Crawford, George Clooney, Lindsay Lohan, etc. It really helped catapult my career and helped me get an agent. I was feeling really excited about my future at 28. I also remember meeting a cute guy in February 2008 named Mike Rosenthal.

I was splitting my time between Chris McMillan Salon and working freelance as an editorial stylist. I was also doing extensions for Nicole Richie, Lindsay Lohan, Avril Lavigne, etc.

"I had no savings account and being freelance was always scary. I never went to the dentist or doctor because I couldn’t afford it."

What was the biggest thing you splurged on when you were 28?

I remember saving money to get my first designer bright yellow Givenchy bag. (Pic below.)

What was your dream job? Did you think you'd be doing what you're doing now?

I never thought I would have my own product line. But I loved doing hair, so at 28, I had hit my career high… or so I *thought.*

Where did you live? Describe what your house/apartment looked like.

I had a roommate and lived in West Hollywood in a modern townhouse.

What did you think your biggest obstacle was when you were 28? What was your biggest source of stress at the time?

Living paycheck to paycheck since I moved to L.A. at age 20. I had no savings account and being freelance was always scary. I never went to the dentist or doctor because I couldn’t afford it. I also went to Planned Parenthood and I am so grateful I had it as an option!

What's the one piece of advice you wish you could go back and tell your 28-year-old self? Is there anything you'd tell her to do differently?

Stop drinking because it ages you. Everything else, you’re good. Oh also, you’re gonna be hustling for a long time, so get ready.

Describe your favorite outfit and beauty look from when you were 28.

Lots of headbands. Rachel Zoe was a god and I just copied whatever her clients had on. We loved a chunky YSL Tribute shoe (I had the knock-offs), and an oversize bag and sunglasses.

Anything in your wardrobe or makeup bag that immediately brings you back to that time?

Chunky long necklaces. I still have a few. Also layered thick gold necklaces, and my snake gold bracelet that I still wear from Roseark.

Tell us about the type of music you were listening to when you were 28. What was the one song you had on repeat?

Jay Z and Radiohead. I still listen to both on the reg. "Just Dance" by Lady Gaga. "Love In This Club" by Usher. I was going out a lot.

"I have the same goals to make women feel good, but on a much bigger scale now."

What was your go-to book or TV show?

The Secret [by Rhonda Byrne] and The Alchemist [by Paulo Coelho]. I never watched TV. I worked.

What was the one thing you and your friends talked about most whenever you got together?

How broke we were. We would try to have fun on the cheap, and probably complained a lot about overdraft fees.

What was the one moment in your career when you knew you’d made it?

When I went to a major singer’s house to cut her hair (we had never met), and she had OUAI in her bathroom. She had no clue it was my brand.

What’s your biggest goal now? How has that changed since when you were 28?

I have the same goals to make women feel good, but on a much bigger scale now. It goes beyond celebrity and I really appreciate the fact I get to connect on such a broad level to so many people daily through Instagram and now YouTube.

More like this
At 28, Rosie Perez Risked Her Career To Stop Playing Stereotypes
By Gabrielle Bondi
At 28, Debra Jo Rupp Was Living A Much Different '70s Show
By Grace Wehniainen
Pamela Anderson's Most Iconic Makeup & Hairstyle Moments
By Olivia Rose Rushing
9 Valentine's Day Hairstyles For 2023 That Look So Dreamy
By Audrey Noble
Get Even More From Bustle — Sign Up For The Newsletter
From hair trends to relationship advice, our daily newsletter has everything you need to sound like a person who’s on TikTok, even if you aren’t.