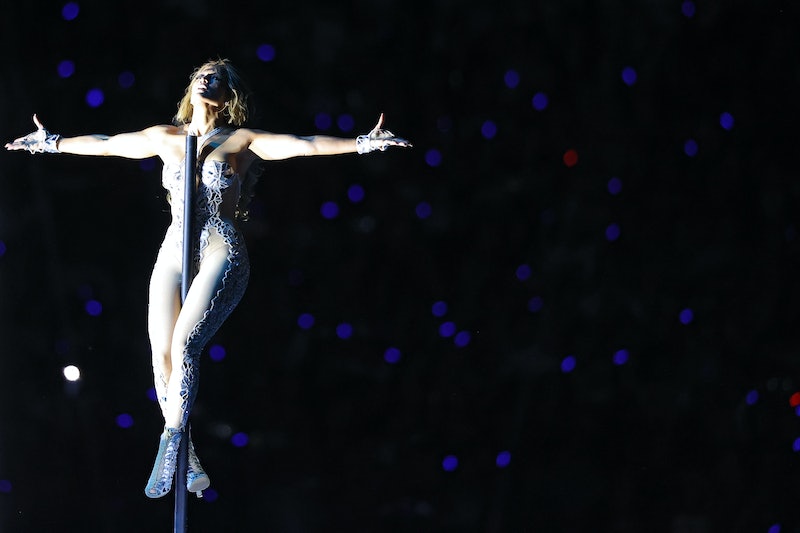 She may have been snubbed at the Oscars, but Jennifer Lopez isn't done showing why she deserves recognition. J.Lo brought her Hustlers moves to the Super Bowl Halftime Show, and it was beautiful. Singing from a top of a pole, Lopez used her pole dancing training to deliver peak entertainment. And, if it happened to double as a message to the Academy showing them what they're missing, well, that's just a coincidence.

Lopez, who shared the Halftime stage with Shakira, started the show standing on a pole, but the real Hustlers dance moves came out later, when she performed "Waiting For Tonight," holding herself up atop a stripper pole. There, she performed some of her signature moves, moves that were showcased in her highly acclaimed performance as Ramona in Hustlers. Wearing a sparkly body suit, the singer nailed the moves, holding herself up in a horizontal line at one point using only her legs and, one assumes, her very strong abdominal muscles.

Not only was it visually stunning, Lopez's Hustlers moves were also interpreted as a response to her recent Oscar snubs. Largely considered one of the most egregious snubs of the season, Lopez was left off the list for Best Supporting Actresses, despite being nominated for a Golden Globe and SAG Award for her performance. But with her Super Bowl Halftime show, she's making it clear that she doesn't need an Oscar to show how hard she worked in the film, sparking Twitter to echo with rallying cries of, to quote Ira Madison, "Justice for Hustlers."

Fans on Twitter are definitely feeling like they got the best end of the deal. The Oscars snubbed J.Lo, but they might have just fueled her to give an epic Halftime performance — and we all got to see it.

Her Hustlers moves weren't the only highlight of the Halftime show. Lopez and Shakira joined forces for an epic finale full of Latinx pride, that included a brief appearance by Lopez's daughter, Emme, who seems to be more than ready to follow in her parents' singing footsteps. The Oscars have never felt so irrelevant.

More like this
Twitter Is Freaking Out Over Rihanna’s 2023 Super Bowl Halftime Show Announcement
By Stephanie Topacio Long
Jason Derulo Is Launching A New Singing Show In The UK
By Maxine Harrison
Everything To Know About Taylor Swift’s 10th Studio Album, 'Midnights'
By Grace Wehniainen and Jake Viswanath
Kanye West Apologizes To Kim K "For Any Stress I Have Caused" In Rare Interview
By Jake Viswanath
Get Even More From Bustle — Sign Up For The Newsletter