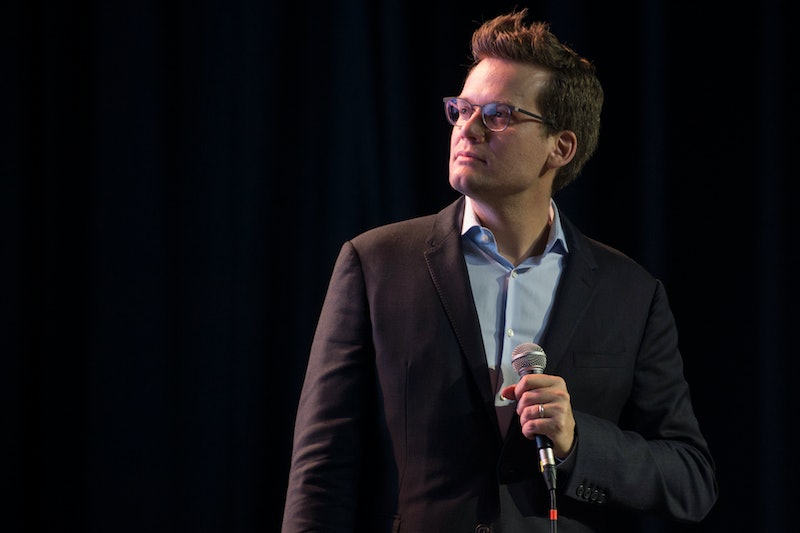 Grab your tissues, YA fans. On Friday morning, John Green tweeted a tribute to Esther Earl, the girl who inspired The Fault in Our Stars, and it's an absolutely stunning way to remember the young woman.

Diagnosed with an advanced form of thyroid cancer at the age of 12, Esther Earl was a Nerdfighter and a member of the Harry Potter Alliance. She was already a fan of Green's books when she met him at LeakyCon in 2009, and the two had spoken online in the Nerdfighter community. After their in-person meeting, however, Earl and Green became good friends. In 2010, "Green . . . posted a YouTube video encouraging people to vote 'with Esther' in a contest. The prize was a $250,000 grant, and the outpouring for Esther garnered so many votes that the award went to the Harry Potter Alliance, a nonprofit founded in Somerville that promotes human rights, literacy, and disaster relief efforts."

Earl died on Aug. 25, 2010, after she was admitted to Children's Hospital in Boston. She was 16 years old. Green, who had celebrated his 33rd birthday the day before Earl's death, released a video called "Rest in Awesome, Esther" on Aug. 27, 2010.

Green tweeted "Happy Esther Day" on Friday, noting that his tribute was intended to fulfill Esther's wish that others would "remember her birthday with a celebration of love among family and friends." The YA author also observed that Friday would have been his late friend's 24th birthday.

Friday's tweet wasn't the first time Green memorialized Earl. In 2014, he wrote: "Esther inspired the story in the sense that my anger after her death pushed me to write constantly. She helped me to imagine teenagers as more empathetic than I’d given them credit for, and her charm and snark inspired the novel, too, but the character of Hazel is very different from Esther, and Hazel’s story is not Esther’s. Esther’s story belonged to her, and fortunately for us she was an extraordinary writer, who in these pages tells that story beautifully."

A 2014 article Earl's sister Evangeline Earl wrote for The Washington Post quoted Green as saying "It’s hard to isolate why [I became friends with Esther], but I’ve never liked a teenager so much — at least not since I was a teenager . . . She was just really cool, in the best sense of the word. She never made me feel uncomfortable. She listened to me and responded thoughtfully, and was also happy to tell me I was full of s---."

Earl's book, This Star Won't Go Out, was published posthumously in 2014.

This Star Won't Go Out by Esther Earl, $9, Amazon