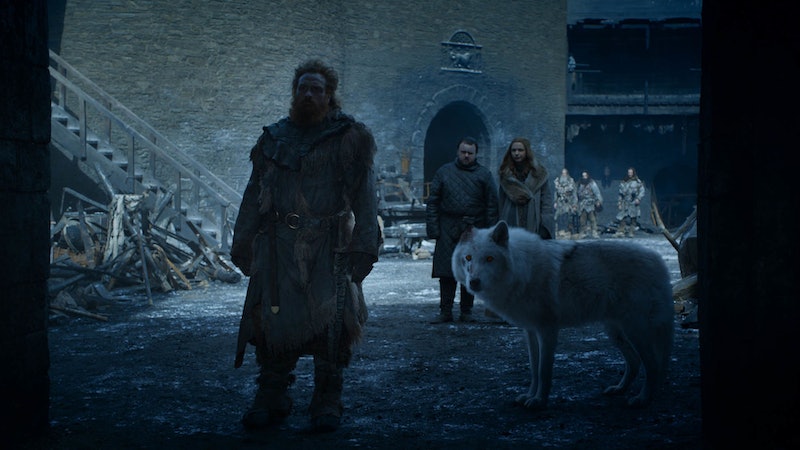 The saddest goodbye on Game of Thrones' final season was unexpected, to say the least. Jon sent Ghost away, and now every one of Ned Stark's children have officially parted ways with their direwolves. Why did Jon give Ghost to Tormund on Game of Thrones? It may have eased the pain of being rejected by Brienne for him, but it's devastating for fans.

Was this a way of Jon letting go of his Stark heritage, and embracing his Targaryen side once and for all? Maybe "embrace" is an awkward choice of words, as Jon apparently isn't breaking up with his Aunt Dany any time soon. Is this foreshadowing that Jon won't return from his trip South? Back in Season One, Jon accepted the albino direwolf pup on Theon Greyjoy's suggestion because he was part of the Stark family — even if he wasn't Ned's true born son. He didn't think that he deserved to have Ghost then, and maybe he feels like that's even more the case now. It's a little sexist of him, to be quite honest. Just because his House Stark heritage is on his mother's side doesn't make him any less of a Stark.

It's probably smart that Jon didn't bring his puppy into the fight against Cersei Lannister. He's done enough, and is severely injured. Sansa is right, they all need to recuperate, even direwolf warriors. However, Ghost didn't even get a proper goodbye from Jon, which is so rude!

This is pretty much the end of the direwolves in Westeros, depressingly enough. Summer, Lady, Grey Wind, and Shaggydog are all dead. Nymeria is leading a girl gang elsewhere, and didn't follow Arya to Winterfell. Now Ghost is headed up North. They're not totally extinct, but if feels like the end of an era.

The episode was called "The Last of the Starks," something Arya says in the episode — but could be referring to these wolves as well. The direwolf is the sigil of House Stark, and when the cubs showed up in the Game of Thrones pilot it was considered to be some kind of sign. Now, at the end of the series, the last of the Starks' loyal direwolves has been sent away. Feels like a sign.

There's also no reason he couldn't have just stayed at Winterfell with his sister. Sansa, by the way, was parted with her direwolf in a rather unfair way. Lady was killed by Ned for crimes committed by Arya's direwolf Nymeria. If anyone deserved to have a pet again, it's her.

So now, presumably, Ghost is going to live with Tormund. As the Wildings were Jon Snow's adoptive family (well, captors) for a time, it's a fitting place for him. Still, it was all around inconsiderate of Jon to basically send his pet off to live on a farm without so much as a pat or a hug goodbye. Ghost has been with Jon from the very beginning. Hopefully he'll have a happy life with Tormund, because he's a very good boy and deserves it.