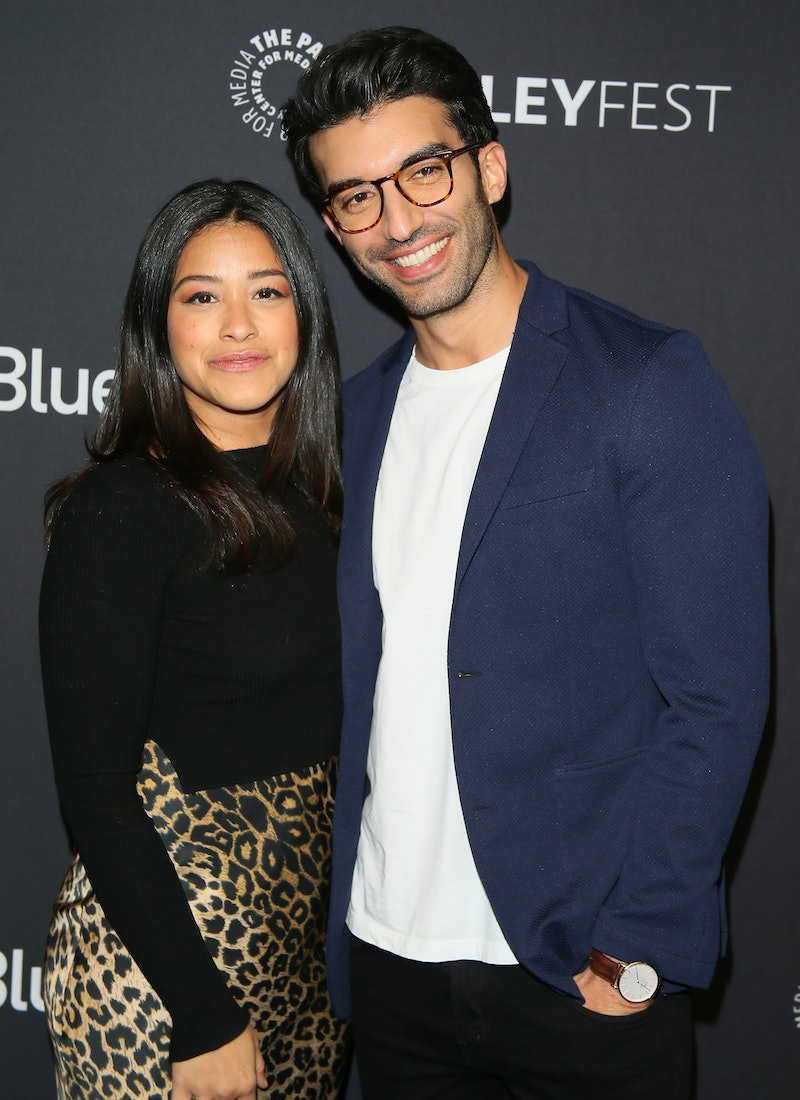 These two have an on-and-off again relationship on-screen, but off-camera, these pals are always there for each other. Justin Baldoni officiated Gina Rodriguez's wedding, and his role in the ceremony will make Jane the Virgin fans so happy. On Monday, Rodriguez announced her marriage to Joe LoCicero, whom she wed in a secret ceremony over the weekend. The star posted a brief video of the celebration on Instagram, which included clips of Baldoni acting as officiant for the special day.

As fans know, Baldoni plays Rafael on Jane the Virgin with whom Jane, played by Rodriguez, accidentally has a baby. In the series, Rafael and Jane are involved in a love triangle, and it's still unclear if the two characters will end up together at the end of the show. But given how long Baldoni and Rodriguez have been scene partners, it makes sense the actors have become close in real life.

On Instagram, Rodriguez included a special thank you message for Baldoni in the wedding video's caption:

"'With that one kiss we got 100 new family members' my 9 year old niece, Mia. Thank you to my mother in law for the wedding of my dreams. And the village that helped her! Special thank you to our soul brother @justinbaldoni and my new brother for singing me down the aisle Michael LoCicero @mikelosaurusrex."

Jane the Virgin premiered in 2014, meaning Rodriguez and Baldoni have been working on the series together for five years. In May 2018, the CW revealed the fifth season would be the show's last, according to the New York Times.

In September 2018, Rodriguez posted a selfie with Baldoni on Instagram, after filming the premiere of the final season. She wrote, "One down. Seventeen to go. Janes journey will never end with these beautiful friendships this show has given us. #DirectorJane #seasonpremiere."

Baldoni also posted an emotional selfie on Instagram after the final table read, sharing how meaningful the friendships formed on the show were. He wrote,

"Five years of cast table reads every week. This was the last one. Ends are always hard. We’ve grown up together. Been through massive life moments together. Through joy and pain. These are real friendships. Not 'show friendships'. It’s the end of an era but the beginning of so many incredible things."

Leaving Jane the Virgin behind is clearly emotional for the tight-knit cast. On April 24, Rodriguez shared a heartfelt message for fans about the end of the series on Instagram. The star posted a behind-the-scenes picture with a bottle of champagne, writing:

"And that’s a wrap on Jane. 100 episodes. Sending so much love to all the Jane Warriors who made our show thrive for all these years! We love you."

The cast may be putting the popular series behind them, but Rodriguez and Baldoni surely have big plans for the future. They've also had a few recent career highlights: In April, Rodriguez appeared in Someone Great, a romantic comedy on Netflix. Meanwhile, Baldoni also made his directorial debut with Five Feet Apart in March.

The fact that Baldoni was there for Rodriguez on her wedding day shows the friendship they forged on Jane the Virgin will last long after the series is over. And fans can definitely take comfort in that.