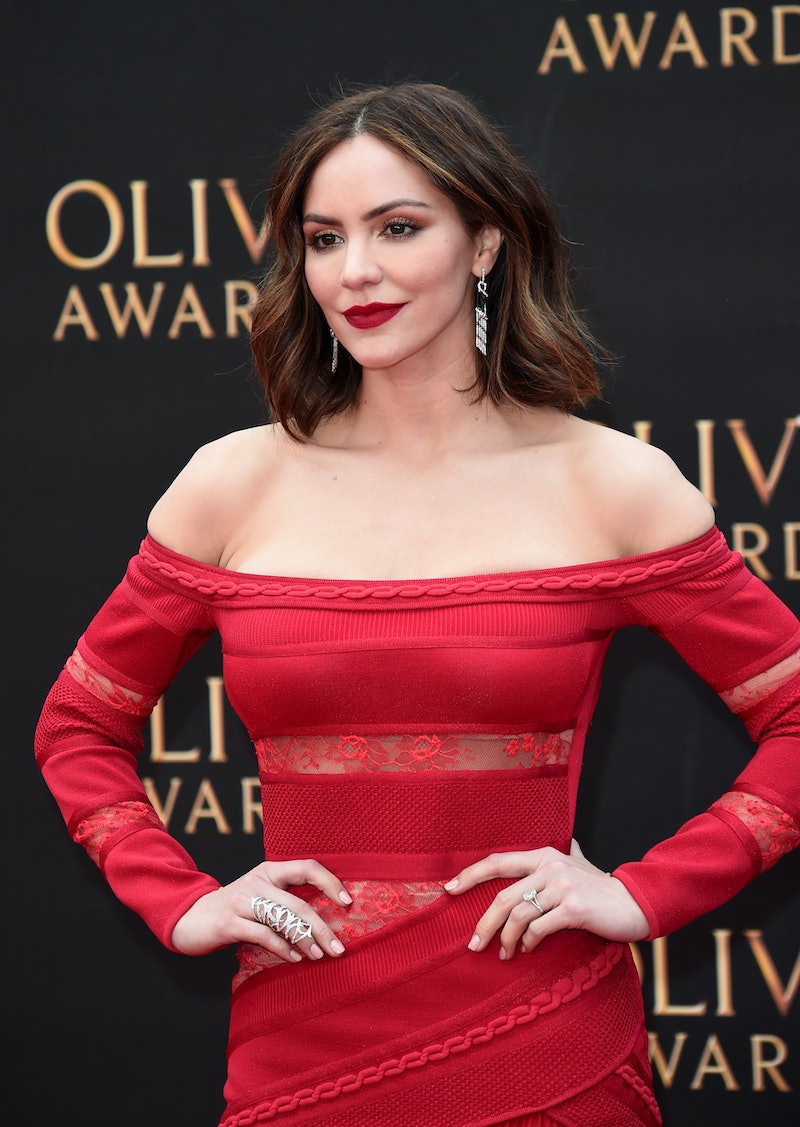 This musical star had a special post-performance celebration. On Saturday, May 4, Katharine McPhee's Waitress costars threw her a surprise bachelorette party, and the festivities looked like so much fun. McPhee is currently starring as Jenna in the West End run of Waitress, which premiered at the London Adelphi Theatre in the U.K. back in February. Given her busy show schedule, it looks like the star had to fit one of the bridal celebrations in after a performance. Her friends and costars took a break from the show to plan the star an impromptu bachelorette party, complete with balloons, dancing, and plenty of drinks.

The Waitress star shared plenty of snaps from the evening of partying on social media. McPhee shared a mirror selfie on Instagram, posing with a veil that said "bride" and showing off her engagement ring. The post was captioned, "The future is happy and bright #katchelorette" with a star and heart face emoji. Friends and fans commented on the post to wish the star a happy evening of celebrating. RuPaul's Drag Race judge Michelle Visage commented, "Beauty." Michael Orland, who was McPhee's vocal coach, wrote, "Gorgeous" with a heart emoji. Many fans also shared well-wishes on the post, writing how happy for the star they were.

The singer also posted plenty of updates throughout the evening on her Instagram Story. In one picture, McPhee posed in front of a wall of balloons reading, "Bride To Be." In the picture, she can be seen sipping from a red cup and wearing the "bride" veil. She captioned the photo, "casually walked off stage to this #katchelorette" with a picture of an engagement ring.

Giving fans an up close look at the veil and her funny shot glass necklace, McPhee posted another selfie on her Instagram story. She wrote, "Oh my!!" over the photo.

Olivia Moore, who is McPhee's Waitress costar, shared a picture of the singer taking a celebratory shot on her Instagram Story. In the photo, the star can be seen wearing a "Bride to Be" sash, and the caption reads, "Tonight is the night @katharinemcphee." McPhee reposted the picture to her own Story, writing, "A surprise bachelorette party!!!!!"

The party did not stop there: McPhee went on to share several videos of herself singing and dancing with friends out at a bar. At the end of the evening, she shared one last picture along with a special message for her pals who planned the event. She wrote, "Ok goodnight. My ladies @ashgaffs @suzanneevel planned this whole surprise. But honestly thank you to my whole cast and Crew. You guys made me such a happy lady."

McPhee has had a significant couple of year's in her personal and private life. In addition to starring in the popular musical, McPhee confirmed her engagement to producer David Foster in July of 2018. The singer revealed details about the proposal in an Instagram post, sharing text messages she exchanged with Just Jared founder Jared Eng. McPhee wrote:

"He did it at the top of this mountain in Anacapri. Totally dark only stars. Thankfully he didn't push me off a cliff. He said it was one or the other. And in the end he spared me."

It's clear this Waitress star is so excited to be married, and her friends helped her celebrate in the best way possible. The cast and crew's evening out looked like so much fun, and even though the star is busy with performances, her friends found the perfect surprise way to fit the celebration into her busy schedule.