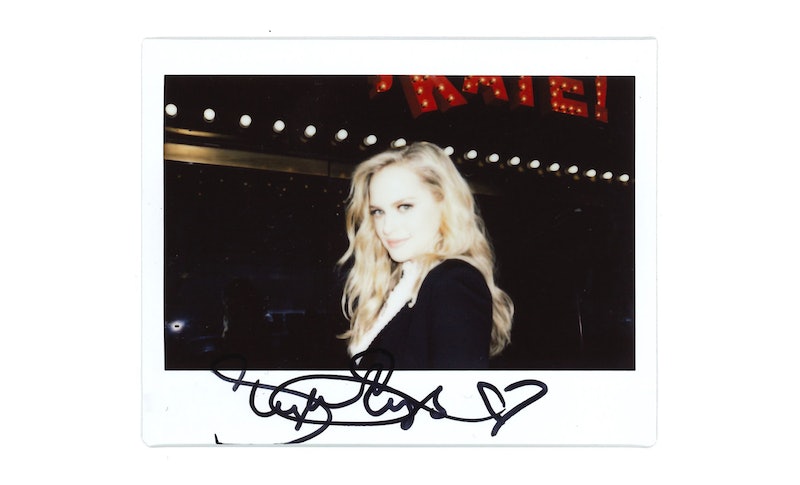 When celebrities hang out with Bustle writers, we want to give them the chance to leave their mark. Literally. So we hand them a pen, a piece of paper, a few questions, and ask them to get creative. The rest is up to them. This time, Kiss Me Kate star Stephanie Styles is leaving her mark in the Bustle Booth.

Between Bonding, Booksmart, and a breakout Broadway debut, you're about to see Stephanie Styles everywhere. Currently in Kiss Me Kate, Styles stars opposite Corbin Bleu as Lois Lane — no, not that Lois Lane — a lounge singer cast as "Bianca" in Taming of the Shrew.

Cole Porter's 1948 musical updated Shakespeare's battle of the sexes with jazzy sex-positive tunes like "Too Darn Hot," and the revival at Broadway's Studio 54 theater takes it one step further. Lyricist Amanda Green contributed new material that smooths over some problematic elements of the original show and brings it into the 21st century.

"It's really become 2019's Kiss Me Kate," says Styles, the "perfect amalgamation" of what audiences remember about the classic and how we view the world today. For Styles, most of the changes don't apply to her character, Lois. "She's very much, in the original script, an equal to Bill, her counterpart."

Her big number in the show, "Always True To You In My Fashion," is and always has been modern... in its fashion, that is. It's definitely the role composer Cole Porter would have wanted to play himself, Styles says. Lois has a lot of sugar daddies, but she and Bill, her love interest in Kiss Me Kate, are basically in an open relationship. "I think it's great to find a character that is so sexually empowered yet has really defined career goals," says Styles, "but is also just so incredibly hopeful and still committed to her man."

If that wasn't enough, Styles can also be seen in the upcoming film Booksmart, directed by Olivia Wilde, starring Beanie Feldstein and Kaitlyn Dever. "They are the heroes of this generation," Styles says of Wilde, Feldstein, and Dever. "Their work is unbelievable and I think they are rock stars. All of them together."

Meanwhile, the triple threat is dangling off ladders and belting up a storm at Studio 54 in Kiss Me Kate. She's a connoisseur of Broadway and musical theater, name-dropping the infamous Kander and Ebb flop The Rink alongside Hamilton and Book of Mormon in conversation.

Get to know more about Styles at the start of her industry takeover, below! (Hint: the "favorite emojis" are clues about Bonding.)

More like this
On 'The Handmaid’s Tale,' Christine Ko Fights Back
By Gretchen Smail
Ismael Cruz Córdova Loves His Elf Ears
By Morgan Leigh Davies
Twitter Is Freaking Out Over Rihanna’s 2023 Super Bowl Halftime Show Announcement
By Stephanie Topacio Long
Everything To Know About Taylor Swift’s 10th Studio Album, 'Midnights'
By Grace Wehniainen and Jake Viswanath
Get Even More From Bustle — Sign Up For The Newsletter