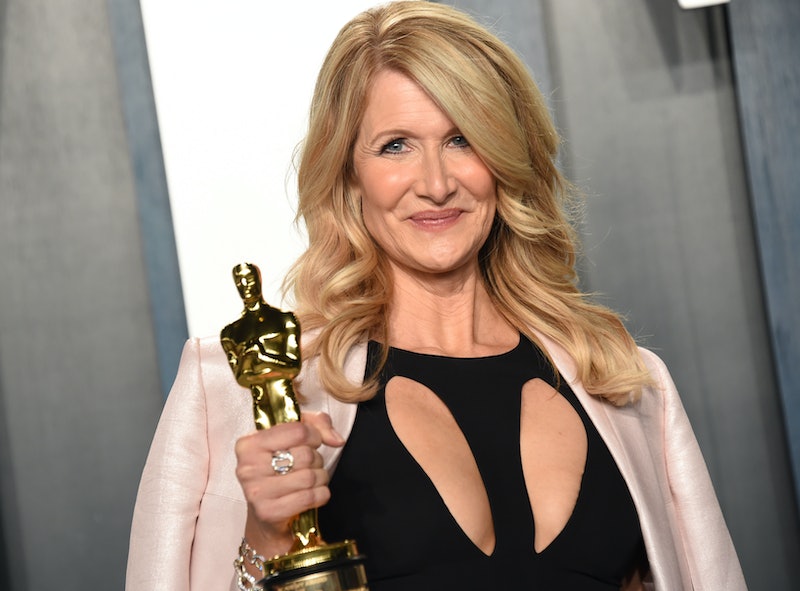 After winning her first Oscar for her role in Marriage Story, Laura Dern called out the lack of female directors nominated by the Academy. In addition to Marriage Story, the Best Supporting Actress winner also starred in Little Women, and she firmly believes that the film's director, Greta Gerwig, should have taken home a trophy of her own. In fact, he actor is so passionate about her belief that she wished she could give her Oscar to Gerwig in her post-Oscar win interview.

Backstage at the Academy Awards, Entertainment Tonight reported that Dern told reporters, "If I could give this Oscar to Greta Gerwig, I would do it right now." Gerwig was one of a number of female directors snubbed by the Academy this year. Other notable women who didn't receive a nomination included Lulu Wang (The Farewell), Olivia Wilde (Booksmart), Kasi Lemmons (Harriet), and Alma Har'el (Honey Boy).

In a year when so many deserving female directors were passed over for a Best Director nod, Dern was passionate about making sure they weren't forgotten in the excitement of Oscar night. After mentioning Wang and Har'el, the Little Women star said, "There are great films and I think that our lens should focus perhaps on the lack of accolades, and the less opportunity there is and even more so the lack of second chances given to female voices."

Since the Oscars began, only five women have been nominated for Best Director, and only one woman, Kathryn Bigelow, has taken home the award. In a year when all of the Best Director nominees were once again men, Dern wasn't the only person who called out the continued snubbing of female directors.

Oscar winner Natalie Portman used her red carpet look to continue the conversation about Hollywood's lack of recognition for female voices. Portman walked the red carpet wearing a Dior cape embroidered with the names of eight female directors of critically-acclaimed 2019 films that weren't nominated, per Vox. "I wanted to recognize the women who were not recognized for their incredible work this year in a subtle way," the Thor: Love and Thunder actor told Los Angeles Times reporter Amy Kaufman. In addition to Gerwig, Wang, and Har'el, Portman's cape also included the names of Lorene Scafaria (Hustlers), Mati Diop (Atlantics), Marielle Heller (A Beautiful Day in the Neighborhood), Melina Matsoukas (Queen & Slim), and Céline Sciamma (Portrait of a Lady on Fire).

During a night when the lack of accolades for female filmmakers was glaring, it was heartening to see stars like Dern and Portman continue to advocate for women behind the scenes. And although she couldn't give her Oscar to Gerwig, Dern ultimately did share it with her Little Women director, as well as Noah Baumbach, the director of Marriage Story. "I spent my year within art, in friendship and doing press for both films [with them]. So I would love to also see her continually awarded for all her beautiful work," she said.

More like this
14 Women To Watch This Oscar Season
By Marina Watts
Lin-Manuel Miranda & Tituss Burgess React To 'Little Mermaid' Casting Backlash
By Radhika Menon
An Extremely Messy Ranking Of What Actually Happens In 'Don't Worry Darling'
By Chloe Foussianes
Paul Mescal, Man Of Mystery
By Samantha Leach and Heather Hazzan
Get Even More From Bustle — Sign Up For The Newsletter