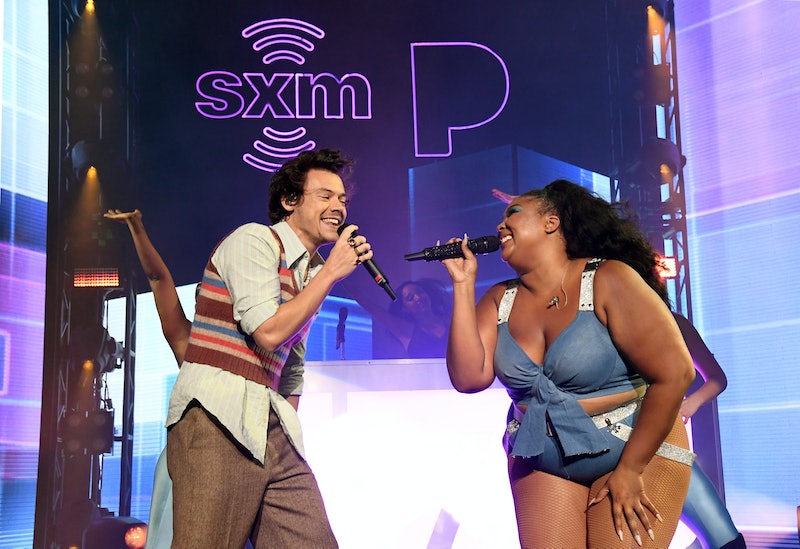 Lizzo has been on top of the music world for a while now, and after her latest stunt, it doesn't look like she'll be fading into the background any time soon. Lizzo covered a Harry Styles song during a recent performance on BBC Radio 1's Live Lounge in London, returning the favor from when Styles covered one of her songs on the same program back in December. The two stars clearly share an affinity for each other, which should have fans salivating over the possibility of a future project between them.

The musical love affair between the former One Direction member and the "Good As Hell" singer kicked off in earnest on Dec. 18, when Styles paid a visit to Live Lounge to perform. He shocked listeners by passionately covering Lizzo's hit "Juice," and then gushed about the singer afterwards. "I just think she's amazing, she's one of the most exciting artists working now for sure," Styles said on the program, according to Insider. "She's exactly what you want an artist to be, which is themselves." Lizzo took note of Styles' performance, sharing a video of it on social media and calling it "so cute." She also stated that Styles' comments about her made her "melt," and hinted at a future collaboration, tagging Styles on Twitter and writing "You know what this means right....?"

The next stop on the Lizzo n' Harry love train occurred on Jan. 30, when Styles made a surprise appearance on stage at Lizzo's concert in Miami. Before going into "Juice," Lizzo called Styles onto the stage, where he sang the first verse of the song before busting a move alongside Lizzo's backup dancers. The clearly rehearsed performance even featured some personalized and flirty new lyrics between the pair, taking their mutual admiration for each other to another level.

Now, the third chapter in the Lizzo and Harry Styles story has been written, and for the first time it's one of Styles' songs that has been performed. On the Feb. 17 edition of Live Lounge, Lizzo performed Styles' new hit "Adore You," which was just released in December, and added her own special twist to it in the form of a flute solo. But covering Styles wasn't enough. Lizzo also discussed her adoration for his work following her performance, singling out his latest album Fine Line as a highlight. "It’s been so fun, because I’ve been listening to the whole album," Lizzo said, according to the UK's Evening Express. "Fine Line is my jam, so I already sing the songs and now I get to do it with my band, my way."

What's next for these two superstars is anyone's guess. Could Lizzo and Harry Styles record a song together? Or maybe an entire album? How about a world tour?! At this point, nothing seems out of the question as there is clearly a lot of love and respect between the two singers. Pretty much the only thing of which fans can be certain is that we haven't heard the last of the sonic love affair between Lizzo and Harry Styles.

More like this
Lizzo Twerks While Playing James Madison's 200-Year-Old Crystal Flute Onstage
By Radhika Menon
Everything To Know About Taylor Swift’s 10th Studio Album, 'Midnights'
By Grace Wehniainen and Jake Viswanath
Snoop Dogg & Michelle Pfeiffer Lead Moving Tributes To Coolio
By El Hunt
Stormzy Made A Passionate Speech About The Importance Of Diversity
By El Hunt
Get Even More From Bustle — Sign Up For The Newsletter