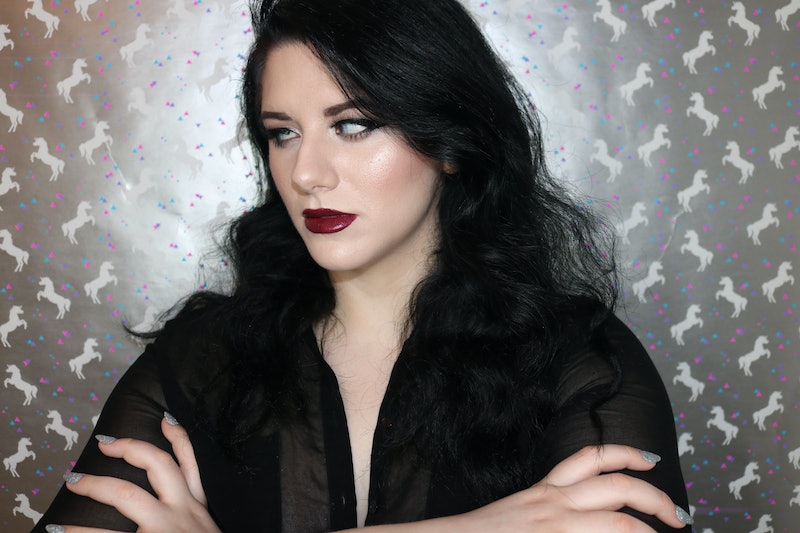 Have you ever been criticized for not smiling, or told in earnest that you'd "look nicer if you smiled more?" Do you walk down the street minding your own damn business, only to encounter strangers who have something to say about your face? If this sounds like you, then you might have what is commonly known as Resting Bitch Face, or RBF. Personally, I think RBF is amazing — and I have one, myself. In fact, I use makeup to enhance it.

I've been harassed on behalf of my intense RBF since birth. For years, close friends have confessed that they thought I was a huge diva when they first met me simply because of my genetically bestowed facial features. If I had a dollar for every time I've been told to “smile” by a stranger on the subway or street, I'd probably have enough money to exclusively take taxis and avoid those comments altogether — then again, a taxi driver would probably say the same thing, eventually.

When men refuse to smile, they're often perceived as serious, busy, or intellectual. But women? We're "nasty," "cold," or straight up threatening (all things I have personally heard).

Naturally, when people comment on my appearance in any way, shape, or form, my instinct is to double down on it. As a result, I've created my perfect makeup tutorial to enhance and celebrate my RBF. Here it is in it's natural state:

And here's how I take my natural RBF to another level.

I started by priming my face with a silicone-based primer. This gives me that glossy, poreless mannequin-like look that often inspires others *coughmencough* to comment. Case in point, an actual Tinder message I received once:

I used the Urban Decay Optical Illusion Primer for this step. Using a pea-sized amount, I applied from the center of the face outward. If you want to skip primer, live your life, girl. It's not like we'll have foundation settling in smile lines today anyways.

Next, I used my Beauty Blender to pound in a layer of Bobbi Brown's Skin Foundation. This creates a sheer base that truly allows my skin to breathe. After all, haven't we been suffocated enough?

Then I took my Hourglass Vanish™ Seamless Finish Foundation Stick to vanish any inkling of me giving a fuck about how many men have told me that I'm "pretty with makeup, but probably much prettier without it." I applied it to my chin, the center of my nose, and my forehead to highlight how naturally badass I am. I also tapped some under my eyes to conceal all the sleep I don't loose from caring about others' opinions of me.

Of course, I wantedd to enhance my natural angularity (think Angelina Jolie as Maleficent) so I use the cream from my Tarte Tarteist™ PRO Glow Highlight & Contour Palette to carve into my cheekbones, temples, and jawline.

Finally, I pressed on some Laura Mercier Translucent Setting Powder to my hot spots, which is like, everywhere, let's be real.

I added a little flush to the apples of my cheeks and a thick layer of highlight to the high points of my bone structure where I don't get oily or sweaty. Burberry's Fresh Glow Highlighter in Nude Gold really does the trick. I wanted my glow to be so reflective that strangers can see themselves as they comment on my appearance.

Eyes are the windows to the soul after all — and after a day spent fielding comments about how I look, my soul feels pretty dead. I began by reinforcing my brows with some Anastasia Beverly Hills Brow Definer in Dark Brown. I made sure to arch them even higher than the dreams I'll surely achieve and sharper than the wit and intelligence I'll use to get there.

Now that I'd created the perfect frame for my masterpiece, I primed my lids with Urban Decay's Original Primer Potion so my eyeshadow will stay on through all the tears I won't shed for those offended by my RBF.

To intensify my already steely stare, I opted for a smoldering smoky eye. I began by applying a shimmering silver shadow to the center of my lid before blending matte, grey tones into my outer corners. I really focused on deepening the outer V, which created a cat eye shape that narrowed my eyes to express my disdain without the risk of having to squint. I find Natasha Denona's Blue Purple Eyeshadow Palette 28 works best for this.

Of course, any RBF look cannot be completed without a wing so sharp it could, well, ya know...

To create the cleanest line ever, I called on my Marc Jacobs Highliner and Kat von D Tattoo Liner as my weapons of choice. The bigger the wing, the better the slay those jealous biddies with.

I used my pencil liner to do some dashes between my lashes. Then, I used my liquid to cut the wing to perfection.

Of course I couldn't forget to add some generous coats of mascara and some false lashes because I won't have to bat a single one when someone tries to tell me to smile.

Of course, I wanted to emphasize the fact that I don't have to smile when there is no actual motivation or reason to do so, so I opted for a bold, dark lip color that makes my pout really pop.

My favorite "IDGAF" color is Obsessive Compulsive Cosmetic's Black Metal Dahlia, which is the perfect mix of "You're vampy as hell," and "Thanks, I already know." I even lined my lips for extra displeased definition before filling in with the metallic lip tar.

So embrace your RBF girl. There's power in your emotion and your choice to express it. Never feel like you have to smile to make someone else more comfortable with their existence. Just keep doing you and live your best life bb.

More like this
The 13 Best Cream Makeup Palettes, According To Experts
By Audrey Noble
Pamela Anderson's Most Iconic Makeup & Hairstyle Moments
By Olivia Rose Rushing
23 Romantic Makeup Ideas For Valentine's Day 2023
By Olivia Rose Rushing
This Week’s New Makeup Releases & More Beauty Headlines
By Audrey Noble and Erin Stovall
Get Even More From Bustle — Sign Up For The Newsletter
From hair trends to relationship advice, our daily newsletter has everything you need to sound like a person who’s on TikTok, even if you aren’t.