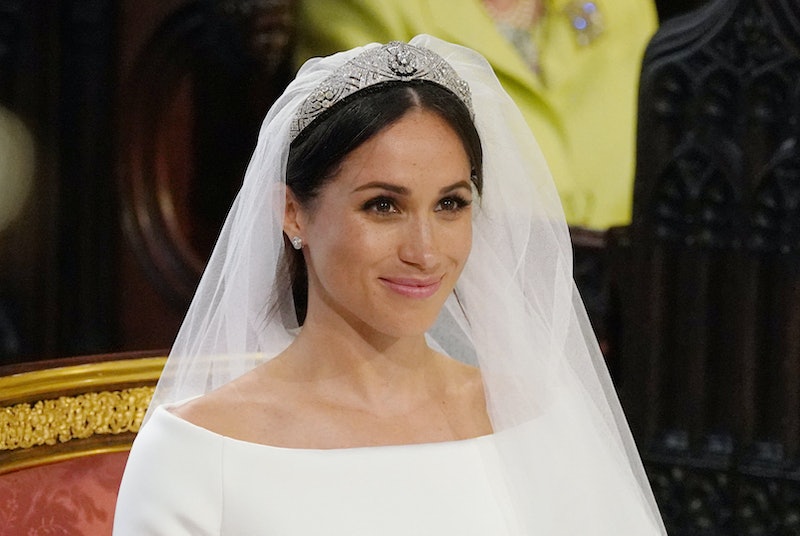 Ever since she became royalty-to-be — and even before that, thanks to her role on Suits — we've all wanted to know more about Meghan Markle's makeup routine, and how she creates that dewy, natural look. From her eyebrows, to her princess-y glow, she clearly knows what's up when it comes to beauty. So really, it was no surprise that Markle's wedding makeup was enviable, too.

That certain something we've all grown to know and love — which has been aptly named the "Markle Sparkle" — was on full display as she and Prince Harry were married at Windsor Castle. Obviously, Markle's glow likely stemmed from her excitement about her big day. But her makeup likely had a part to play as well.

Her look was so natural and effortless, yet still polished enough for her big day. It didn't look like she was wearing very much makeup. But what she did apply certainly did its job, and helped her glow on camera for the whole world to see.

The look was simple, yet radiant, whether she was in the back of a car, sitting in the church, or riding away in a horse-drawn carriage.

And, despite the fact it was her wedding day, the look was still something any of us could wear, any day of the week.

We've been aware of Markle's makeup skills for a while now, thanks to old celebrity interviews, and the posts she made on her now defunct lifestyle blog The Tig. So it's common knowledge that Markle doesn't go over the top when it comes to beauty.

According to past interviews, like one she did in 2016 with Beauty Banter, Markle uses products like Laura Mercier's Illuminating Moisturizer and NARS blush in Orgasm, to help her get that well-known glow.

She also admitted her love for Fresh Sugar Lip Treatment, as well as the Skin Firming Hydration Lotion from Nivea; two very affordable products we could all pick up right now. You know, just to be a little bit more like the new princess.

I mean, who wouldn't want to steal this look? If a glow this effortless can be achieved with just a few, affordable brands, why not give it a try?

Of course, the jury is still out regarding the exact products Markle used for her big day. But my guess is, it wasn't anything too fancy.

Markle's wedding day makeup was simple yet gorgeous — as seems to be tradition now as far as royal weddings go. Back in 2011, Catherine, Duchess of Cambridge arrived at her own wedding in a beautifully natural look she did entirely herself, according to the Daily Mail.

Apparently, it was just Kate alone with a mirror and a stick of eyeliner — no fancy makeup artist necessary. As noted in Vogue, Middleton "was rumored to have had a series of private lessons prior to the wedding from London-based make-up artist Arabella Preston. However, on the day, she was the one holding the brushes; choosing to create a softly smoky eye, enhancing the apples of her cheeks with a pink blush color teamed with a matching lipstick shade." And she did an excellent job.

It was rumored in the months leading up to the royal wedding that Markle might go the same route, and do her own makeup, too. As reported by Express.co.uk, Markle refused to have a makeup artist, and instead flew her friends in to lend a helping hand. An insider told the site, "She’s got two friends doing it for her from America. They’re not professionals — just close friends of hers ... They are coming to stay at Windsor Castle ahead of the wedding, where they will be put up in the staff accommodation.”

While you might think she would have opted for a professional, seeing as the whole world was watching and scrutinizing her every move, can you really blame Markle for choosing her friends instead? It's so easy to go overboard with wedding makeup, in an effort to stand out and look "bridal."

Whatever happened behind the scenes, there's no denying the look was effortless and glowing — just like Markle herself.

The finished look was certainly fresh, clean, and natural. She wore eyeliner, shimmering blush, and the palest of pink lipsticks. And looked every bit the royal bride.