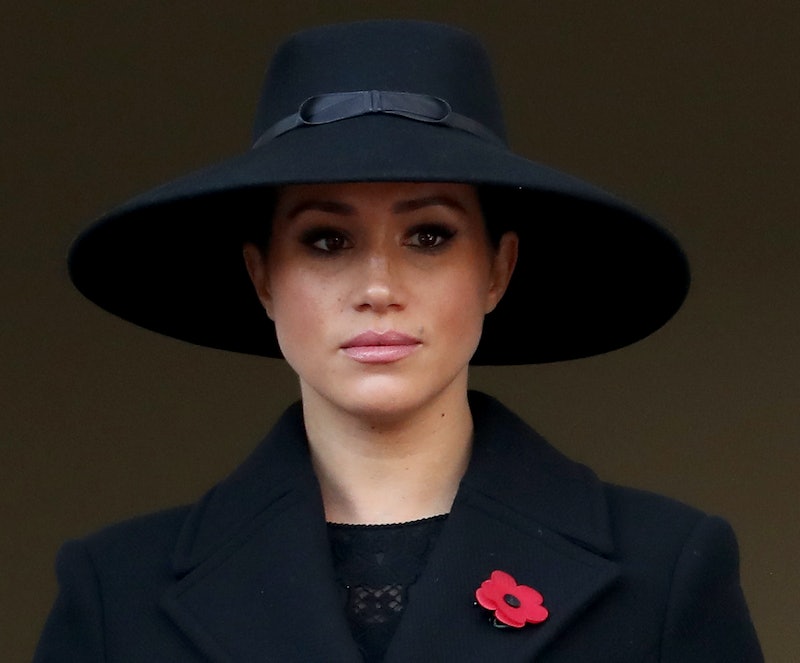 Meghan Markle has a multitude of designers and brands she wears often. From affordable pieces like her J.Crew cardigan to more high-end items like bespoke Dior, the Duchess of Sussex knows what she likes and wears it. Meghan Markle's Remembrance Day coat was yet another designer repeat. However, the piece may just be a bit more special given that it's from the designer responsible for her wedding reception gown.

According to Women's Wear Daily, Markle, alongside sister-in-law Kate Middleton as well as the Queen, attended a ceremony to honor fallen solider from World War I, World War II, and other subsequent combats. The event was somber with the Duchess of Sussex donning an all black ensemble accented only with the traditional red Remembrance Poppy. While the occasion was solemn, Markle stepped out wearing a piece that fans of her style may consider a bit nostalgic.

The Duchess chose a black Stella McCartney coat that featured a silver, D-shaped buckle at her natural waist. Alongside the coat, she wore a wool, wide-brimmed hat from Stephen Jones, black leather gloves, and what appears to be a lace detail dress beneath the coat.

Of course, the occasion was not one where Markle would go bold, but the inclusion of a Stella McCartney design is special given that McCartney designed the Duchess's now famous wedding reception dress.

Markle's Remembrance Day coat is not, however, the first time she's revisited McCartney since her marriage. During a royal trip to Australia in Oct. 2018, Markle rewore the same Stella McCartney cape dress she'd donned for the Queen's birthday earlier that year. During the same trip, she wore a creation from the designer crafted specifically for her, and this summer, at the opening of Major League Baseball's London Series, she chose yet another black ensemble from McCartney.

Clearly, Markle's McCartney collection is quite impressive, and the label ranks among some of her favorites.

Her outfit repeats with McCartney have been notable, but her wedding reception dress is certainly the most memorable moment when the Duchess wore the designer. The white, halter-style gown with an open back and minimalist design has gone on to become a popular recreation for weddings. In fact, McCartney's label sells a similar style that's available at Nordstrom.

Plus, the dress appears to have been such a hit that celebrities are using it as inspiration for their own wedding looks. In September, Hailey Baldwin (now Bieber) wore a look-a-like frock to her own wedding reception in South Carolina.

Yes, Markle's Stella McCartney coat from Remembrance Day is a more reserved look, but the Duchess's decision to wear the label certainly brings back memories of that romantic day in May 2018.