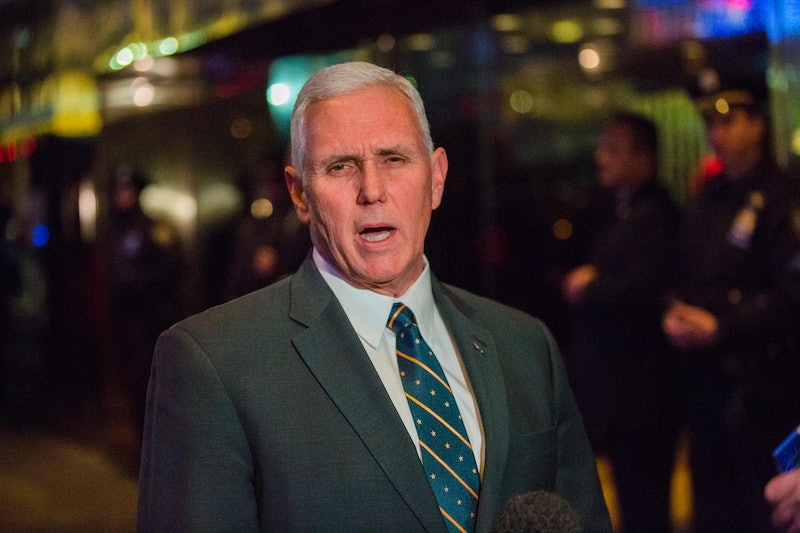 Prior to Donald Trump's election win, there was significant talk about how his running mate, Mike Pence, was more of a one-man clean-up crew than anything else. Throughout the general election, the responsibility of reframing and clarifying Trump's inflammatory remarks repeatedly fell to Pence, and so it is once again. With Trump's attack of civil rights icon John Lewis sparking bipartisan outrage less than a week before the president-elect is set to be sworn into office, Pence has been forced to once again smooth things over. However, Pence's defense of Trump's attack on Lewis seems especially strange given the vice-president elect's previous praise of the civil rights activist.

In a series of tweets published Saturday, Trump claimed Lewis, a congressman and former civil rights leader, was "all talk, talk, talk - no action or results." He described Lewis' district as "crime infested" and "in horrible shape and falling apart." Many of Lewis' constituents have since challenged Trump on his claim.

While defending Trump's decision to lash out at Lewis on Twitter in an interview on Fox News Sunday, Pence appeared to imply he thought Trump would do more for black people than Lewis, a prominent civil rights leader, had.

"I think Donald Trump has the right to defend himself," Pence said when asked if he felt Trump's claim that Lewis was all talk and no action was an appropriate characterization of a man who was beaten by police on "Bloody Sunday" when participating in the 1965 Selma March. "What Donald Trump was talking about there was literally generations of failed policies coming out of Washington, D.C. that have failed too many families and too many cities across the country."

Trump's attack of Lewis came hours after the congressman announced he would not attend the inauguration due to his doubts over the legitimacy of Trump's election win in the wake of reports regarding Russian election hacks from U.S. intelligence agencies.

But Pence hasn't always appeared so dismissive of Lewis' contributions. In fact, in an October 2016 blog post about his participation in the 10th Congressional Civil Rights Pilgrimage for the GOP's official website, Pence expressed nothing but praise and admiration for Lewis. In recalling his time in Selma, Alabama, the vice president-elect notes Lewis is a "legendary civil rights leader" who's "courage and moral authority continue to inspire millions." Pence also writes about his gratitude for what "John Lewis and others had done for America that day:"

Every American should know the story of Montgomery and Selma. Thanks to courageous Americans like Dr. Martin Luther King, Jr., Congressman John Lewis, Dorothy Cotton and F.D. Reese, these cities have become an integral part of the American story in our nation's unrelenting march toward a more perfect union."

While Trump certainly has the right to defend himself (the question isn't can he, but should he), it seems odd that Pence would expect a civil rights icon like Lewis to simply fall in line given both the way Trump vowed to question Democratic nominee Hillary Clinton's legitimacy if she won and the way he spoke about black communities during his presidential campaign. Trump's lashing out at Lewis was only the most recent example of his pattern of delegitimizing his critics.