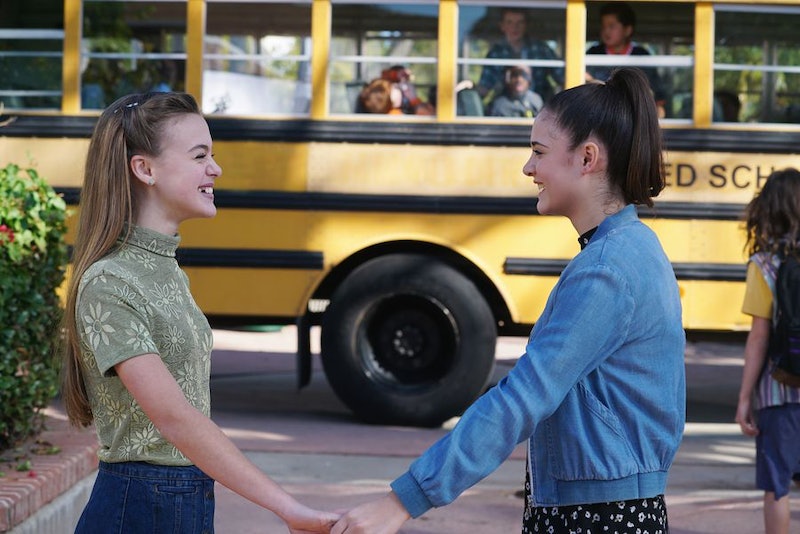 As the adorable tykes on Fresh Off The Boat aged up into adorable preteens and teens, it was pretty easy to see that the show was ripe for seminal moments — boyfriends, girlfriends, first cars, first heartaches, etc. The Season 4 premiere of Fresh Off The Boat didn’t play around when it came to teenage confessions — Nichole came out as gay on Fresh Off The Boat, and it was really no big deal. Now, of course it was difficult for Nichole to muster up the courage to come out to Eddie, but her admission was very nonchalant, which is exactly the way it should be. NBD.

In the episode, the Huang family is temporarily homeless — they moved at the end of Season 3 to get Evan into a fancy private school) — and they want their old house back. So, the family is staying with Honey and Marv to give the kids some place to go and Jessica ample time to shame the current tenant into letting them have their house back. Nichole and Eddie have been friends throughout the series, and Nichole has had Eddie’s back in a few choice moments (remember when she saved him and his friends on Halloween?). Nichole, now with a license and the freedom to drive anywhere (she gets a Saturn, one with those automatic seat belts I know you remember from the 1990s), invites Eddie to a local Mexican restaurant for chips, salsa, and chatting.

This, of course, to Eddie means that Nichole is trying to hit on him, and Eddie has a girlfriend! He’s not trying to cheat on her, even though she’s gone all summer long. So, Eddie takes Nichole up on her offer to get lunch, but he tells her that he has a girlfriend, and he’s not into her like that. But that’s not what Nichole wants to say — it’s a simple “I think I like girls.” Eddie, with an initially disappointing response, is silent the whole car ride home and then just... gets out of the car. The look on Nichole’s face is heartbreaking. The first person she tells she’s gay bails on her? But then Eddie gets back in the car, and says he's totally up for talking to her about it. The relief on her face is palpable.

For a moment there, it really seemed like Eddie was going to blow it, but I guess he was just trying to let Nichole’s confession land. Nichole hasn’t told anyone else about how she's questioning her sexuality, but she should know now that Eddie will have her back no matter what.

Sadly, young women don't have a ton of examples to look to of teen coming out scenes on TV. Look at any ranking of teen coming out scenes, and they're mostly male-dominated. Fortunately, that is changing all the time thanks to shows like FotB. And, Nichole's scene with Eddie is reminiscent of the time that Emily Fields came out on Pretty Little Liars (one of the biggest female teen coming out stories in popular TV). Emily’s parents didn’t know what to do about their daughter being gay (and that was hard to watch), but Emily’s friends treated it like nothing. The other characters were immediately supportive of Emily’s new relationship with Maya, even arranging a date for them in Spencer’s house so the two could hang in secret.

In fact, at least one of the characters knew Emily was gay before Emily was ready to tell it. As Glamour pointed out, there’s an early-season-one episode in which Emily gets a mixtape as a gift and Hanna says, “Is it from somebody you like back? Sorry, you don't have to tell me anything. But, Em, if there's someone in your life who cares about you, then I'm happy for you — no matter who they are.” Emily hadn’t come out at that point, but she knew there was going to be someone there to support her, no matter what.

Eddie definitely didn’t suspect that Nichole could be gay, but there is something in Eddie that Nichole finds safe — otherwise, she wouldn’t have chosen him to come out to first. It’s the same way in Pretty Little Liars — Hanna gave Emily that safe space to be herself. Nichole may eventually want to talk to her parents about her sexuality on Fresh Off The Boat, and whether that goes well or poorly, she’ll thankfully have Eddie there to back her up — while real life fans of the show get another great LGBTQ example on screen of such an important demographic: young women.