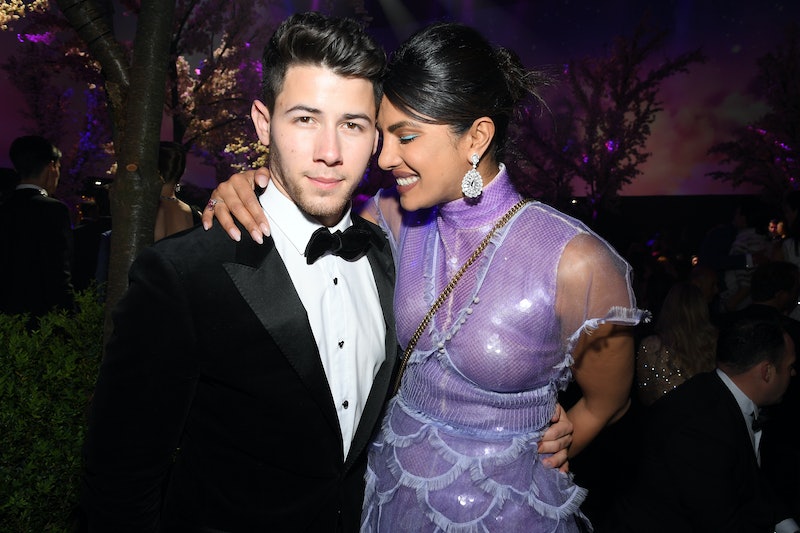 If you weren't already convinced that Nick Jonas and Priyanka Chopra's romance is a fairy tale, then just wait until you hear about one of their first dates. Jonas shared a post about falling for Chopra on Instagram that includes an adorable (and Disney-themed!) revelation that will have you humming "A Tale as Old as Time." While the story isn't from the first time they met — that happened at some point before the 2017 Met Gala — it does sound like May 25, 2018 may be when they officially started dating, because it's a date that the "Sucker" singer couldn't resist celebrating.

Per People, Jonas shared a photo taken of him and Chopra at the 2019 Cannes Film Festival. He captioned the romantic picture with, "One year ago today I went to go see Beauty and the Beast at the Hollywood bowl with a group of friends. One of those friends was the woman that would become my best friend, my confidant, my muse, my beautiful wife. I am so grateful for our journey together so far. You make me smile every day and you inspire me to be the best version of myself. I am honored to be your husband. I love you. @priyankachopra."

One year after their Beauty and the Beast date the couple is officially married, and they seem to be even more in love. Although she hasn't made her own separate post to mark this special relationship milestone, Chopra did leave a sweet comment on her husband's post. She wrote, "The most amazing thing that ever happened to me is you. I love you babs.." and then punctuated her words with a heart eyes emoji for good measure.

Jonas and Chopra officially tied the knot on Dec. 1, 2018. The couple had two ceremonies — a Christian one and a Hindu one — to celebrate the coming together of their two cultures. In a December, the Quantico star told People that it was Jonas' idea to have two ceremonies instead of just one. "It melted my heart," she told the publication. "Being able to have two big weddings, in India, with our closest family and friends was unbelievably special."

Their weddings were just part of the celebration. They treated guests to five days of pre-wedding and wedding fun, including a traditional Indian Mehendi ceremony. At the time, Chopra told People of their wedding, "It was all tears. All tears. I could not hold it in. I think I was nervous and scared. But as soon as the curtains opened, and I saw his face it was just like everything settled and I knew I was making the best decision of my life."

Since then, Chopra and Jonas have settled into married life, and even collaborated professionally. Shortly after the couple's wedding, the Jonas Brothers reunited, and Chopra, along with her sister-in-laws Sophie Turner and Danielle Jonas, starred in the band's "Sucker" video. These two are proving to be a total power couple that fans can't get enough of.

And knowing that their love story started with a date to see a Disney classic only makes the duo that much sweeter.