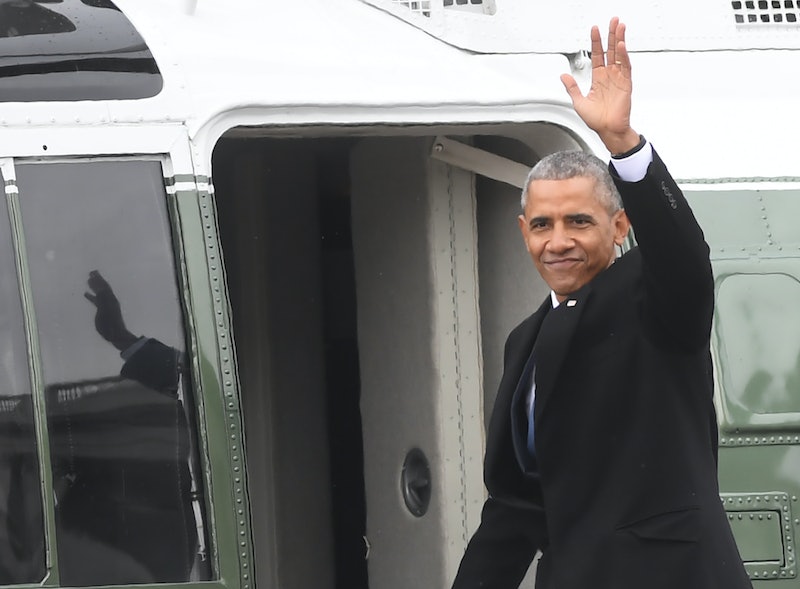 With the end of Barack Obama's presidency comes his reemergence into America as a citizen. But that doesn't necessarily mean that we're not going to be hearing from him. Fresh out of office, Obama sent his first tweet from his personal account as a citizen, and it's just what we have come to expect from a president who first and foremost worked for the people.

Now that the Obamas are out of the White House, they're off for a much-deserved vacation. They'll be spending some time in Palm Springs, where for the first time in eight years they won't have the weight of the presidency hanging on their shoulders. It will probably be a good time for them to relax a bit. As Obama said earlier this week, "I want to do some writing. I want to be quiet a little bit and not hear myself talk so darn much. I want to spend precious time with my girls."

But in Obama's tweet is also a declaration to get right back to work for the American people after he takes some rest and relaxation. And in a reply to that tweet, Obama introduced Obama.org, where he and Michelle will be communicating about their work from now on, according to TechCrunch.

At Obama.org, you can find a video of Barack and Michelle asking for America's help in deciding areas of focus for the Obama Foundation, which is the presidential library to be established in Chicago. Michelle said,

Send us your ideas, your hopes, your beliefs about what we can achieve together. Tell us about the young leaders and companies and organizations that inspire you. This will be your presidential center just as much as it is ours.

Clearly, Barack and Michelle are just as interested in helping Americans now that they are private citizens as they were when they were POTUS and FLOTUS.

Since 2013, Obama's handle has been run by Organizing for Action, a non-profit that advocates for issues like background checks for gun sales. Obama was the first president to utilize the power of social media. According to The Atlantic, he created his Twitter account two months before announcing his campaign in 2007. Now, after a four-year hiatus, he's taken the reigns from OFA, and he couldn't pass up the opportunity to throw in a little dad joke to announce his return, saying, "Is this thing still on?" That endearing type of joke is just one of many things to be missed in the coming years, but the Obamas' involvement in the foundation and work as citizens will go on — after they take a well-deserved break.

More like this
Romance Authors Are Mobilizing For Reproductive Rights
By Natalia Perez-Gonzalez
New Coins Unveiled As King Charles III's Reign Gets Underway
By Sam Ramsden
For Alexia Del Valle, Her Latinx Roots Influence All Of Her Content
By Alexis Morillo
TikTok's "Would I Look Good With Short Hair?" Hack Is Genius
By Olivia Rose Ferreiro
Get Even More From Bustle — Sign Up For The Newsletter