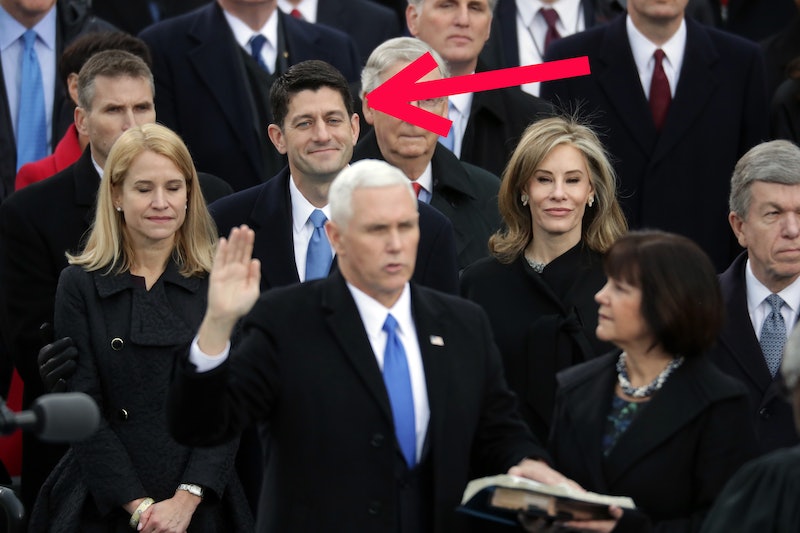 Dear Paul Ryan (more specifically your smug face): There are many spectacles to gaze upon during the inauguration of Donald Trump. There is the vague yet deeply encroaching cloud of terror settling on everyone who voted against him. There is the tear-soaked parting moment of Obama leaving the Oval Office, and subsequently, the piles of weary hearts in shambles. But presently, the most salient image in my mind resides in an elevated realm of terror, it is you, Paul Ryan's smug face at the inauguration.

You are beaming with a brand of delight that could only come from someone who I suspect sustains yourself off Soylent green formulated from the bones of poverty-stricken people whose health care you've been grabbing at during your crusade for a repeal of Obamacare, also known as the Affordable Care Act.

I'm writing to genuinely ask: Why are you like this? Pray tell, why couldn't you give your smug face one day off while a large portion of America mourns democracy? I understand, yours is the face of a man who recently confirmed that the GOP plans to defund Planned Parenthood once Trump is sworn in, and did this all with the gusto of a man who once confidently posed in a backwards hat while lifting weights for Time magazine. The world is truly your oyster to piss in, and you've taken all the liberties to drench it generously. But still, could you have mustered one moment of rest while Mike Pence was sworn in?

Your blissful smile would make a bit more sense if you were thinking about your new found passion of dabbing at Town Hall meetings while simultaneously working to strip people of their right to accessible health care. This is possibly one of the more relatable ways you managed to ruin an activity people once took joy in. Which in this case, was a trinity of dancing, Town Hall meetings, and going to the doctor.

But no, I have a strong sneaking suspicion your unwavering smile at inauguration speaks directly to the deeply painful truth that you are indeed excited for Trump to be named president alongside Vice President Pence. In fact, there may even be a sliver of longing pouring out of your face as you gaze upon Pence's anime villain glory, that someday you'll also attempt to force women to hold funerals for their miscarried fetuses.

All I can hope is that someday, the smirk on your face will indicate a genuine goodwill toward the people you're going to serve. I can hope that somehow, the joy you feel, is transformed into actions that benefit people less privileged than you. Until then, your smirk will appear as nothing more than an omen of some badly hatched legislation, or in the best-case scenario, a horrible attempt at dabbing.