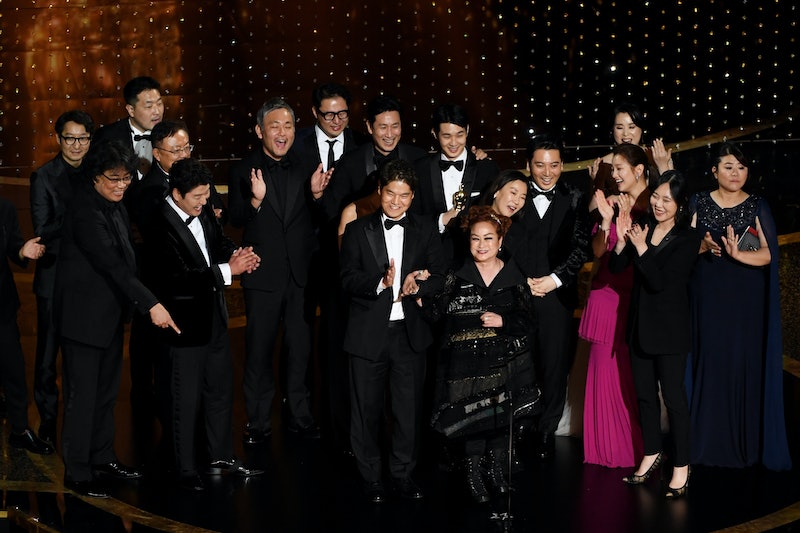 A foreign language film has finally won Best Picture. After picking up Best Original Screenplay and Best Director, Parasite won Best Picture at the Oscars, and the crowd didn't want the speech to end. Instead, they chanted until the lights came back on and the Parasite team was given more time to accept their historic award.

Bong Joon Ho took to the stage at the Oscars alongside the Parasite cast and producers, giving producer Kwak Sin-ae the chance to deliver her speech. (He'd just been on stage accepting his Best Director award, after all.) But when she was done, the lights dimmed and music started, and the audience was not having it. Instead, they began chanting "Up! Up!" and "Bong!" Charlize Theron, Tom Hanks, and more stars cheered, insisting that the lights and the mic be turned back on to let the Parasite team continue to celebrate their win on the international stage. All while presenter Jane Fonda was waiting on the side of the stage, ready to say goodnight to the viewers at home. Luckily, the Oscars producers listened to the crowd, turning the lights back on and giving the Parasite team more time on the stage. It might just be the first time the audience has demanded that the show go overtime.

Parasite's win might have seemed obvious to some, especially after picking up that Best Director trophy, but the film's historic achievement was still very much a surprise, which no doubt contributed to the crowd's enthusiasm. That, and the fact that the director delivered two of the most entertaining and endearing speeches of the night. And the audience at home was equally happy to hear more from the winners.

It was a joyous end to Oscar night, one that celebrated the importance of the moment. No foreign language film has ever won Best Picture, and the fact that Parasite also took home the award for Best International Feature Film makes it even more impressive. Not only is the movie the first South Korean film ever to win that award, it's also now representative of what will hopefully be a shift in the Academy. Movies don't have to be in English to be American or to be Best Picture. (Here's looking at you, Golden Globes.) If that doesn't deserve a little extra time at the mic, what does?