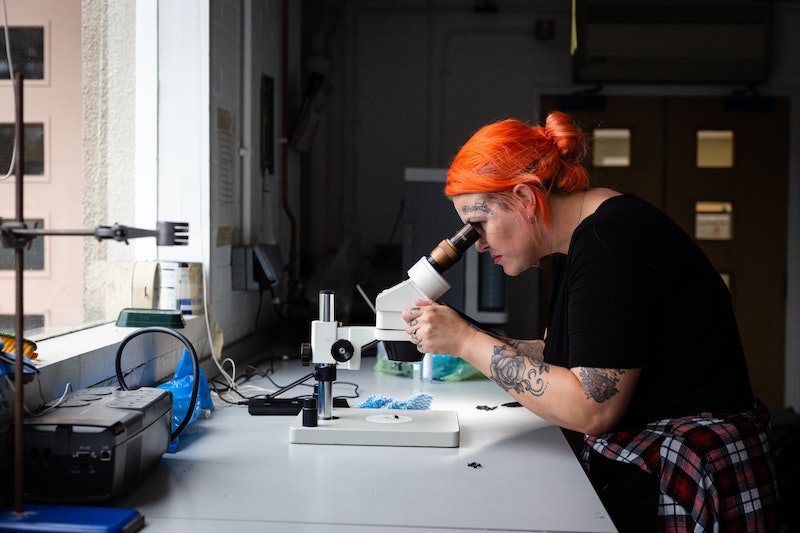 Death and Decay by Lush. That’s the preferred perfume of Carla Valentine, qualified Anatomical Pathology Technologist, author, and host of BBC Sounds’ new crime podcast, ‘mortem.’ It’s not cheap, in fact the “heady” blend of jasmine, ylang ylang, and sweet rose will set you back just short of £100. A little steep, you might think, at £1 per millilitre, but it is a price Carla Valentine is willing to pay to mask the potent and unparalleled whiff of her most frequent customer.

Yes, we are talking about dead bodies, but it’s not as morbid as it sounds. For much of her career, Carla has prepared bodies for burial. She’s also assisted pathologists in performing post-mortems, carried out autopsies, and, if we wanted to get really specific, sewed countless people back up. Despite her recommendation of Lush’s more macabre merchandising, the robust bouquet of decomposing body is hardly the most alarming part of her job: “sometimes, honestly, I think I smell worse from people who are on the tube in rush hour.”

Death has been an interest of Carla's for as long as she can remember. “I was reading Agatha Christie books when most of my friends were reading Enid Blyton,” she explains. She was also watching Quincy M.E. – the 1970’s mystery drama in which a medical examiner gets himself a little too involved in police investigations (I think we can all agree there needs to be a 2020 reboot) – when those same friends were no doubt settling in for the latest episode of Blue Peter. But Carla’s interest followed her closely into later life; as Malory Towers and corrugated cardboard crafting sessions became less and less exciting for her friends, Carla’s obsession with death only intensified.

As amateur sleuths and forensic hobbyists eagerly await news of Serial’s fourth series almost six years after its debut, popular culture has found itself more aligned with Carla’s specialist subject than ever before. The rise of true crime across terrestrial television and streaming has been exponential; every week a new or resurfaced documentary is uploaded to Netflix, Sky’s dedicated crime channel continues to thrive, and Patreon subscriptions to True Crime Obsessed cartwheel steadily towards 30k.

So it’s no surprise that Carla has noticed a change in reception when discussing her job at the dinner table. It’s not that people were turned off by the idea of embalming corpses for a living before Making A Murderer turned Stephen Avery into a household name. Rather, the difference is that now, Carla says, armed with r/truecrime and podcast series, “people keep trying to tell me things about my job.” Even her mum has been getting in on the action. “She drives me nuts, I did Forensic Science at university and she tells me, ‘Oh Carla, do you know you can use their DNA?’” She did, of course.

Whilst the decision to turn her passion into a 9 to 5 was fairly straightforward, Carla’s daily grind makes most other career paths sound like child’s play. Clocking in at an exhausting 12 to 14 hours, the average shift in a mortuary is about as far from a desk job as you can get. With just two breaks, “if you’re lucky,” the day is both lengthy and consuming. It also involves “a lot of coffee” and “ends with a shower,” for exactly all of the reasons you can imagine.

“The physical work is tough but you get used to it,” Carla says. Without going into too much detail, a mortician’s work requires, well, a certain level of strength. “I used to go to the gym all the time” she explains, “I used to think, ‘I'm just going to go full-Clarice Starling’ and be running around in fatigues in the gym”, because who hasn’t thought about hunting down their very own Buffalo Bill?

On the flip side, there’s the emotional work. “That will always catch you off guard,” Carla says. One of her main roles as a mortician was to do viewings with families of the deceased. Sometimes that means parents of infants, sometimes it means partners of suicide victims, and sometimes its elderly widows mourning the end of a 50 year marriage and friendship. Washing and preparing bodies to be “put out” for relatives is as draining as it sounds, and it doesn’t get any easier with time. “There's plenty of days when I've been doing something [particularly trying] and I've actually thought there is an easier way to get through the world than doing this kind of thing”, Carla explains. “But ultimately the reward that you get from a job like that, it sort of makes it worthwhile really.”