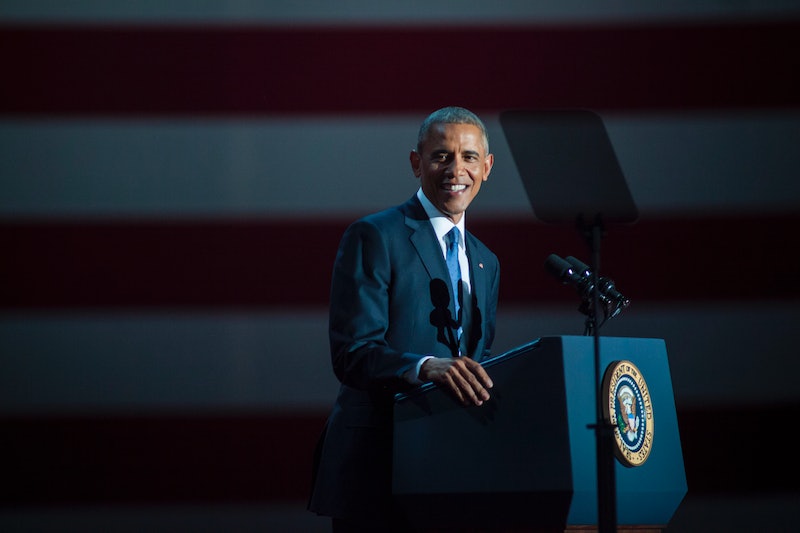 President Obama's final address to the nation Tuesday night was an impassioned plea to leave behind the political divisiveness of 2016 and forge ahead with one particular ideal in mind. NBC journalist Alex Seitz-Wald analyzed six former presidents' farewell addresses to determine how many times the word democracy was used, and Obama's farewell speech bested his next closest colleague by a factor of five to one. Obama's last speech is a reminder of how much the United States needs democracy right now, because only with the help of all the American people can the power of rule truly belong to us as a whole.

According to Seitz-Wald, President Obama said the word democracy 20 times in his 50 minute speech, which was a huge increase over his predecessor George W. Bush, who only used the word 5 times in his farewell address. It's one small indicator of how much the political climate has changed in the eight years since Obama took office. And though the politically cognizant don't need many more reminders at this point, this is an especially powerful one.

That the American political infrastructure has been reduced to simple repetition of its most basic foundation shows why so many are frustrated with Washington as it stands today. Even as Obama listed the legislative and executive accomplishments of his presidency, there was a distinct feeling of taking a step, or giant leap backwards, particularly if you aren't a fan of the next guy lined up for the job.

But in a way, Obama's repetition of the word actually disempowered Donald Trump when considering the literal translation of the word. Democracy, from the Greek words "demos" meaning people, and "kratia" meaning power or rule, means that the power of rule belongs to the people. Even a leader as flawed and schismatic as the President-elect cannot truly change that. For as long as its Constitution stands, the American government will always be able to be reconfigured if the people so demand. Our challenge going forward is figuring out how to make that happen.

It's the "demos" part in particular that everyone needs to keep in mind right now. What binds us all as American citizens is not our skin tone, income, or political ideology, but our shared civility and humanity. As long as everyone is working together to secure for each American the fundamental rights guaranteed to them, this nation will survive.

The United States feels precariously perched on a precipice right now, but together, with the democratic institutions that have successfully brought the country to this point, the American people can continue to make this country a better place for all.