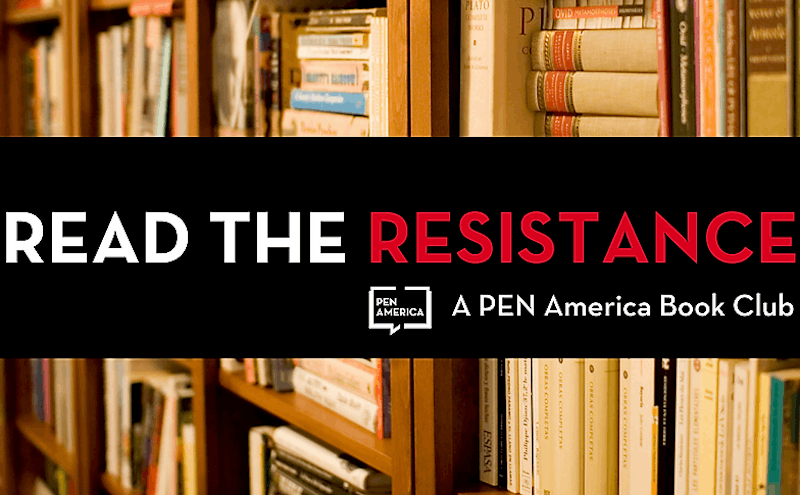 PEN America — a New York City-based literary organization dedicated to advancing literature, defending free expression, and fostering international literary fellowship — has just launched a new book club you’ll definitely want to join. It’s called Read the Resistance, and its mission is to highlight books and literature of and about acts of resistance. (And who knows, maybe it’ll even inspire some resistance of your own?)

Since Read the Resistance’s launch in July, the online club has reached over-2000 readers each month, who read a book that exemplifies resistance, selected by a renowned contemporary author. Even more tune into their Facebook Live broadcasts, which cap off a month of reading with a live conversation between readers and the recommending authors. So far, past books have included Nathaniel Hawthorne’s The Scarlet Letter, On Tyranny by Timothy Snyder, and Twitter and Tear Gas by Zeynep Tufekci.

Sarah Edkins Lien, PEN America Director of Communications and co-launcher of the book club, caught up with Bustle to give you — our lovely, resisting readers — all the juicy details. (She also tackled the thematic analysis and questions for October’s Read the Resistance pick, Jesmyn Ward's Salvage the Bones; so be sure to check that out after you read this interview.)

Salvage The Bones by Jesmyn Ward

“Our Writers Resist rally at the New York Public Library in January demonstrated the passion and drive of the writers and readers in our community to resist infringements on free speech and the degradation of language, but also to lend their voices other resistance movements and uphold the legacy of writers past,” says Edkins Lien, when I ask her how the idea for a Read the Resistance book club first came together.

“We knew we needed a sustained way to engage this community and help them find their place in the resistance even as we looked for our own. Our communications and advocacy teams have regular editorial meetings, which took on a new spirit in the first days of the [Trump] administration as we searched for opportunities to bolster the resistance in ways that only PEN America could. One day, it was as though a lightbulb flickered on in the ceiling above us: a book club to explore both the historic and ongoing interplay between literature and resistance. After a lot of reading, emails to authors, and compiling of book lists, Read the Resistance was born.”

It’s a book club that fits in well with the larger mission of PEN America — which is the largest of more than 100 centers of the global literature and human rights organization, PEN International. It’s also the United States’ largest literary and human rights organization as well. “PEN America has been working with writers to resist oppression, authoritarianism, and prejudice around the world for almost a century,” Edkins Lien says. “Read the Resistance is one of many new initiatives at PEN America that respond to the threats those forces pose now for our own country.”

The recommending writers Pen America selects are not only exemplary authors themselves, coming from a variety of backgrounds and demonstrating diverse points of view; the organization also looks for writers who have engaged in notable acts of resistance themselves.

“With so much at stake in 2017, it's crucial that our movement consider the personal experiences and struggles of writers of all backgrounds,” says Edkins Lien. “Domestic and international, men and women, straight and LGBT, novelists and journalists and poets, people of color, people of privilege, Muslims and Christians and Atheists and Jews and…” The list goes on. And on, and on, and on.

On Tyranny by Timothy Snyder

Read the Resistance’s homepage says: resistance has a long and storied history that is not narrowly defined — a history that lives on in the world’s literature. I ask Lien what parts of that long and storied history PEN America is most excited to explore through this book club — and if any of the book selections have especially excited or surprised club organizers or readers so far.

“Siri Hustvedt and Paul Auster surprised us with their selection for the very first book for Read the Resistance in July: Nathaniel Hawthorne's The Scarlet Letter, published in 1850,” Edkins Lien says. (Readers can catch up on all Read the Resistance’s book picks and Facebook Live chats on the book club’s site — so don’t worry, you didn’t totally miss out.)

“But after we read — or for many of us, re-read after the decade or two since high school — the puritan historical fiction, it became clear how much the story had to offer for today's resistance movement,” she continues. “In the gossipy townspeople, we saw fake news; in Hester Prynne's daring to question authority, we saw the bold leaders of the women's march; in the reclaiming of the letter A for Able, we saw the recent Supreme Court decision that allowed an Asian-American rock band to reclaim their name: The Slants. Inspiring stories of resistance are all around us if only we look.”

But what about people who are skeptical that the act of reading — even reading in a collaborative space like a book club — can really support the resistance? Can reading a book possibly inspire as much change as, say, attending a protest, calling a Senator, or volunteering with an organization? Edkins Lien has no doubt, it can.

“Each of us has our own strengths to contribute to the resistance,” she says. “Just as important as showing solidarity with like-minded folks is having the difficult individual conversations that address private incidents and persistent attitudes of bigotry and ignorance with friends and family members — like the now-proverbial Trump-supporting uncle at the Thanksgiving dinner table. Reading helps us develop the ideas and language we need to have these conversations and get through to our audience. And a book club — especially when reading a less overtly political novel like October's Read the Resistance selection, Salvage the Bones by Jesmyn Ward, about one family's experience of hurricane Katrina — can provide a shared experience between people of different political and social leanings on which to build deeper conversations about equality, human rights, and self-determination.”

So then, for all us book-lovers eager to know we’re playing a positive role in making our world a better place, what specific role does PEN America see reading play in resisting oppressive, tyrannical, and dangerous governments?

“Immersing ourselves in literary representations, both fictional and non, offers inspiration for today's movements — especially when we're feeling tired, worn down, and burned out by the near daily assault on our liberties,” says Edkins Lien. “But literature is also the way that we learn about the experiences of others and develop the empathy and understanding that it takes to be an ally in resistance movements across the spectrum. A rising tide lifts all boats.”

As far as what readers can look forward to from Read the Resistance next: “Brendan Kiely and Jason Reynolds, who teamed up to publish American Boys are our hosts for October, followed by dystopian novelist Lidia Yuknavitch in November,” she shares. “After a holiday hiatus, Nina McConigley, author of the PEN America Literary Award-winning Cowboys and East Indians.”