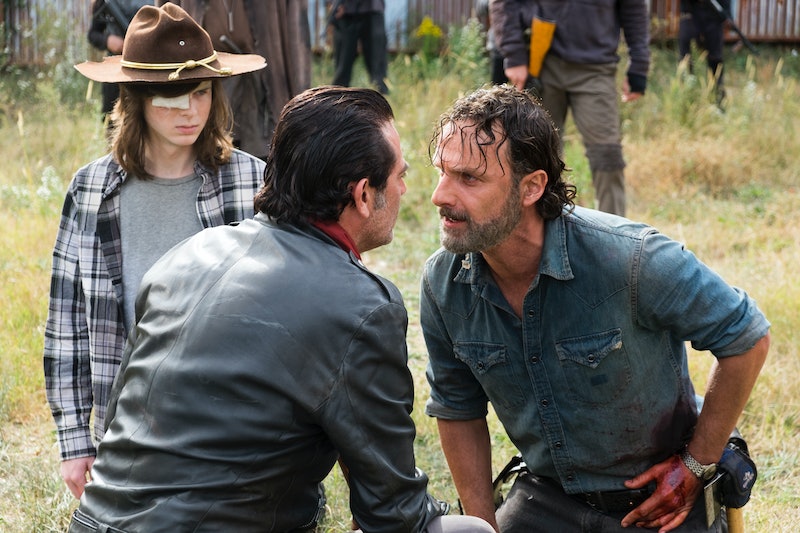 Fans of The Walking Dead comic have been anticipating Negan's arrival on the AMC series for years, but his grand entrance only caused a world of hurt and a whole lot of stress. Before the ultimate war between humans in the zombie apocalypse returns for the show's 100th episode, let's take a minute to remember what all went down last year. Recap The Walking Dead Season 7 because not only did Negan really do a number on the remaining survivors, but there are a lot of new players who joined this fight in solidarity.

Whether you're jamming to "Easy Street," wondering what ever happened to Heath, or adopting a kitten to be your own personal Shiva, a lot went down on the last season of The Walking Dead. What started off as traumatic — with the premiere episode dragging out Glenn and Abraham's sickening deaths between so many commercial breaks it felt like The Bachelor plus murder — ended up taking a few more hopeful twists and turns. We also lost Spencer, Olivia, one of the two Dr. Carsons, and Sasha, who was captured by the Saviors and then took her own life in order to sneak attack Negan as a zombie.

Rick Grimes was completely broken down by his new adversary at the beginning of the season, but he's finally on the rise. Here's what else happened in Season 7, broken down by the various factions.

Maybe the most whimsical thing to ever happen on The Walking Dead, the Kingdom is a new community that Carol and Morgan discovered after they left Alexandria. They have horses, an a capella choir, and have set up in an abandoned high school campus.

The group is lead by King Ezekiel, a former zookeeper and regular performer at the local community theater who is living his best life as an eccentric post-apocalyptic leader with a pet tiger named Shiva at his side. He takes a liking to Carol, who opts to live on her own for a bit.

The Kingdom "serves" Negan just like Alexandria and Hill Top, but they may or may not be poisoning the food supply. The pigs they hand over are fattened up on walker meat, which is extremely suspicious.

Maybe the most absurd thing to happen on The Walking Dead is the equally theatrical, in an avant-garde sort of way, trash-dwelling group of survivors led by a woman named Jadis who has maintained a very impressive sharp bob. They struck a deal with Rick in exchange for weapons, but double-crossed Rick's group and joined the saviors in the final battle.

After being separated from the group in Season 6, Tara and Heath ended up in an all-female beach community that has a lot of weapons. All of the men in their group had been slaughtered by the Saviors, so they were initially reluctant to join Rick's army.

Eugene is the worst, Carl's dark side returned, Negan's got a creepy polygamist thing going on, and Sasha got the best revenge ever. The Saviors may be living a rich life, but at what cost? Negan is a monster, and every scene with him is sure to raise your blood pressure.

Dwight's obsession with Daryl is weirder than ever, but you're probably still rooting for him and his wife to find each other again. There might be a hero in Dwight yet. We'll just have to find out.

After losing her husband, Maggie Rhee went to live at the Hilltop. She bonded with Jesus, and both Enid and Sasha join her in the historical community. Maggie's not in charge yet, but she should be — and Gregory knows it. Will he betray her? He's tried already, and could become a turncoat in Season 8.

Finally, Rick's home base became a bleak scene as Negan and the Saviors raided their supplies and took all of their weapons. However, you can't keep Rick Grimes down for long, and the Safe-Zone is now the center of an epic war between all of these groups of survivors.

What will happen next? Are the Whisperers from the comics coming to shake things up? Will a character from Fear The Walking Dead finally crossover? There are sure to be more casualties and more brutal loyalty switches in the episodes to come. For better or for worse, The Walking Dead is never predictable, but all of these groups going into Season 8 have something to fight for, which is really quite exciting and actually uplifting, for a change.

More like this
'The Ex-Wife’s First Look Pics Are Giving 'Gone Girl' Vibes
By Bustle UK
Here’s What Went Down Between Romeo, Jill, & Kira Before 'Bachelor In Paradise'
By Grace Wehniainen
‘SNL’ Finally Spoofed Nicole Kidman’s Weirdly Beloved AMC Ad & Nailed It
By Stephanie Topacio Long
Laenor’s Fate On House of the Dragon Differs from The Book In One Crucial Way
By Kadin Burnett
Get Even More From Bustle — Sign Up For The Newsletter