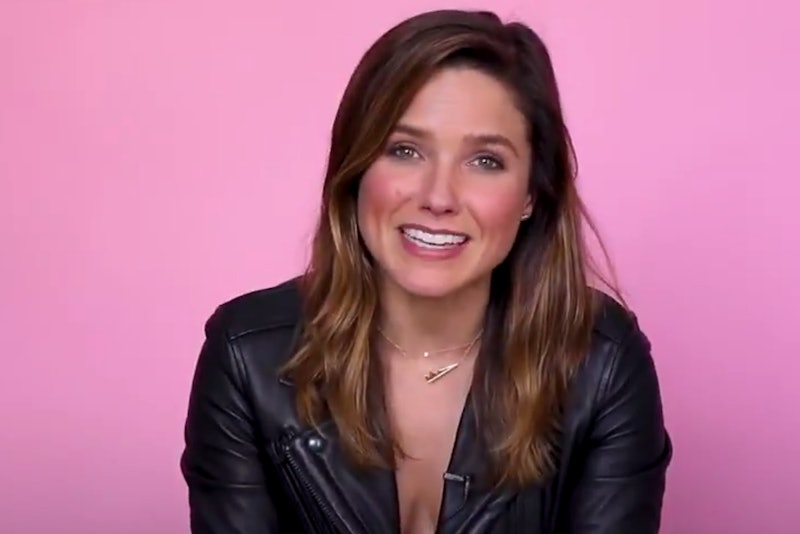 "Hands off my birth control" is what many women are declaring following the Trump administration's announcement that it is rolling back Affordable Care Act mandates and any employer will be allowed to claim a religious or moral objection as a reason not to cover birth control in their health insurance plans. Now, in a new video, Sophia Bush is explaining birth control and why it's actually basic health care — not just a contraceptive.

It's sad that this remains a topic of conversation, but thankfully there is this video from ATTN: featuring the former Chicago P.D. actor. In it, Bush lists significant reasons for why access to contraception shouldn't be up for debate. It isn't anyone's business, except for the individual needing it or wanting to use it for a number of reasons and not just because they want to prevent pregnancy. "Seventy-one percent of our elected officials are men. And they don't know sh*t about birth control," Bush says.

"Birth control is about more than just contraception," she notes, before explaining that birth control is necessary to help with menstrual pain (which, as she points out, can be like getting kicked in the balls over and over again), to help regulate the flow of periods, and to even control chronic acne. To be exact, and according to ATTN:, here are the percentages of women on the pill and why they're using it:

Access to birth control has also helped reduce abortion rates. According to a study printed in January and conducted by the Guttmacher Institute, "In 2014, the U.S. abortion rate reached the lowest level ever recorded. A new analysis in the Guttmacher Policy Review argues that improved contraceptive use resulting in fewer unintended pregnancies likely played a larger role than new state abortion restrictions in the decline between 2011 and 2014."

Oh, and, yes, there are even some women who take birth control in order to have sex without getting pregnant. Shocking, isn't it? As the One Tree Hill star says, "Newsflash: that's a good thing for those women, and also their partners who aren't ready to be parents." She adds, "Side note: if you are using birth control for fun, consensual sex, more power to you." Preach, Sophia, preach.

Bush points out in the video that there are some lawmakers who think women shouldn't have sex as an alternative to birth control. "You're not telling men to have less sex. Ever. And you want to keep Viagra covered by insurance." Bush continues, "If your fantasy ability to chase us around with your four-hour erections isn't up for debate, our contraceptive access definitely shouldn't be, either."

The video also supports The United States of Women's campaign #HandsOffMyBC, which is taking action to protect women's access to birth control. "We're committed to empowering women to make their own health decisions AND take action to resist these attacks on women's rights," their website reads.

For those unaware, the Trump administration has suggested that conception use could lead to less safe sex, according to TIME. As listed by the Department of Health and Human Services, "Imposing a coverage Mandate on objecting entities whose plans cover many enrollee families who may share objections to contraception could, among some populations, affect risky sexual behavior in a negative way." Upon the announcement of Trump rolling back the birth control mandate, HHS press secretary Caitlin Oakley commented, "No American should be forced to violate his or her own conscience in order to abide by the laws and regulations governing our healthcare system." Oakley continued, "Today's actions affirm the Trump administration's commitment to upholding the freedoms afforded all Americans under our Constitution."

Dr. Jeffrey Peipert, chair of the obstetrics and gynecology department at Indiana University School of Medicine and someone who has studied the effects of contraceptives, doesn't believe birth control coverage leads to riskier sexual behavior. "There is no evidence to support the idea that giving contraception promotes sexual activity," he told TIME. "These are myths that are to the detriment of public health. I would argue that not providing contraception is clearly increased risk-taking behavior.” Furthermore, in 2014, Peipert and his Washington University colleagues published a study showing no-cost contraception provided to women did not increase the likelihood of riskier sexual behavior.

There are major misconceptions about birth control and what women use it for. Yes, pregnancy preventions is a reason, but it's not the only one. It's time to listen to what Bush is saying and start believing that access to contraception is basic health care.