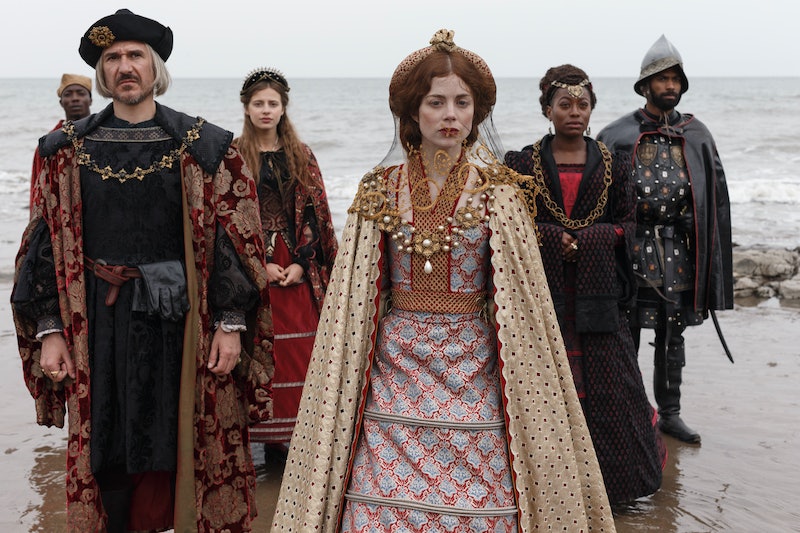 The Spanish Princess is the first Starz series based on Phillipa Gregory's historical fiction series whose titular protagonist is fairly recognizable to fans. The White Queen and The White Princess focused on lesser-known royal women during the War of the Roses, but even if you barely scraped by in high school history class, you probably know who Catherine of Aragon is — the first wife of Henry VIII. You know, before he started beheading his exes. That said, The Spanish Princess reveals a lot about Catherine that may be surprising.

It was Queen Catherine of Aragon and King Henry VIII's annulment (so that he could marry Anne Boleyn) that caused the country to leave the Catholic Church and create the Church of England. However, as The Spanish Princess shows, there's so much more to the real Catherine of Aragon that was never archived in our history text books.

Spanish Princess star Charlotte Hope says in an interview with Bustle that that is part of what she likes about the project. "I think that a lot of this show and this story is about telling the stories and perspectives of people who were there, but whose stories weren't told," Hope says.

We've seen Henry VIII's story before. It's been told. The Spanish Princess is taking it back a few years and giving us a new perspective. Even Hope, when she got the role, didn't know that Catherine and Henry had over two decades of happy marriage before everything fell apart. "My only perception of Catherine was that she was this kind of like dowdy, pious, barren woman," Hope says, "and actually she's just like fierce, passionate warrior princess." She had quite the reputation in Spain for being brave, determined, and ambitious. She also, like, wants to take a nap sometimes, and stay in the bath a little while longer.

First, what you may not know is that Catherine arrived in England betrothed to a different English prince entirely. Her first husband was Prince Arthur who (historical spoiler alert) died soon after they were married. The Spanish Princess starts there, well before Henry was on the throne and beheading wives left and right.

Another thing that The Spanish Princess does is introduce characters of color based on real people who were in England at the time. One of Catherine's ladies in waiting, played by Stephanie Levi-John, is a sub-Saharan African woman. "There's like one line of history in a history book about Lina de Cardonnes," says Hope. "We got to go and create a whole story," she says, about this woman who fell in love as an immigrant in the Tudor court.

Many of the people of color on The Spanish Princess are Muslim, as well, which the show does not ignore — nor the fact that Catherine's parents, the infamous Spanish monarchs Ferdinand and Isabella, waged war against Islam. "[Emma Frost] said the other day, 'history is written by the victors,'" says Hope, referring to the showrunner, "and the victors were white men — as has been the case with a lot of history."

Sure, this is historical fiction, not a documentary. The Spanish Princess is dramatizing what actually happened, and filling in many of the gaps. Still, what they've found and chosen to expand on is fascinating, and re-contextualizes this complicated woman in a really compelling way.