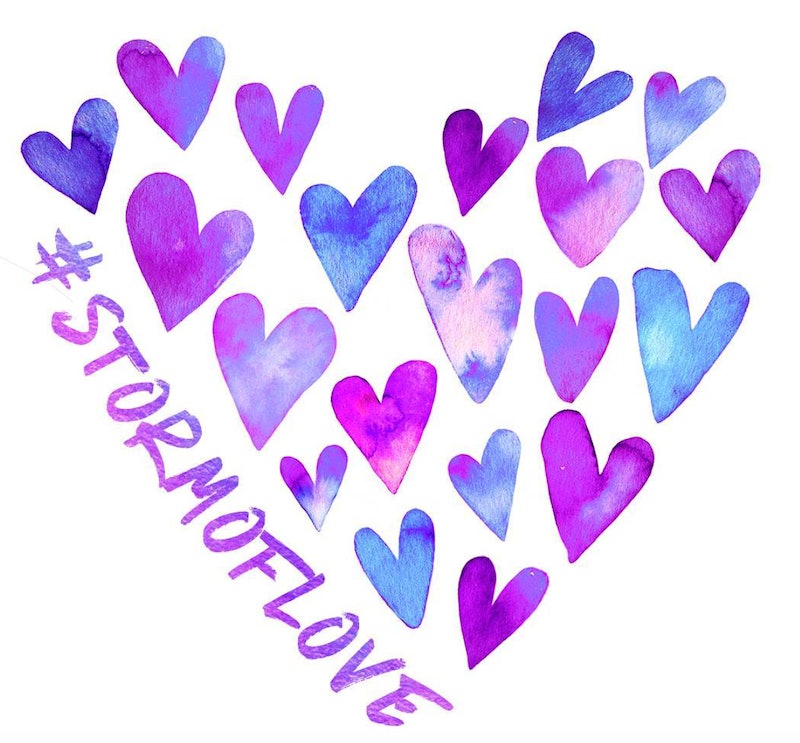 Tarte Cosmetics, known for its high-performance naturals, is putting its money where its "heart" is. The brand spending the next day (and then some) tirelessly aiding victims of the recent rash of hurricanes affecting Texas, Florida, Puerto Rico, and the earthquakes of Mexico and beyond. Tarte's #StormOfLove live fundraiser will run for 24 hours and has an ambitious but attainable goal of raising $500,000.

What makes this fundraiser different from so many other beauty brand-backed charity efforts is the fact that it has nothing to do with makeup products. It's not about moving more tubes Tarte's best-selling Lip Paints or its Amazonian Clay Foundation and then donating a portion of those proceeds.

Promotion of Tarte products is not involved... at all. That's a beautiful and selfless move on the brand's part. Here's how #StormOfLove works and how you can participate.

Brand founder and CEO Maureen Kelly created "heart to tarte," a non-profit, in the wake of the devastation she personally witnessed in the Florida Keys. Kelly launched this new charity in order to make donations easy and direct, and because the concept of giving back is "intrinsic to Tarte's DNA," according to a press release.

Tarte's #StormOfLove fundraiser is the first philanthropic initiative tied to Kelly's new charitable endeavor, which was also designed to help and support Tartelettes in need all over the world.

One hundred percent of the proceeds raised by #stormoflove efforts will be donated to disaster relief efforts, with the brand matching donations up to $200,000.

#StormOfLove kicked off on Wednesday, Oct. 11, and runs through the entire day and night. It's essentially a social media telethon, with 40 top beauty and lifestyle influencers working with Tarte to encourage support for charities of their choice working to help those impacted by devastating natural disasters.

The influencers are hosting 30-minute Facebook Live Q&A sessions, discussing the charities they are supporting and why. Knowledge is power.

There are donation codes provided, so that the brand knows which charity your donations are meant to support.

The fundraiser began with Nicol Concilio, who launched a golden brush line with the brand last year. Other influencers participating include grav3yardgirl, who also had her own range of Tarte products in 2016, Chrisspy, Mahogany LOX, and more.

Charities that the influencers chose to support are varied and important, and include UNICEF, Waves for Water, Hispanic Federation, Habitat for Humanity, and ASPCA.

Fans can also text "GIVING" to 56512 to participate. Donation channels are accessible via the Tarte Instagram and website.

This Insta video demonstrates how quick and easy it is to make a donation through the campaign. You can donate any dollar amount to the charity of your choosing. Tartelettes unable to contribute financially are encouraged to share the social links so that others can be informed about and potentially support this fundraiser.

Kelly also shared a heartfelt note about why she launched this initiative. It is posted below.

"Over the past several weeks there has been an onslaught of devastating natural disasters, which have affected millions of people internationally & created a dire need for aid. These recent tragedies have hit close to home. My family & I live in the Florida Keys & have witnessed the devastation first-hand, but there are more consequences of these natural disasters beyond the challenge of rebuilding. tartelettes around the world lack food, clean water, medical aid, emergency supplies, shelter, & more basic human rights. My hope is that by joining together, we can help shower these survivors with a #stormoflove, creating relationships with local charitable organizations & helping the people who need it most."