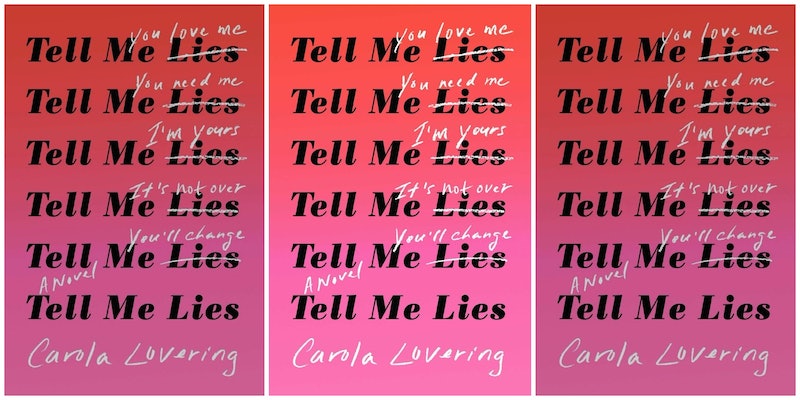 There are those people who come into our lives, the ones that, despite their most obvious flaws and repeated mistakes, linger. They're charming and complimentary, suave and confident. They always know just what to say to make you feel special. That is, until they don't want to make you feel special anymore. When they turn cold, silent, unreliable, you can't stop yourself from becoming a ball of anxiety, doubt, and fear. They aren't right for you — they were never right for you — but that doesn't stop you from trying to make it work anyways, or for hoping, against all odds, they will change. Many people have been there — in dysfunctional relationships with toxic partners — which is what makes Carola Lovering's new novel Tell Me Lies such a fascinating read. A twisted story about the guy who is all wrong, and the girl who is sure he will become Mr. Right, reading it is like seeing a slow-moving train wreck, one you've been involved in before, one where you can see exactly how and why things went off the tracks.

When Lucy Albright arrives on the campus of her small California college, she couldn't be happier to be so far from her Long Island home and the mother whose betrayal she's never been able to forgive. Ready for a fresh start, Lucy dives head-first into coed life and all that comes with it, including her new and beautiful friends, wild parties where booze and drugs flow freely, and Stephen DeMarco.

When Lucy first sees Stephen at a party, she isn't sure what to make of him or his piercing green gaze. “I couldn’t decide if he was handsome. He looked like a younger Christian Bale, maybe, but thicker. A weaker chin. Not as overtly good-looking," she says. Yet despite his less-than-perfect looks, Lucy can't look away. "But there was Something About Him. A pinch in my stomach.”

It's different for Stephen: the moment he sees Lucy, he knows exactly what he wants from her, and exactly how he is going to get it. “I knew how to catch the interest of girls like Lucy," he says she catches his eye. "It would take time and effort, like most good things in life, but I wasn’t in a rush. I had plenty to keep me occupied, including the dilemma of Diana Bunn.”

It doesn't take long for Stephen to seduce Lucy, and so begins a years-long toxic love affair laden with secrets, lies, manipulation, betrayal, and a lot of really hot sex. But no matter how dysfunctional their relationship gets, Lucy can't seem to quit Stephen. Not when she catches him lying, not when he sleeps around, not when he is in a relationship with another girl, and not even, years later, when she sees him at her friend's wedding with his fiancée on his arm.

“There are 250 people packed into the church, but I only see one, and I see him right away because he’s the one person looking straight at me, his emerald gaze unwavering," Lucy remarks from the altar. "He sits close to the front, in the fourth row, and there is a girl next to him I recognize immediately because I’ve looked at her Facebook pictures countless times, and I’ve cried in front of those pictures and I still look at those pictures — infrequently, but I do.”

Tell Me Lies is an addictive story you won't be able to put down. Alternating between Lucy and Stephen's point of view, this seductive coming-of-age novel chronicles their tumultuous relationship with searing honesty and keen insight into the modern relationship. But don't be surprised if, while reading it, you feel yourself physically reacting to the story. I certainly did.

Throughout the novel, I found myself clenching my fist, biting my lip, rolling my eyes, shaking my head, even shaking the book, thinking Why are you doing this to her, Stephen? While it was painfully relatable to read Lucy's inner conflict over whether to be with Stephen or not, it was almost nauseating to read Stephen's carefully plotted strategy to get women into bed. “When I decide I like someone," he explains without any sense of remorse or guilt, "my first step is to gather as much information as possible about every aspect of her life in order to more closely resemble her ideals partner.”

What's even worse are the mental gymnastics he goes through to explain away his poor treatment of women. As Stephen puts it:

“What I’ve come to learn and what most people fail to understand is that love is a choice. If you assess the worth of your relationship solely in terms of your feelings it is likely to fail, or at least be extremely short-term. You cannot go on having these ‘feelings’ for someone forever. With girls, the exciting part is winning their affection. That’s the fun. Then you have to choose who you’re going to love, backed by the reason why. This may sound a bit calculated, but in all honesty, I can’t stand being single. I’ve always found life to run much more efficiently with a girlfriend.”

But we have all dated a Stephen, or at least, know a Stephen, or watched a friend enter into a hopeless relationship with one. That is what makes Tell Me Lies so relatable, because anyone who has ever been caught up in the wrong kind of romance, one so wrongly mislabeled as "love," has been there. That is also what makes this novel so important: it provides a window into a dysfunctional relationship, one that is all too common in our culture, and by doing so, it forces readers to confront the unhealthy dating norms we have come to accept that are truly unacceptable.

“What was I doing? Why was I still chasing him? Did I even like him as a person? How could I ever bank on a future with someone I couldn’t trust?" Lucy asks, echoing sentiments so many of us have had in toxic relationships. "There was that one stubborn, veracious part of me that knew wanting Stephen had to be wrong. If you ignored the gray and got really honest, if everything in the world was separated into black and white, into good and bad, Stephen would fall into bad.”

In Tell Me Lies, the toxicity of Stephen and Lucy's relationship is laid out in black and white, right there in alternating chapters for the reader to see. But in real life, identifying unhealthy relationships can be a lot harder, and a lot more painful. That is why activists in the #MeToo movement aren't just asking people to fight back against overt sexual harassment and assault, but demanding our culture addresses the dangerous dating norms we have come to accept over time. We need to have an honest dialogue about the harmful ways men treat women like sexual conquests, and about our willingness to accept as "just playing the game." Books like Tell Me Lies that peel back the curtain to reveal the true ugliness of an all-too-common relationship can help us do that.

A sizzling summer read, Tell Me Lies is an absorbing novel with plenty of twists and surprises along the way, including a satisfying reveal near the end. But it's also a fascinating examination of toxic relationships, dysfunctional relationships, and the bad habit we have all been guilty of having: confusing lust with love, drama with maturity, and Mr. Wrong for Mr. Right. Only maybe now, after seeing Lucy and Stephen's trainwreck unfold, we'll all be able to recognize the signs in our own lives a lot sooner.