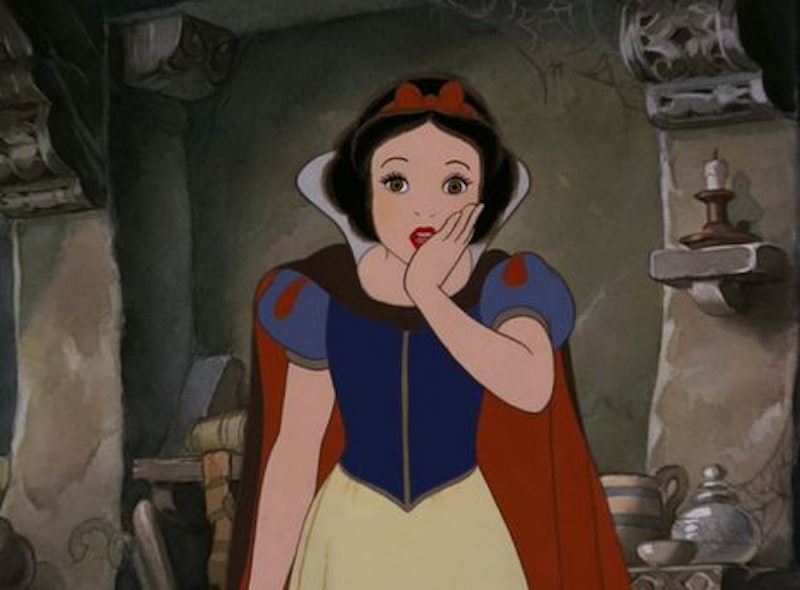 Forget everything that happened this week; all other rumors have been officially canceled. The only one that matters now is the floating rumor that there will be a Disney-themed Cards Against Humanity extension pack, which is not even something I thought I needed until I typed those words with such gusto that the keys on my keyboard nearly snapped under my fingertips like the Incredible Hulk. (Bustle has reached out to Cards Against Humanity about the Disney rumors, and will update this post upon response.)

It is worth noting that this rumor, in the meantime, is hella unconfirmed. According to Pretty52, the official Cards Against Humanity page posted an image of 18 Disney-themed cards, nine black fill-in-the-blank cards and nine white noun cards that referenced Disney trends and characters in a manner that were decidedly NSFW. They ranged from the relatively inoffensive cards of "Bambi's death mother" and "unreasonably laying claim over everything the light touches" to "Jane and Tarzan's wild sex adventures". (OK, it actually gets way worse than that because it's Cards Against Humanity and of course it does, but there are some things I can't in good conscience type without worrying about what Chris Pine will say to me when I meet him at the gates of Heaven one day.)

The post allegedly went up and was taken down on Tuesday, and some people claim to have screenshots of them. As far as receipts go, these are DEFINITELY ones you don't want falling out of your purse. YIKES on ice, they are inappropriate.

If this is actually happening it would, of course, effectively ruin the childhood of every '90s baby whose eyes beheld them — but if you've been paying attention to the expansion packs Cards Against Humanity has already rolled out, they've already done just that. On their website they still are selling the '90s extension pack, as well as the Geek, Sci-Fi, Fantasy, World Wide Web, and Food extension packs. If you really feel like poking your own PTSD with a stick, you can also still purchase the Vote For Hillary and Vote For Trump extension packs, while supplies are still available.

While this expansion pack is obviously priority number one for Generation Disney (coming in just slightly on top over the Frozen sequel and winning free tickets to that Beauty and the Beast Disney cruise), alas, we have no concrete news to go on. Let's hope the Millennial Fairy Godmother intervenes and makes this happen, because if there was ever a time that the world needed some laughs at the expense of their last shred of innocence, it's 2017.