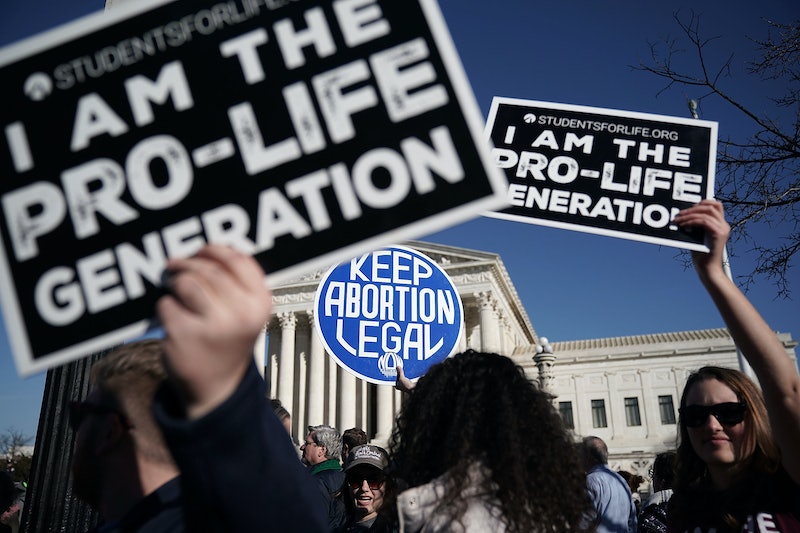 In this op-ed, Romper senior identity editor Danielle Campoamor highlights the effect that Texas' death penalty abortion bill would have on mothers, who make up the majority of people who have abortions.

In 2016, then-presidential candidate Donald Trump told MSNBC's Chris Matthews that people who have abortions should suffer "some form of punishment." Trump later attempted to walk back his comments, because even among self-proclaiming "pro-life" Republicans, the thought of legally punishing people who seek abortion care was considered fringe. Not anymore. On Monday, GOP lawmakers in Texas introduced a bill that would categorize abortion as a homicide and charge someone who undergoes or provides the procedure with capital murder, a crime that's punishable by death in the state.

The bill was originally introduced in 2017 but never received a hearing, according to CNN. Even though Republicans currently control both chambers of the Texas legislature, House Bill 896 is unlikely to pass out of the Judiciary and Civil Jurisprudence Committee, as it is a clear violation of Roe v Wade, the 1973 Supreme Court decision that gave pregnant people the constitutional right to end their pregnancies.

Still, the bill doesn't have to make it to the state House floor for debate, or be passed into law, for the so-called "Party of Family Values" to make its goal clear. They don't want to preserve life. They want to end lives — mother's lives.

While the GOP might have a very specific idea of who seeks abortion care, 59 percent of people who have abortions have at least one child already, according to the Guttmacher Institute. Anti-choice zealots have worked tirelessly to paint people who have abortions as anti-baby and anti-family — angry "feminazis" popping morning-after pills on their way to their 10th abortion so they can have consequence-free sex with the men they hate. But walk into a Planned Parenthood waiting room, and you're more likely to see a mom filling out paperwork than an "irresponsible teenager" or "promiscuous 20-something."

It is mothers — people who have already carried a pregnancy to term, endured the physical and mental strain of childbirth, waded through the postpartum period, and experienced breastfeeding, bottle-feeding, late nights, sleep regressions, potty training, and school drop-offs — that are having the majority of abortions.

Three-fourths of patients who terminate their unwanted pregnancies say their concern or responsibility for other individuals was the reason why they made that decision, Guttmacher reports. It's moms who are terminating their pregnancies, for a variety of reasons as complex as the moms themselves. And it's moms the GOP seem hellbent on punishing. The very people the GOP claim to champion are now the people some Republican lawmakers in Texas are publicly and proudly hoping to put on death row.

Anti-abortion policies have a history of being associated with rising maternal mortality rates and declining infant and child health. According to a 2017 joint report by the Center for Reproductive Rights and Ibis Reproductive Health, states with the highest number of abortion restrictions tend to have the worst women and children's health outcomes, as well as the fewest policies in place that advance and maintain the well-being of families. Between 2010 and 2015, states passed more laws restricting access to abortion care than any other five-year period since Roe v. Wade was decided. Currently, the United States has the worst maternal mortality rate of any developed country — and it's on the rise.

The introduction of this Texas bill proves that the "Party of Family Values" doesn't actually want to protect children or families.

Georgia just passed a law banning abortion past six weeks gestation — before most people even know they're pregnant — and earlier this year the Supreme Court blocked a Louisiana law that would've left the state with only one clinic and one doctor certified to provide abortion services. That temporary stay on the law is likely to be challenged.

The GOP's attempts to turn a country that widely supports abortion into a "pro-life" one has often hinged on the death of mothers, both at home and abroad. When President Trump reinstated the global gag rule shortly after taking office — cutting off U.S. federal funding for any global organization that so much as mentions the word abortion to patients — he did so knowing that, according to the World Health Organization, 830 women die from pregnancy or child-birth related complications around the world every day. He proudly proclaimed himself to be the "most pro-life president ever."

The introduction of this Texas bill proves that the "Party of Family Values" doesn't actually want to protect children or families. It wants to tear families apart and separate mothers from their children, either indefinitely or permanently. It punctuates, again, the hypocrisy of a movement that claims to value life but enacts policies that do little to protect it. It highlights Republicans' unmistakable willingness to send mothers making personal medical decisions, often for the benefit of their families, to their untimely deaths — and it shows that GOP politicians are all too happy to sign the death certificate themselves.