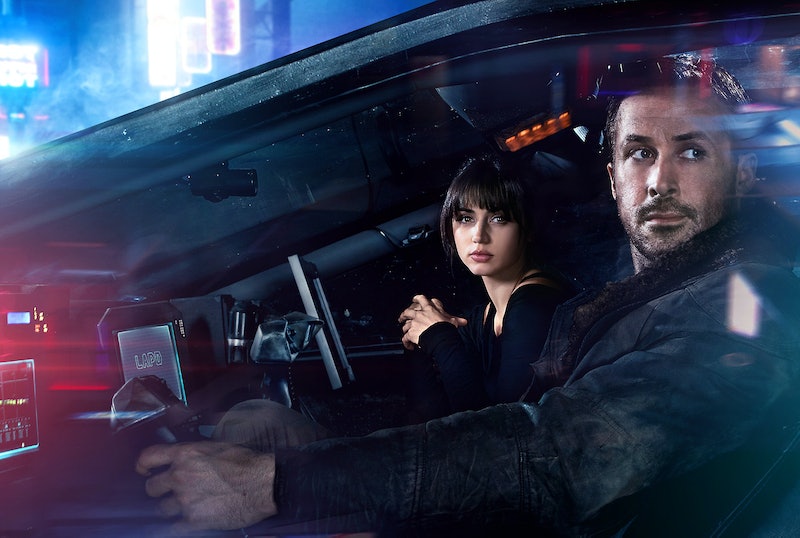 Post-credits scenes can be super fun (just ask the Marvel Cinematic Universe), but they can also be a bit stifling — again, just ask the Marvel Cinematic Universe. Not only can they lead you down a constrictive creative path by dictating the direction of a future follow-up movie, they can also give the impression that the director wasn't happy with the film as is. And Blade Runner 2049 director Denis Villeneuve is confident that his finished film needs nothing extra added to complete it. "When I cut something out, it's because it's dead after that. It's like a branch of a tree, cut," Villeneuve said in an interview with Superhero Hype. "If it's not in the movie, it's because we felt it was not appropriate or good enough." Not only does Blade Runner 2049 not have a post-credits scene, it also won't follow in Blade Runner's multiple rerelease footsteps.

So, Villeneuve had nothing to add to Blade Runner 2049 after the credits, but what does that mean for a potential sequel? Very little, it turns out. A follow-up film still is a possibility, and while fans of the original 1982 release might have been willing to wait three decades for a sequel, it's safe to say that new audiences will not. Given fans' desire for a third Blade Runner film and society's decreased patience when it comes to time between franchise installments, the fact that Blade Runner 2049 has no post-credits scene is no indication that another sequel has been ruled out.

Both Villeneuve and new star Ryan Gosling have said they would be open to making another film, should the public desire one. "If there was a story to tell that was worth telling and worth the effort that we were going to put into it, then sure," Gosling said in a joint interview with Villeneuve for the Los Angeles Times. "But I have yet to hear that story," he added. As for the director, Villeneuve said he hadn't even thought of it, but was careful not to shut the door on the possibility in his response. "So a third one — if there is a third one — is not something I've thought about at all," he said.

That said, Gosling and Villeneuve are not necessarily crucial to a potential third Blade Runner film. The original movie took place in a futuristic 2019, and with the new film picking up in 2049, that leaves 30 years worth of unexplored story yet to be told, not to mention the potential for films taking place even further in the future.

Original Blade Runner director Ridley Scott, who acted as executive producer on 2049, has said he'd be more than willing to create an entire Blade Runner universe, similar to what he's done with his Alien films. "Listen: Everyone else is, so why not?" he told Yahoo! Movies when asked about the potential new franchise. "I love to work. The French say, 'Work to live,' and I live to work." In the same interview, Scott said he was planning to continue the franchise with Gosling, but actors and contract negotiations can be fickle things. Regardless of whether or not Gosling returns for another film, it looks like Scott has enough enthusiasm to keep the franchise growing.

More like this
A New Scooby-Doo Movie Confirmed Velma Is Gay & Twitter Is Pumped
By Radhika Menon
Everything You Need To Know About ‘Black Panther: Wakanda Forever’
By Bustle Editors
Christian Bale Sang With Taylor Swift & His Daughter Can't Believe It
By Radhika Menon
Lindsay Lohan & Jonathan Bennett Celebrated Mean Girls Day Very Differently
By Jake Viswanath
Get Even More From Bustle — Sign Up For The Newsletter