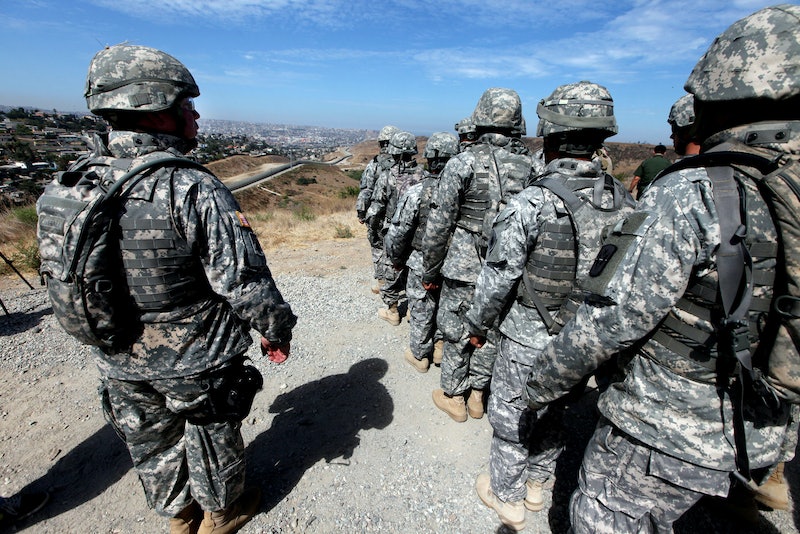 After more than a year of legal battles, President Donald Trump's ban on transgender people serving in the military went into effect Friday. The policy effectively reverses an Obama-era decision to allow transgender troops to serve openly and have access to gender-affirming medical care. But not everyone appears intent on enforcing the Trump administration's ban on transgender service members. Indeed, the California National Guard pushed back on Trump's transgender ban, telling The Hill it would "explore every avenue" in order to ensure that transgender people "are afforded every opportunity to serve" should they want to.

"Anybody who is willing and able to serve state [and] nation should have the opportunity to serve," Maj. Gen. Matthew Beevers, the California National Guard's assistant adjutant general, told The Hill. "It's unconscionable in my mind that we would fundamentally discriminate against a certain class of people based on their gender identity. That should be the absolute least of our worries."

According to NBC, the Department of Defense has claimed the new policy is not a ban on transgender troops as it allows for any service member who has already been diagnosed with gender dysphoria to continue transitioning, taking hormones, and serving in their gender identity. Going forward, however, anyone in the process of or who has already undergone a gender transition will be barred from enlisting unless they serve in the gender they were assigned at birth and adhere to the grooming stereotypes associated with that gender, the Associated Press has reported. What's more, any service member diagnosed with gender dysphoria after the policy has gone into effect will be forced to serve in the gender they were assigned at birth or risk being discharged.

According to CBS News, the Department of Defense has estimated that there are nearly 15,000 transgender troops currently serving in the military who stand to be impacted by the new policy. For those who need it, Axios has a great explainer of how military policy regarding transgender service members evolved under both the Obama and Trump administrations.

This isn't the first time the California National Guard has stood against Trump's transgender ban. In February, Beevers told the state's Assembly Veterans Affairs Committee that no service member would be discharged for having been diagnosed with gender dysphoria. "As long as you fight, we don't care what gender you identify as," the Advocate reported he said. "Nobody's going to kick you out."

Beevers reaffirmed the California National Guard's commitment to that Friday, telling The Hill that every transgender service member currently serving in the group would remain in its ranks. "Further, we will not treat any soldier or airmen any differently today, than we did yesterday," the news outlet reported he said. According to The Hill, Beevers said it was "a bit frightening" that the Department of Defense was no longer willing to take whomever is eager to serve.

"Your gender identity is the least of our concerns," the outlet reported Beevers said. "We're more worried about your ability to fight and win our nation's wars and protect the homeland and protect California from the effects of wildfires and climate change and earthquakes and everything else here that happens in California. That's our concern."