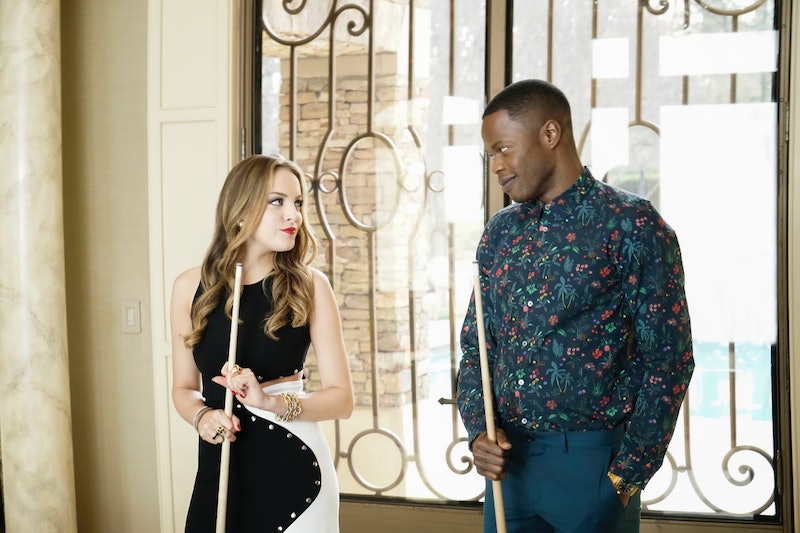 Television revivals and reboots are a dime a dozen in today’s television world, but some of them are particularly exciting. The Will & Grace revival still feels fresh in these trying times, and some viewers really loved the Gilmore Girls revival. Next on the docket is Dynasty, the remake of the original 1980s mega soap. Normally I’d say, “Why do we need this,” but Josh Schwartz and Stephanie Savage of The O.C. and Gossip Girl are at its helm, and boy, do they know how to make a show. But staging a remake means updating it for a new audience, and the Dynasty reboot is better in so many ways than its predecessor — mostly because it's just more inclusive. Rather than rebooting the show and telling the exact same story, The CW took the opportunity to fix a lot of messed up things that happened in the original.

The gist of Dynasty is such — Blake Carrington, head of power company Carrington Atlantic, marries Krystle (or Cristal in the reboot), and Blake’s daughter, Fallon, is none the pleased. The original Dynasty had drama and catfights, and it also featured one of television’s first gay characters in Steven Carrington, Blake’s son. Unfortunately, Steven’s treatment by his father and by the show in general was seriously homophobic. As TV Guide reports, Steven’s sexuality was the driving rift between Blake and his son, and Blake used to say things like he was setting a foundation called “The Steven Carrington Institute for the Treatment and Study of F*gg*try." Not a good look for any time, really, and certainly not one that fits in with today’s landscape. In the reboot, as Schwartz said, Stephen is out and proud and his sexuality is not the source of trouble with Blake. He said:

"When we come into this show, Stephen is confidently gay and not toying with his sexuality. He is not trying to figure it out. He is gay and Blake accepts him. What they battle over are things like fracking and environmental causes. We sort of assume that even in the more conservative pockets of the South where the show takes place, a lot of the dynamics have evolved [since the original show]."

Another way the show is shaking off its homophobic past is by the introduction of another gay character. Heather Locklear played Sammy Jo in the original, but in the revival, Sammy Jo has been transformed into Sammy Joe, Cristal’s gay nephew, played by Rafael de La Fuente. He and Stephen hook up in the pilot episode, and it isn’t a BFD. It's just treated as another hook up, no different than that between a straight man and woman, and that's pretty groundbreaking, too.

The new cast of Dynasty is also way more diverse than the original. Jeff Colby was a rich white guy who married Fallon in the original, but in 2017, he’s a black tech billionaire that made the program that made his money while he was working at Carrington Atlantic. This does not please Blake, and it does not especially please Blake when Jeff and Fallon seem like they’re becoming an item. Schwartz told the Television Critics Association’s press tour that these new dynamics leave the series with plenty of room to play. He said:

“It’s not just that he’s African-American, but he’s new money. In the old version, the Carringtons were nouveau riche compared to the Colbys. We are flipping that dynamic. Jeff is a tech billionaire who honed what was going to make him a billionaire while he worked for Blake. That’s a point of resentment for Blake. So that allows us a lot more dynamic storytelling. We’re also trying to tell the story of Blake, Atlanta, the Carrington family. There is one foot in that old-world boys’ club, the South. And then Blake is surrounded by this teeming, very modern, diverse exciting city. So, we wanted Blake’s journey and Atlanta’s journey to mirror each other.”

Dynasty may be about the one percent, but it's not ignoring that in the rest of the world, things are at an all-time anxiety high. The pilot episode makes an unnamed reference to the Trump family (Fallon refers to "the family you voted for"), and Cristal's character switch-up was deliberate. In her new backstory, she's Venezuelan, and she left her home country in search of a better life in the United States. "There's an almost civil war that's about to break out [in Venezuela]," said Nathalie Kelley, who plays Cristal. "So, a lot of her secrets [now] stem from poverty and fleeing a country that is breaking down. Some of the things she's covering up, she had to do to survive."

Dynasty is certainly not Masterpiece Theater — it's campy, ridiculous, and over-the-top — but it's definitely a soap opera for a new age. The fighting and crazy plot lines will stick around, but with a whole fresher and more inclusive vibe, which is really what any reboot should do — right the wrongs of the original, while keeping things fresh, fun, and familiar.