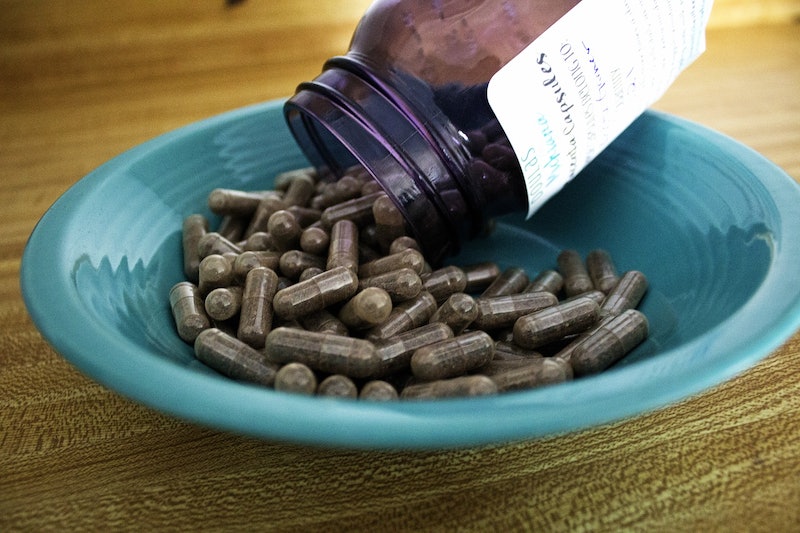 All the celebs seem to be doing it. From the Kardashians to Mayim Bialik to Alicia Silverstone, celerity moms are touting the benefits of eating their placentas after they give birth. But, a new report uncovers the dangerous truth about eating your placenta. Bialik cited that the placenta's protein and iron-rich properties are critical in helping the mother's body recuperate after giving birth. However, CDC’s Morbidity and Mortality Weekly Report noted that freeze-dried placenta pills taken by a mother were likely the cause of one baby's life-threatening strep infection.

The report stated that the "pills likely increased the strep bacteria in the mom’s intestines and skin, from which the baby picked up the bacteria." While many of us are quick to jump on the celebrity bandwagon, Catherine Caruso of the Scientific American reported that Timothy Caulfield, a health law professor at the University of Alberta, and author of the book Is Gwyneth Paltrow Wrong About Everything?, noted that placental consumption is one of many health phenomena lacking scientific evidence that has been popularized by celebrities.

"I really think that, but for people like Kim Kardashian and other celebrities, people wouldn’t be doing this, they wouldn’t be considering it, it wouldn’t be so popular," Caulfield said in the Scientific American. "The power of celebrity culture is profound, and I really think this is an example of it."

Caulfield recommend that when it comes to making decisions that could affect your health, or the health of your baby, it's best to ignore celeb trends, which is easier said than done.

"Social media allows celebrities to channel health advice to their fans in a way that feels more conversational and tangible," the Scientific American reported. "Kim Kardashian, for example, has posted repeatedly about placenta pills on Twitter and Instagram, including a photo of a glass canning jar full of pills labeled 'Kim, Your Amazing Placenta.'"

According to the CDC report, placenta ingestion has been promoted to postpartum women for its physical and psychological benefits, although scientific evidence to support this is lacking. Eating placenta is done myriad ways. Tissue is consumed raw or prepared by cooking, desiccation, preservation, and via other modalities like turning it into freeze-dried capsules.

You can even set up a service before you give birth to have your placenta made into capsules, though you must report pre-existing infections with HIV, hepatitis, herpes, chlamydia, syphilis, and Lyme disease; however, you might not be asked about intra- or postpartum infections, the report stated, and what's more, you might not even know you have an infection.

In the case of the baby with strep, the infection was determined to be caused by the mother taking placenta capsules that were infected with the virus while she was breast feeding. Once she ceased taking them the baby was able to be successfully treated, and fully recovered. While this story has a good outcome, popping placenta still seems like risky business.

"What you really want to wait for is a body of evidence,” Caulfield noted in the Scientific American, which reprinted the interview from STAT. “Look for trusted sources of information that aggregate the science. That’s what you want. You don’t want sources that hype a single study, you don’t want to take advice from a celebrity, you don’t want to use anecdotes and narratives as evidence.”

I must admit to being guilt of jumping on the celeb-advice bandwagon. While I haven't eaten placenta, I recently decided to go vegan after watching several damning documentaries about agriculture's negative impact on the environment, and researching celebrity vegans who all praised this righteous lifestyle.

What we often forget is that celebs have money and resources we can only dream of. Three weeks into my vegan journey I was suffering from migraines, my digestive system was a mess, and I was more tired than I've ever been in my life, despite eating constantly and taking supplements.

A little more research — which I should have done before making this drastic lifestyle change — revealed some of the issues many people's bodies have adjusting to being vegan. But if Ellen can do it, why can't I? I have to remember that Ellen likely has a private chef preparing her nutritionally balanced meals, and for me to succeed as a vegan I was going to have to devote a lot of time and money to meal prep.

Lauren Graham devotes an entire chapter to this in her book Talking as Fast as I Can: From Gilmore Girls to Gilmore Girls and Everything in Between. In the chapter "You Can't Be Vegan Just For Ellen" she details how she, too, is susceptible to adopting trends, like becoming vegan, because someone she admires is doing it.

"She [Ellen] gave me opportunities I'd never had before, and it's like I wanted to repay her by being more like her, which if you think about it is also the premise for the stalker movie Single White Female," Graham wrote. "It's great to look up to people you admire, but you can't make life decisions motivated by the hope that you'll be invited to Ellen and Portia's to eat lentils and watch Scandal."

But, I digress, let's get back to the placenta. For now, maybe you shouldn't eat it.

More like this
Constance Wu On Self-Doubt, Family Drama, & Her Sister's Unwavering Support
By Constance Wu
This Psychological Effect Might Be Keeping You From Hitting Your Goals
By Lexi Inks
Bennifer, Kravis, & 14 Other Fun Celeb Couples Halloween Costume Ideas
By Emma Carey and Brittany Leitner
Twitter Has So Many Thoughts About ‘Don’t Worry Darling’ After Its Release
By Stephanie Topacio Long
Get Even More From Bustle — Sign Up For The Newsletter