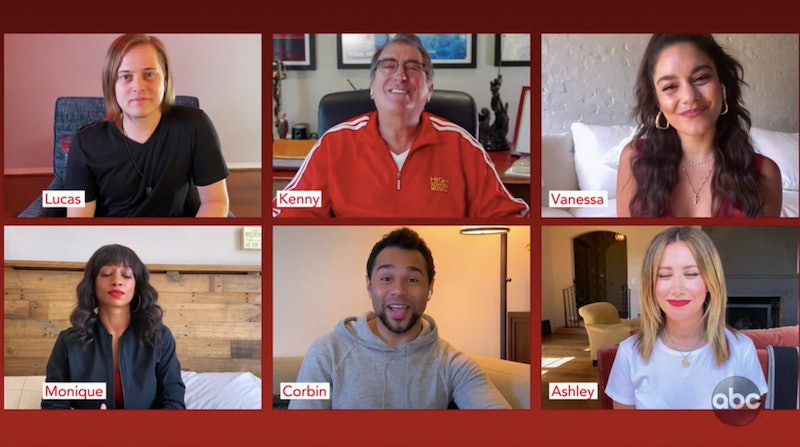 Nearly 12 years after the final High School Musical movie aired, the original cast reunited for Disney's Family Singalong to perform "We're All In This Together" — well, via Zoom, that is. Vanessa Hudgens, Ashley Tisdale, Corbin Bleu, Lucas Grabeel, Monique Coleman, and HSM director Kenny Ortega all logged in to sing together while safely sheltering at home due to the COVID-19 pandemic. And they were joined by a few special guests: the cast of Disney+'s TV spinoff, High School Musical: The Musical: The Series, as well as, for some inexplicable reason, TikTok star Charli D'Amelio.

Zac Efron also joined in...he just didn't sing, much to the chagrin of everyone watching. "Wait y’all telling me that I WAITED all night for Zac Efron to reunite with his cast of HSM for him not to sing!?!?" wrote one viewer on Twitter. Added another: "Now how the f*ck could they not get Zac Efron but got Charli."

Efron did, however, introduce his "oldest friends" with a grainy video message that looked like it was filmed on a flip phone, which Singalong host Ryan Seacrest said was because the actor was "hunkered down in the middle of nowhere with patchy wi-fi."

This follows suit with Efron's appearance in the 2016 High School Musical reunion, which was filmed for the first movie's 10th anniversary. While the rest of his castmates reunited in person, Efron recorded speaking segments that were then cut into the special. A Disney spokesperson told Billboard at the time that this was because the taping conflicted with promotion of Efron's movie Dirty Grandpa.

Even amid a global pandemic, the man is nothing if not consistent.

If you think you’re showing symptoms of coronavirus, which include fever, shortness of breath, and cough, call your doctor before going to get tested. If you’re anxious about the virus’s spread in your community, visit the CDC or NHS 111 in the UK for up-to-date information and resources, or seek out mental health support. You can find all Bustle’s coverage of coronavirus here, and UK-specific updates on coronavirus here.

More like this
The 'Ugly Betty' Cast Just Reunited In The Best Way
By Sam Ramsden
Lindsay Lohan Just Recalled A Hilarious 'Parent Trap' Story
By Sam Ramsden
This 'Black Panther' Character Is Starring In Her Own Marvel Show Next Year
By Grace Wehniainen
The First Trailer For 'That '90s Show' Includes So Many Nods To The Original Series
By Jack Irvin, Alyssa Lapid and Grace Wehniainen
Get Even More From Bustle — Sign Up For The Newsletter