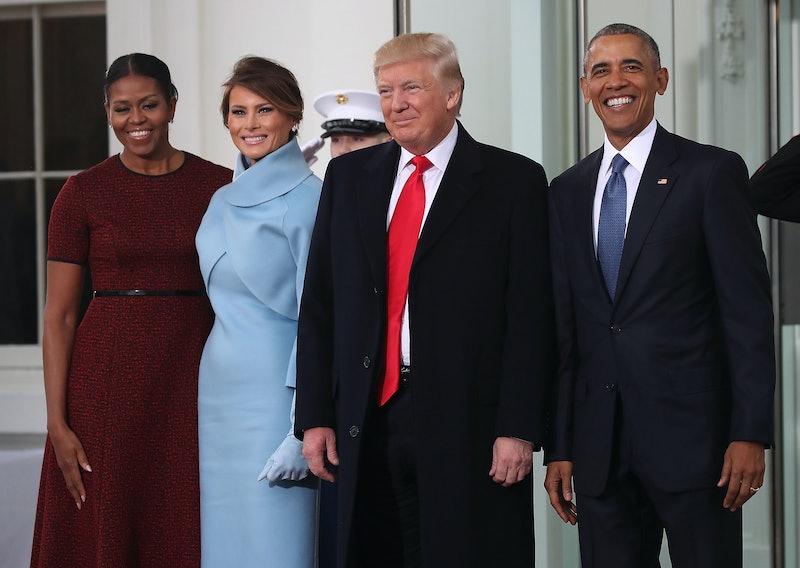 Millions of Americans woke up with fear and dread in their hearts today anticipating the inauguration of Donald Trump to the presidency, but the current president greeted the incoming one with a warm smile. As part of the longstanding Inauguration Day traditions, the Obamas welcomed the Trumps to the White House before the swearing-in ceremony for tea and some last words of wisdom. The moment, caught on camera by the ever-present White House press pool, seems incongruous at first, but in some ways it's a relief to see. The first photos of the Obamas and Trumps together at the White House are actually kind of reassuring, mostly because they show that Obama may be an important resource for Trump during his administration.

It's really nice to see Obama appear genuinely happy to hand over the reins, because he deserves it. After eight years of getting more crap and criticism than any other president in history, he deserves a long break. And even though this isn't who he wanted to be passing his legacy to, at least he looks like he's experiencing the relief of taking the weight of the country off his shoulders. No matter how badly things go downhill from here, it's not Obama's responsibility anymore and he at least seems delighted in that.

It's also a great comfort to see that Trump and Obama's relationship, if not warm, is a polite one. Given that the president-elect is so inexperienced and susceptible to change, these photos provide hope that Obama might be able to teach him a little bit of measurement and progressive thinking if Trump ever reaches out for advice. The pictures even make that seem like more of an option than once ever seemed possible — Trump built the very beginnings of his political career on delegitimizing Obama, but they seem amiable enough that Trump may ask for help if, or more likely when, he gets in over his head.

On some level, the Obamas probably feel the same bitterness and betrayal about Trump's election that many active and invested liberals do. However, they also have a unique perspective on his upcoming administration that allows them to step back and truly wish him their best. They know how hard it is to do this job, even when you're prepared for it, and the next guy who signed up for it has no idea what's about to hit him. It's not an ideal situation at all, but it is the real situation, and it's better for Obama to be available for Trump's counsel if needed. These pictures hint that that may actually be an possibility, and that's as much relief as people can get right now.