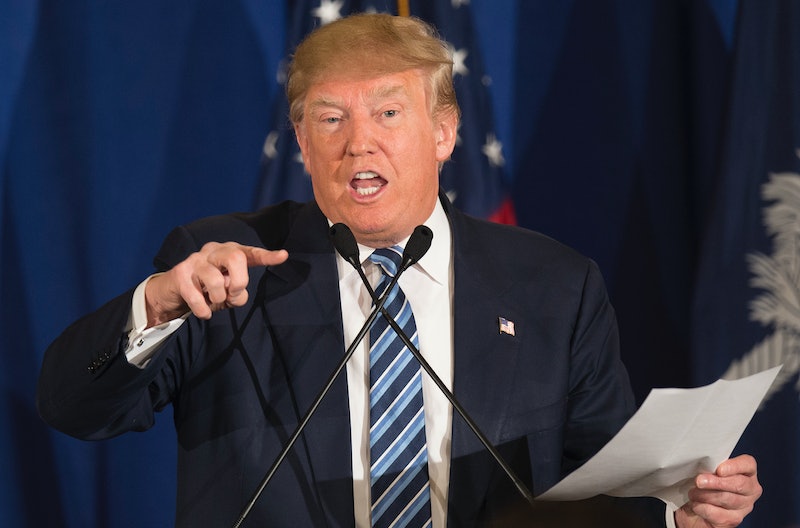 Hey, remember back during the early presidential campaign, when Donald Trump was still a long-shot candidate, more a figure of amusement than a serious contender? It was during that fateful stretch of pre-primary rallies and interviews that Trump found a golden ticket to audience engagement and voter base loyalty. As early as May 2015, he'd already introduced the idea of building a fence (later to be defined exclusively as a wall) spanning the entire U.S. border with Mexico. But once his candidacy evolved into something resembling a movement, Trump began emphasizing one promise about his "big, beautiful wall" — that Mexico would pay for it — as a call-and-response mantra, the true Trump believer's incantation. As of yesterday, however, Trump is asking Congress to pay the border wall tab.

Update: Mexico's president wrote on Twitter Friday morning: "Trump may ask whoever he wants, but still neither myself nor Mexico are going to pay for his racist monument. Another promise he can't keep."

Yes, all the House representatives and senators from across the nation will have to vote on whether or not to pony up the money for this massive undertaking. Cleverly, Trump sneaked funding for his wall into a larger bill that must either pass by April 28, or risk a government shutdown. It goes without saying that most Republicans will support Trump's wall, but Democrats are in a trickier position. Obviously, they largely oppose it, but government shutdowns are never popular with voters. Just ask Republicans circa 2013 how their shutdown stunt worked out (hint: not well).

Of course, when someone says that "Congress will pay," it translates into "voters will pay." Congress itself doesn't manufacture money, but rather budgets around tax dollars, all of which come from working Americans. It was also absurd to assume that the Mexican government could somehow be persuaded to tax its own people for a wall they're not interested in. But the glittering, magical promise of exactly that animated thousands of exuberant Trump fans throughout the primary and general election. Trump can hardly afford to renege entirely on his oft-repeated campaign promise. And per his most recent tweet on the topic, Trump continues to bandy about the notion that Mexico will pay. They'll just pay later. Because, why wouldn't Mexico do that?

What remains to be seen is whether or not Americans will pay for this undertaking. Die-hard Trump supporters will probably refrain from rebellion over the funding issue, especially since the president-elect still insists that, someday, Mexico will refund the expense. But less dedicated Trump voters, and Clinton voters, not to mention the millions of Americans who stayed home on Election Day, may punish congressional Republicans for adding billions of dollars to the deficit for a border wall that many experts, not to mention voters, do not support. No one can fire the president, but they can put his party out of majority status in the House and Senate. Republicans would be wise to consider the potential repercussions of agreeing to pay for Trump's border wall.