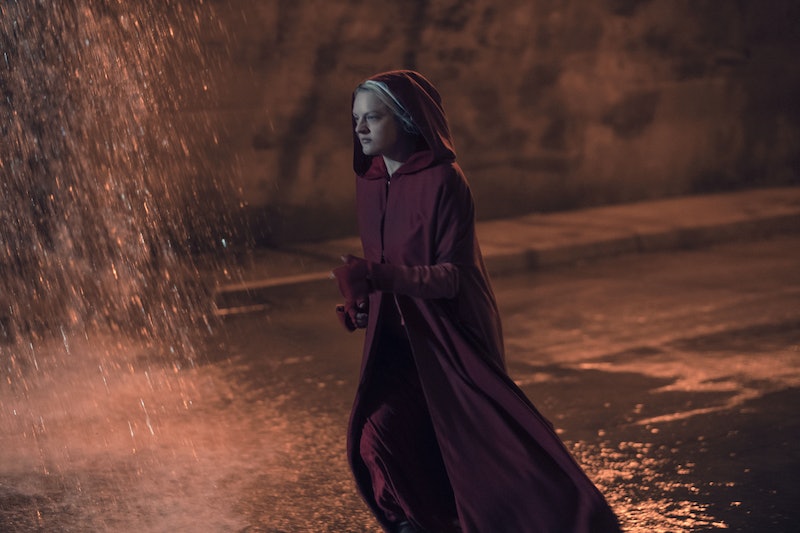 The Season 2 finale of The Handmaid's Tale shocked many fans when June opted to stay and fight the Gilead regime instead of leaving to be with her husband and daughter, but if The Handmaid's Tale Season 3 trailer, which Hulu released on Tuesday, May 1, is any indication, that decision isn't going to be for nothing. June's revolution has officially begun and she is using any means she can to bring this totalitarian government to its knees.

This means aligning herself with people in power, starting with her boyfriend Nick and her former enemy-turned-ally, Serena Joy Waterford. It may just be the small assembling of a team, but June's determination throughout the clip makes it clear that she is on a mission to make the resistance stronger than ever before. "You seem like you'd be good at influencing people," Bradley Whitford's Commander Joseph Lawrence (and founder of the Colonies) tells June in the trailer. So consider him another powerful source June might be able to tap into to fulfill her goals. Of course, the trailer shows that she still misses her family, but this revolution is the key to putting this nightmare to an end — and June intends to see it through.

Another interesting moment comes when viewers are able to catch a glimpse of Aunt Lydia, who still looks a little worse for wear after Emily's shocking attack on her in Season 2, but she's still very much alive. The actor who plays her, Ann Dowd, confirmed to The Daily Beast back in July 2018 that Aunt Lydia survives and would be in the show's third season, though it's unclear where her loyalties now lie.

Up until this point, she was still very much on Team Gilead, helping to hone and train all of the Handmaids for various Commanders and their families. However, the placement of her brief cameo in the trailer may leave fans wondering if she's thinking of switching sides. "If I'm going to change things, I'm going to need allies. Allies with power," June states during a voiceover and her little speech just so happens to end by cutting away to a shot of Aunt Lydia herself. Could this indicate that she will be one of the allies with power June is referencing?

Fans will just have to wait until Season 3 debuts to know for sure, which won't be much longer now. Along with the new footage, the trailer also once again confirmed the Season 3 premiere date to be June 5, which is just a little over a month away. Blessed be the fight.