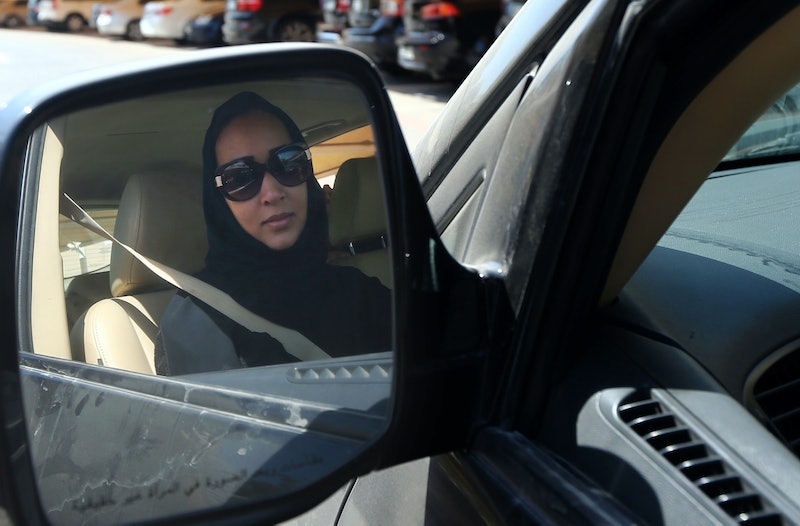 It's 2017. Anybody who thought that sexism was dead clearly wasn't paying attention through any of 2016, or indeed any of the years before that. But there are different kinds of gender discrimination, and one of the most problematic is the legal kind, where, whether through legal loopholes or explicit statutes, women's rights are marginalized, ignored, or blotted out altogether. From child marriage to marital rape to the right to drive, current laws of outrageous sexism (and seriously problematic human rights status) continue to sit firmly in place in various countries worldwide. Yes, including the in the United States. No, I'm not surprised either.

A lot of the feminist story worldwide involves challenges, not only to patriarchal concepts and expectations, but to to the legal structures that allowed them to flourish. The vast Polish strike and street march against a proposed new law vastly restricting access to abortion in 2016 was one in a long line of fights against legal impositions on women's rights.

Getting a law overturned can take a long time, and international outrage is often not sufficient to hit the turning point; but with awareness, activism and a changing tide of public opinion, things may soon get better for the women in these countries. Let's hope.

According to a review of global law in 2013, 93 countries around the world allow women to be married under the age of 18 if the parents consent, or if religious law allows for it. This isn't just distressing; it's heinous. Laws of this kind put girls in marriages (and sexual relationships) they may not consent to, risking their future health, education, and their fundamental human right to self-autonomy. The International Women's Health Coalition estimates that up to 37,000 women under the age of 18 are married every day.

And it's not just in other countries; in 2016, Virginian laws were examined because they had "pregnancy exceptions" for girls under 18, resulting in the marriage of 4,500 minors between 2004 and 2013. And in New Jersey, the vast majority of the 163 children married to adults between 1995 and 2012 were underage girls marrying adult men, a situation that is actually statutory rape under national law. The notion of a minimum age of marriage not applying if the girl is pregnant still holds in other states, and many have laws that allow people under 18 to marry with parental consent, without investigation into whether the children are being coerced.

The (Lack Of A) Right To Drive, Saudi Arabia

It's one of the most well-known sexist laws in the world: in Saudi Arabia, women aren't allowed to take the wheel. It's been challenged for years, in places as diverse as MIA's video for "Bad Girls" in 2012, which featured numerous women in hijab and niqab driving cars in a Saudi-esque landscape (which was actually Morocco, to avoid the arrest of the film crew). More recently, social media has seen protests in the country itself, including #IWillDriveMyCarJune15 in 2016, in which Saudi women filmed themselves at the wheel or noted their support of people who did.

In 2013, India passed amendments to its Penal Code, first established in 1860, with important new definitions about rape and its classification. However, human rights campaigners worldwide noticed something extremely alarming. There were "exceptions" to the law, one of which was the following: "Sexual intercourse or sexual acts by a man with his own wife, the wife not being under fifteen years of age, is not rape." Shockingly, the notion of husbands being protected from rape allegations by wives was enshrined in American law until 1977, even though it was a massive matter of concern to 19th century feminists, according to legal historians. The India law remains in place. It's also not alone; in Lebanon, for instance, marital rape can only be proven if there are actual signs of violence, while in Yemen, Nigeria and elsewhere, it's not illegal.

This one is at least on its way to being destroyed — in April 2016, the Jordanian Cabinet announced that it was in favor of cancelling a segment of Article 308, a part of the country's law. The segment in question, horrifyingly, says that men who rape women will go free if they agree to marry their victims and not divorce for five years. It's been open to horrific abuses over the years, with underage rape victims being forced into marriages arranged by parents and the families of the perpetrators. It's attracted increasing protests, including marches and demonstrations, but it remains to be seen what new law will be put in its place.

There are several countries worldwide where the right to vote isn't universal. Lebanon, however, is a different matter. Women there must meet a minimum educational standard before being allowed to vote, while men don't need any education at all. They also have the option not to vote, while voting is compulsory for men. The results have been predictable, if sad; while Lebanon was actually among the first to offer suffrage of any kind to women in the Middle East, in 1952, it's got one of the lowest parliamentary presences of female elected officials in the world. In 2015, only 3.1 percent of its total parliamentary seats were occupied by women.

It's just the most glaring of the assemblage of sexist laws in Lebanon, unfortunately. Religious laws of various kinds fail to protect against marital rape or allow divorce in the case of spousal abuse.

As citizens of the world, we've all certainly got a long way to go before women achieve legal equality.

More like this
Women Around The World Are Cutting Their Hair In Solidarity With Mahsa Amini
By Darshita Goyal
A New Portrait Shows King Charles With William & Kate Before The Queen’s Funeral
By Stephanie Topacio Long
Holly Willoughby & Phillip Schofield #Queuegate Drama, Explained
By Sophie McEvoy
New Coins Unveiled As King Charles III's Reign Gets Underway
By Sam Ramsden
Get Even More From Bustle — Sign Up For The Newsletter