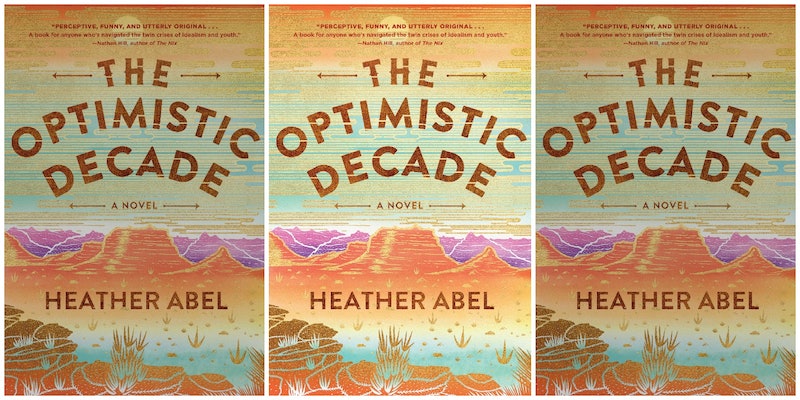 Heather Abel’s debut novel might be set in the post-Cold War, pre-Gulf War summer of 1990, but the story she tells — one of activism and idealism, wealth and inequality, the fissures between “blue collar Americans” and the “educated elite”, couldn’t be more timely. The Optimistic Decade transports readers to a back-to-the-land, commune-style camp that caters to the children of liberal, upper middle class, west coast parents who pay for the privilege of their children to pass a summer in chosen austerity — once-a-week showers, limited electricity, sleeping outdoors on unadorned wooden platforms, sharing in physically-demanding camp chores, taking strenuous character-building hikes.

The camp — Llamalo, (“why not?” in Hebrew) — is run by a zealous twenty-something named Caleb; known for giving charismatic speeches about how he single-handedly saved Llamalo’s land and sleeping with a different camp counselor every summer. Caleb’s cousin, Rebecca — fresh out of her first year at UC Berkeley and majoring in a self-designed field of study: “third world revolt and media,” — is an unwilling counselor, banished to Llamalo by her father who (unknown to her) is spending the summer shutting down her beloved, family-run, liberal newspaper, Our Side Now. And high school senior David — Rebecca’s former childhood friend and camp devotee — aspires to drop out of his final year of high school and move to Llamalo permanently.

"...the story she tells — one of activism and idealism, wealth and inequality, the fissures between “blue collar Americans” and the “educated elite”, couldn’t be more timely."

Caleb, Rebecca, and David stand in sharp contrast to the other two characters who make up the heart of Abel’s novel: Don and Donnie Talc — the father-and-son ranchers to whom Llamalo’s sparse, hard-worked land once belonged. Donnie, recently radicalized by an organization called People for the West!, is convinced Caleb’s acquisition of the Talc’s land was part of a national conspiracy involving Exxon oil and environmentalists, and is determined to take his ranch back from the “eco-Nazis" who stole it from him. And so, the battle unfolds: one between the rural poor and the over-educated youth purporting to save them.

The Optimistic Decade has been read as a metaphor for the ongoing conflict in Israel and Palestine — a generation of idealistic Jews (Caleb, Rebecca, and David are all somewhat lapsed) building the holy land of their dreams on someone else’s desert. But the novel also speaks directly to our current political moment in the United States, addressing idealism of youth alongside futility of activism, the audacity of optimism alongside the heartbreak of disillusionment.

“My assumption was simple,” Rebecca’s father, Ira Silver, writes in his final letter to his readers. “Devote enough column inches to the topic, and justice would come. Today that strikes me as a particularly narcissistic delusion. Look around. Eight years of articles about Reagan led only to the election of Bush.” (Imagine what Ira would have to say now.) And with the sting of shattered ideals, Our Side Now distributes its final issue.

"But the novel also speaks directly to our current political moment in the United States, addressing idealism of youth alongside futility of activism, the audacity of optimism alongside the heartbreak of disillusionment."

For Rebecca, who finds out the paper has shut down the same way all the Our Side Now readers do — with the arrival of the final issue — the end of the paper is the end of the politics she’d been raised on and the ideals she’s planned on dedicating her life to. But it’s also the end, in many ways, of who she understands herself to inherently be. “The thing is, he’s right. Ira’s right,” she says to David. “It makes me sick all the time. You go to a million rallies and make a million calls and still your candidate isn’t elected, or if he is, he takes money from Exxon and plays golf with the health insurance lobbyists. There’s nothing we can actually do, right?” Every voter who considered a Trump presidency impossible, until it wasn’t, has undoubtedly been here too.

David has his own moment of heartbreak, when he discovers Llamalo isn’t all he’s believed it to be, and his commitment to Caleb’s utopic vision hasn’t turned out at all the way he’d planned. And, for all his conspiracy-fed fervor, Donnie is clobbered by the shattering of his own ideals as well — ultimately realizing that his land will never be his again and that his actions have contributed to the severing of the last remaining tie he and his father had to their ranch. Before The Optimistic Decade’s end, the Talcs have left Llamalo behind forever.

"And, for all his conspiracy-fed fervor, Donnie is clobbered by the shattering of his own ideals as well..."

Still, of all Abel's layered, imperfect, hypocritical-in-their-own-ways characters, it’s Rebecca who perhaps has the farthest to fall. “Disillusionment was her true inheritance,” she thinks. “The very opposite of the buoyant idealism she’d pretended was passed down like an heirloom... The despair had been tempered by a golden aura of self-importance: nobody will come to the rally, but still we go; nobody will cover the rally, so we write about it; nobody will publish our point of view, so we’ll start a newspaper, which nobody will read but us,” — pinpointing the often insular nature of activist life: the preaching to the already-converted, engaging primarily with those who reinforce one’s own point of view, often unknowingly.

Rebecca's experience might be considered compassion fatigue — the fallout of caring too deeply about a world that does not care in return. It might just be the natural progression of growing up — there is, after all, an uncomfortable privilege to protest: those who suffer the greatest injustice often can’t afford, financially and otherwise, to spend their days marching in the street. There are bills to pay, families to care for, prison sentences to serve. (As my mother once chastened me, when I spent my days Occupying Wall Street: “stop sitting on your ass in a park and get a job.”) Rebecca's fall from idealism is, nonetheless, devastatingly relatable. No matter how many times the world tosses optimism back in our face, there's a clobbering hope that even if we can't cling to our optimism, someone out there will continue to fight the good fight; continue to cling to theirs.

"Rebecca's experience might be considered compassion fatigue — the fallout of caring too deeply about a world that does not care in return. It might just be the natural progression of growing up — there is, after all, an uncomfortable privilege to protest."

Which is why Rebecca's return to optimism — albeit a little less rose-colored, a little more hard-won, and (hopefully) a little more resilient — will leave readers with something to hope for. Home for the winter holidays from her second year at Berkeley, Rebecca, in a sudden moment of surprising faith, finds herself standing in a protest outside the Federal Building, just as the Gulf War is heating up. “We’re going in, taking over the building,” an activist, dressed all in black, says to her. “Are you up for it?” he asks, reaching for her hand. Though we don't see her follow him, readers can safely assume Rebecca does. Because even in the face of unthinkable darkness, we can’t help but lean into the light.