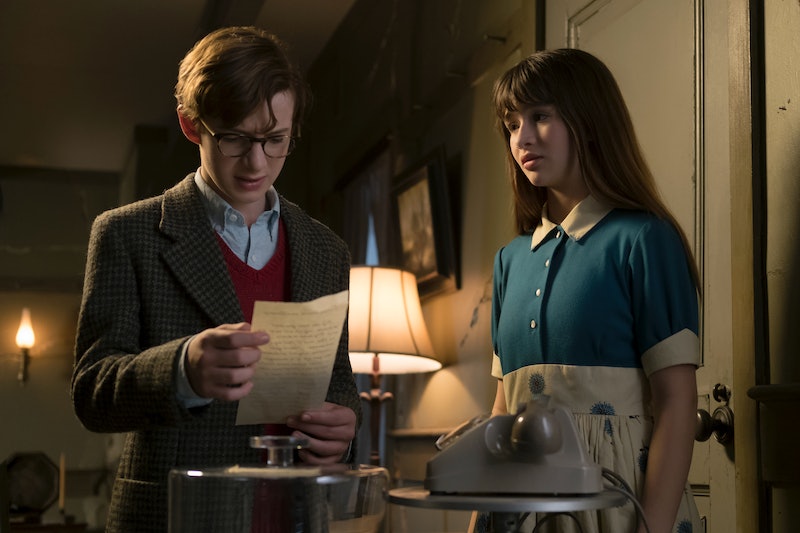 The Netflix series is a fairly faithful adaptation that sticks to the basic plot of each novel while teasing bigger themes and mysteries from the series. It helps that author Daniel Handler was an executive producer on the series and a credited writer, so he had a hand in seeing what Netflix would make of his original stories.

The theme songs, which are tailored to each episode, are reminiscent of the Gothic Archies songs that accompanied each ASOUE audiobook. Every other episode, which marks the beginning of a new book adaptation, even begins with a dedication to Beatrice, though the "letters to the editor" are not in the series.

Book by book, here are some other differences.

In the books, Eleanora Poe is the banker's sister, not his wife. After the performance of The Marvelous Marriage, Justice Strauss rules the wedding illegal without Klaus' help, and Count Olaf does tell the Hook-Handed Man to let Sunny go. In the series, Klaus does some legal analysis to convince the judge and Sunny is let go after winning a game of poker. On the page, it is also Violet, with her technical prowess, who restores the lights to the theater after Olaf and his cronies make their escape.

One of the biggest differences in the series is the early introduction of V.F.D. and its members. Lemony Snicket actually hints at its meaning very early on. We even meet Gustav Sebald sooner in the Netflix series, though his associate Jacquelyn is not a character in the books.

The "Yessica Haircut" sequence, while hilarious, is an invention of the show that helps explain exactly how the Baudelaire orphans came to be in Count Olaf's care in the first place. The episode also introduces the adventures of two kidnapped parents, which is not in the books.

While the Incredibly Deadly Viper is taken away in the book series, Sunny's slithering pal is free at the end of the show. The viper is also not accused of murder in the book, though his relationship with Sunny is used to confuse the adults and buy the children some time.

Monty actually gets the message in Zombies In The Snow this time around. In the book, it is Monty's plan to take the children to Peru all along. Additionally, the Sebald Code works differently in the show than it does in the books. Monty uses subtitles and a V.F.D. spyglass instead of the dialogue.

Again, anything that Jacquelyn does, especially when it comes to revealing secrets to Klaus, Violet, and Sunny about their parents' organization, is different on the show.

Another faithful adaptation, save for the fact that the Baudelaires' unknown V.F.D. allies comes into play more here as well. In the book, it is Violet's decision to cause an allergic reaction with peppermints, while a V.F.D. waiter at the Anxious Clown helps them in the series. They also have some unexpected help from the two adventuring parents, who are flying overhead.

The biggest departure comes at the end. Having lost faith in the adults that surround them, the three children run away to seek out Paltryville and Lucky Smells Lumbermill on their own, which isn't how it happens in Snicket's series. They have also found a photo of the former members of the V.F.D. in Josephine's safe. In the books, Mr. Poe takes them there next and there's no photo.

One happy change is that the romantic nature of Charles and Sir's partnership is made more clear in the show than in the books. In the Netflix series, the orphans become mill employees because they were trespassing. In the books, they were placed there by Mr. Poe. Speaking of, Eleanora's investigation is also new. The foreman is the Hook-Handed Man in disguise on the show, but in the books he is revealed to be another member of the theatre troupe.

Olaf is locked in the library in the book, but escapes a different way in the series. Also at the end of the TV series, Georgina dies by falling into the furnace instead of the buzzsaw, in a possible allusion to Sweeney Todd: The Demon Barber of Fleet Street. Plus, there's a worker riot in the series, and Sir flees the scene with Charles in pursuit.

We also see a bit more of Lemony Snicket's life outside of narrating the events of the Baudelaire story, as he puts together his research and escapes enemies.

The final moments of A Series Of Unfortunate Events Season 1 show the Baudelaire orphans arriving at Prufrock Preparatory School. The two surviving Quagmire triplets, Duncan and Isadora, are there as well — and they have the other half of the spyglass. It looks like the two sets of orphans will meet each other outside of Vice Principal Nero's office instead of in the cafeteria, which is a tiny change.

In fact, all three Quagmire children are introduced in the Netflix series earlier than they are in the books — though, as fans of the books know, Quigley won't return for quite some time. We see the three of them at home, and it's actually their parents who we've been following all season.

In all, there are some changes made in the Netflix series, but most of them serve to move the episodes and the story along in a way that works for television.

More like this
Nicola Coughlan Shared A Lady Whistledown Excerpt From ‘Bridgerton’ Season 3
By Grace Wehniainen, Alyssa Lapid and Sam Ramsden
Viserys’ Fate On 'House Of The Dragon' Could Differ From The Book In This Surprising Way
By Grace Wehniainen
There's At Least 1 Major Difference Between The 'Vampire Academy' Book & TV Series
By Grace Wehniainen
Ruth Wilson’s New Thriller Spotlights A Controversial Irish Institution
By Darshita Goyal
Get Even More From Bustle — Sign Up For The Newsletter

This article was originally published on Jan. 13, 2017