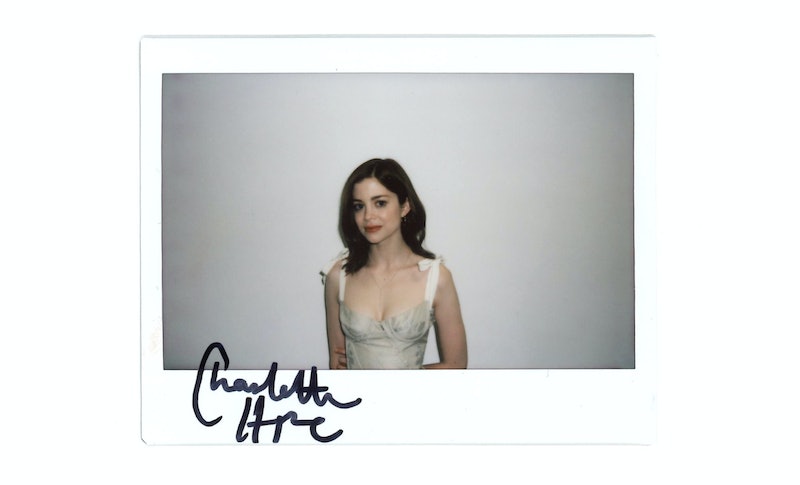 When celebrities hang out with Bustle writers, we want to give them the chance to leave their mark. Literally. So we hand them a pen, a piece of paper, a few questions, and ask them to get creative. This time, The Spanish Princess star Charlotte Hope is leaving her mark in the Bustle Booth.

History doesn't necessarily remember Henry V's first wife Catherine of Aragon as a villain, but the characters on the new Starz series The Spanish Princess are certainly wary of her ambition. For actor Charlotte Hope, this is not new territory — most fans will recognize her as Myranda, Ramsay Bolton's sometimes sadistic mistress on Game of Thrones. Both characters are doing what they have to in the name of love and power, and both are regarded as a little bit conniving as a result.

"I was really on Myranda's side," Hope says. "This girl has come from nothing. She was a kennel master's daughter, she had no money. She's living in this very cutthroat world and she sees a way to better her situation. She would have starved!" Plus, as twisted as it is, "she really loved Ramsay," Hope adds. "Everyone was like, 'You were so evil,' and I was like 'No, I wasn't. I was in love. They're very different things.'"

In The Spanish Princess, Catherine arrives as a foreign royal betrothed to the prince of England. Her Spanish customs and staff baffle the English royals, and so she has to think quickly in order to maintain her position when things go awry. "That's the only power she had in the Tudor court," says Hope. "She could be a political pawn, but instead she decides to maneuver as best she can so that she can fulfill the destiny of becoming queen."

Hope was excited and encouraged when showrunner Emma Frost told her that she shouldn't be concerned with Catherine being likable; that she can be entitled, conniving, and capable of making the wrong decisions. Even so, while there are some times when Catherine is "Machiavellian," the show also has some genuine moments of female friendship and support. "Much more so than we would expect of a woman of that period of history," Hope adds.

Think of her like the title character in Fleabag, one of Hope's current favorite shows. "You have this really complicated person who is both likable and unlikable. Kind, but also difficult sometimes. I'm like, that's what a woman is. I can be a lot of different versions of myself, and all of them are valid."

What's great about revisiting historical stories like these, particularly in 2019 and with women at the forefront of the creative process, is that it allows us to dig into the humanity of women we don't know much about — the good, and the bad, and the refreshingly complicated. Complex female characters are definitely the future, and The Spanish Princess seeks to reveal that they're part of our past, too.

Get to know more about Hope by checking out her answers to our Bustle Booth questionnaire below.

More like this
On 'The Handmaid’s Tale,' Christine Ko Fights Back
By Gretchen Smail
Ismael Cruz Córdova Loves His Elf Ears
By Morgan Leigh Davies
Is The Serpent Queen Based On A True Story?
By Maxine Harrison
Nicola Coughlan Shared A Lady Whistledown Excerpt From ‘Bridgerton’ Season 3
By Grace Wehniainen, Alyssa Lapid and Sam Ramsden
Get Even More From Bustle — Sign Up For The Newsletter