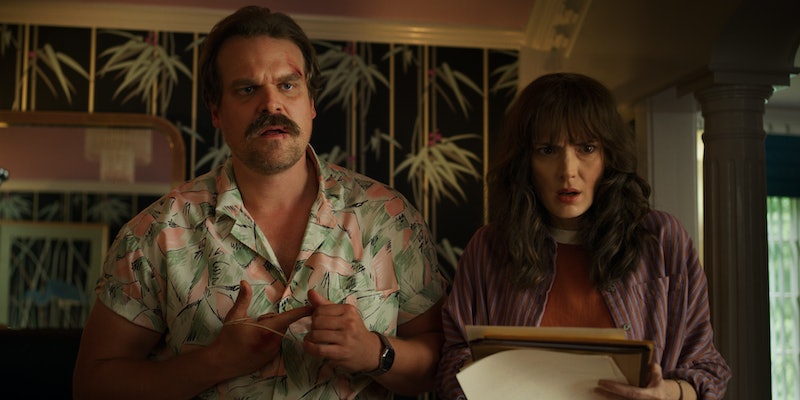 Stranger Things fans, you're going to want to stock up on Kleenex, handkerchiefs, and all the eye drops before the next season starts streaming less than two months from now. Why? Because the Stranger Things Season 3 finale will be the most emotional episode yet, according to star David Harbour.

While at the MCM Comic-Con over Memorial Day weekend, Chief Jim Hopper himself shared a few details about Netflix's Stranger Things 3. Specifically, he talked about how this new season will focus on Hopper's father-daughter relationship with Eleven (Millie Bobby Brown). And yes, this sweet bond is going to give fans all the feels. According to Complex, Harbour told the crowd the finale will be "very, very moving."

Last season, fans saw Hopper and Eleven get closer, with him trying to be the father she's never had. It's a second chance for him since he lost his daughter, whose hair tie we see Eleven wearing throughout the Stranger Things 3 trailer, years ago. This season, Eleven is growing up, Harbour said, "and I think that's the terrifying thing for Hopper. He doesn't like the idea of his baby daughter hanging out with boys."

Not that Hopper's going to be able to stop Mileven (Mike and Eleven's budding ship name) from happening from the looks of the new season, which starts streaming July 4. And that's what really scares him. "His daughter is becoming a teenager and beginning to find herself, so that's scarier for Hopper than any Demogorgon creature that he's going to have to deal with," Harbour told MCM Comic-Con.

Harbour also told the crowd that the eighth and final episode of this new season is going to touch on all these intense feelings Hopper is experiencing for this young girl he's come to love like his own. "You get to see a lot of that throughout the season and it's very unexpected what happens in the end and it's very, very moving," Harbour teased. "I think episode eight is the most moving thing we've ever shot."

"Moving" and "unexpected" are interesting word choices, but they're also rather vague ones. Does this mean that Hopper will give up his life for Eleven? Or, is it something a little less serious than that? No one knows yet. What is clear, though, based on what fans actually do know is that emotions are definitely going to run high this season, which is all about coming of age.

While Hopper and Eleven's relationship will play an important and emotional role this season, star Gaten Matarazzo told Bustle that Dustin and Steve's friendship will play a pivotal role in Season 3. Yes, Mama Steve is back to help Matarazzo's Dustin with more than his hair.

It seems that there are a lot of unexpected moments to come when Stranger Things returns, but definitely expect to be crying through most of them.

More like this
Nicola Coughlan Shared A Lady Whistledown Excerpt From ‘Bridgerton’ Season 3
By Grace Wehniainen, Alyssa Lapid and Sam Ramsden
Caleb McLaughlin Details Racism From 'Stranger Things' Fans
By Radhika Menon
The New Bachelor Will Be Announced Next Week & Here Are The Top Contenders
By Grace Wehniainen
The 'Andor' Timeline, Explained
By Gretchen Smail
Get Even More From Bustle — Sign Up For The Newsletter