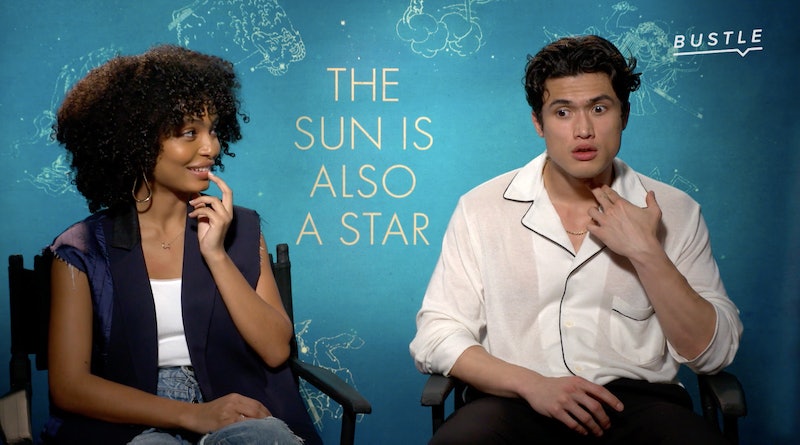 Romantic movies that make you lose your breath and remember just how powerful love can be don't come around every day. There are a few movies in the canon — and lines from those movies — that remain indelible in fans' collective memory. On May 17, The Sun Is Also a Star hits theaters, telling the story of a whirlwind romance that has to be that, because of some serious, encroaching outside forces. At the movie's New York City junket, Bustle challenged stars Yara Shahidi and Charles Melton to test their own knowledge of classic love story lines, and it seems that the future of the genre is in good hands.

Here's how the game is played: Bustle Executive Editor Jada Gomez reads a quote and Melton and Shahidi have to guess what sentimental movie it's from. That's it. Shahid gets the origin of "Nobody puts Baby in the corner" easily, but the lines only get more difficult from there. A mantra from one particular movie musical trips her up, but only momentarily. Meanwhile, Melton proves himself to be as much of a romantic as his The Sun Is Also a Star character, quickly identifying lines from The Notebook and The Fault in Our Stars.

Like most of the great romance movies mentioned in our trivia game, The Sun Is Also a Star includes its fair share of drama and heartache, as the story takes place on the day that Natasha Kingsley's (Shahidi) family is set to be deported from the United States. When the stars seem to align and bring Natasha and Daniel Bae (Melton) together, the stakes for Natasha's move suddenly become even higher. Natasha and Daniel share an instant connection and they're prompted to ponder some of life's biggest questions together, like whether or not fate exists.

The movie is based on the book by Nicola Yoon, who recently told Marie Claire that she personally believes in fate. "I don't know if I would have gotten into writing if I didn't major in electrical engineering and worked in finance. One thing leads to another, and you can never guess how. You don't know where your life is going to take you," the author explained.

The author also told Marie Claire how her idea of fate influenced her in writing a love story like this one. "When two people meet at a moment in time there's all of the stuff that got them to that specific place — the random events with other people they have interacted with that day, their families, their ancestors. There's a huge chain of reaction of things that happen that get you to this point in time," Yoon explained.

The Sun looks at what exactly leads Natasha and Daniel to meet on a day that could have easily gone in the complete opposite direction. If that sounds like it's the kind of soulmate realness that could put this movie on the classics list along with the others in our quiz, that's because it's a real contender. Maybe next time, Melton and Shahidi will be guessing their own lines.